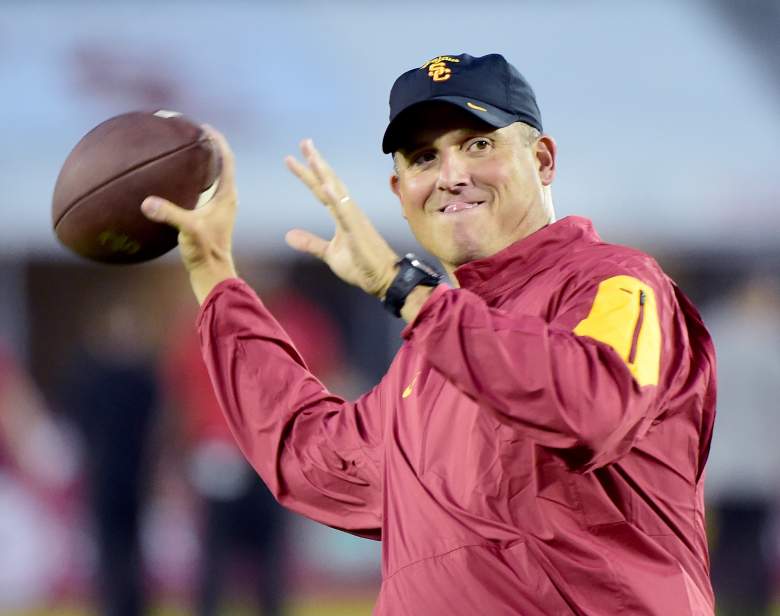 Steve Sarkisian throws as his team warms up before the game against Arkansas State on September 5, 2015. (Getty)

In a surprising move for a team that is making preparations to play in a national championship game, the University of Alabama has announced that incoming offensive coordinator Steve Sarkisian will assume his duties immediately, replacing the now-departed Lane Kiffin for the Crimson Tide.

According to Chris Breece of WIAT TV, Alabama head coach Nick Saban said that Kiffin agreed with the rest of the Tide coaching staff that it was in Alabama’s, and Kiffin’s, best interest for Kiffin to focus all of his attention on his new job as the head coach at Florida Atlantic University. The less-than-impressive performance of the Crimson Tide offense in Saturday’s college football semifinal game against the University of Washington likely was a factor in this decision. For example, Alabama quarterback Jalen Hurts only threw for 54 yards in the game, completing a mere seven passes.

Sarkisian brings with him a good amount of experience in calling plays and having success on the offensive side of the ball, but also some controversy. Here are five things that Tide fans should know about their team’s new offensive play-caller:

1. This is the Second Time that Sarkisian Has Taken Kiffin’s Place

When Alabama hired Sarkisian as an offensive consultant in September, it was the third coaching job Sarkisian has held since 2013 and this becomes the second time that Sarkisian has replaced Kiffin.

In December of 2008, Sarkisian was hired as the head coach at the University of Washington, giving him his first head coaching job in college football. In a twist of irony, it was Washington that Alabama defeated on Saturday night to reach the national championship game.

Sarkisian remained in that position for five seasons, most of which were mediocre at best by the win-loss record. Sarkisian only won eight games in a season once at Washington, and never won more than five Pac-12 conference games in a season.

Regardless, Washington’s Pac-12 rival Southern California hired Sarkisian as its head coach a few months after firing Kiffin, ironically enough. Sarkisian has reportedly been a friend of Kiffin’s for years, and Kiffin said that it was Sarkisian who informed Kiffin that he was being sued by the Tennessee Titans in 2010.

Sarkisian spent all of the 2014 season in that position and began the 2015 season as well, but his problems with alcohol abuse caused him to take a leave of absence from USC to seek treatment in October of 2015. The day after USC athletic director Pat Haden ordered Sarkisian to take the leave of absence, he fired Sarkisian.

Sarkisian had been out of college football since then, until Saban hired him as an analyst in September, praising his offensive mind. Whether or not Saban had replacing Kiffin in mind at the time of the hire is unknown, but that’s how it has worked out regardless.

After USC dismissed Sarkisian following a profanity-laden rant that he gave during a pep rally in which he appeared to be intoxicated, the extent of Sarkisian’s problem with alcohol became public knowledge quickly.

The Los Angeles Times detailed how Sarkisian’s alcohol problems went back to his tenure with Washington. Deadspin stated that Sarkisian showed up to a team meeting drunk at USC as well.

After Haden fired Sarkisian, Sarkisian immediately entered rehab amidst strong support from the school. The good vibes between the parties weren’t to last, however, as McCarton Ackerman of The Fix states that Sarkisian then filed suit against USC for wrongful termination and discrimination, alleging that USC fired him for seeking treatment for his alcoholism. The suit was later settled through mediation.

In the midst of continuing his rehabilitation, Sarkisian was hired by Fox Sports 1 as an analyst. Sarkisian successfully maintained that job until Alabama gave him a contract in September. Ben Kercheval of CBS Sports reports that Saban has made it clear to Sarkisian what is expected of him and what the consequences of a relapse would be.

3. Alabama Hasn’t Invested Much Into Sarkisian

John Talty of AL.com reports that Sarkisian is currently the lowest paid member of Saban’s staff, making only $35,000 a year without a contract. Sarkisian’s history is likely a serious factor in the low pay and non-committal status of the Tide toward him. His promotion to offensive coordinator, however, means that the university has a good amount of trust in him.

Whether or not Sarkisian will get any bonus with his new duties is a matter of speculation. It’s likely that Sarkisian will soon receive a more traditional contract typical of an offensive coordinator for a program like Alabama.

4. Sarkisian Went Through a Divorce Recently

Shortly before Sarkisian was fired from USC, his personal life off-the-field went through a tumultuous time that included the end of his marriage.

On April 20, 2015, Sarkisian’s ex-wife Stephanie filed for divorce to end their 18-year marriage, according to TMZ Sports.

The couple have three children together; a son, Brady and two daughters, Ashley and Taylor. Sarkisian has not been romantically linked to anyone publicly since the divorce.

5. Sarkisian Worked as the Announcer for His Son’s First Tackle Football Game

Brady Sarkisian played his first tackle football game in September of 2013, and had the privilege of hearing a familiar voice over the PA for that event.

Steve was the announcer for the game played by Brady’s team, the Junior Wolverines of Bellevue, Washington. Adam Jude of the Seattle Times reported that Sarkisian said that he was “fired up” for the opportunity and wanted all the information that he could gather for every player on the team for the event.

If Sarkisian can keep his focus on his children and new job with the Tide, it’s likely that he can build on the success that he started building in his tenure with Washington and USC. 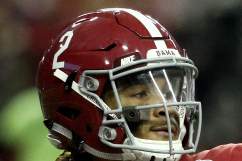