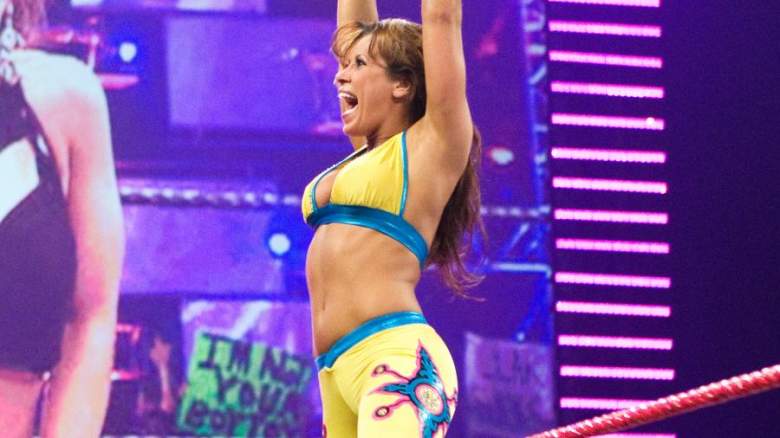 Mickie James made her return to ‘SmackDown Live’ on January 17th. (WWE.com)

Mickie James made a surprise return to SmackDown Live last week, revealing herself to be Alexa Bliss’ secret guardian, La Luchadora. We didn’t get to hear from her at all, but on tonight’s SmackDown, Renee Young will interview Mickie James in the ring and find out why she has returned.

James, who is 5’5″ and 135 pounds, has been working in wrestling since the late 1990s, and she is considered to be one of the WWE’s greatest female performers of all time. Her appearance on last week’s SmackDown marked her return to the show after a seven year absence, although she came back to the WWE last year with a major role on NXT.

For those viewers who need a refresher on Mickie James and what she has been up to lately, here’s what you need to know about her.

1. She Began Her Career With Ring of Honor & Total Nonstop Action

Mickie James started her career in wrestling not with World Wrestling Entertainment, but with the WWE’s competitors, Ring of Honor and Total Nonstop Action.

After a few years of wrestling on the independent circuit, James made her debut on Ring of Honor in 2002. That same year, she also started working for Total Nonstop Action Wrestling, performing as Alexis Laree. It took until March of 2003 for James to have a larger role; she teamed up with Amazing Red.

In an interview with Slam Wrestling, James said that she had a hard time making ends meet and that she worked as a waiter in her free time.

“The easiest job to keep when you are wrestling is a waiting job, or something like that,” she said. “I waited tables at Olive Garden, and a few different places. They’re the only ones that can work with your schedule, and even they get annoyed with your schedule sometimes.”

James left TNA in 2003 when she was signed to World Wrestling Entertainment.

World Wrestling Entertainment signed Mickie James in 2003. For two years, she wrestled at their Ohio Valley Wrestling promotion, but she finally made her debut on Monday Night Raw on October 10th, 2005.

During her first Raw episode, Mickie James, who was now using her real name, played a hardcore fan of Trish Stratus, the WWE Women’s Champion. The two of them competed in a tag team for a bit, and the storyline involved James becoming increasingly obsessed with Stratus. They kissed under the mistletoe during a Christmas episode, and a few months later, James confessed her love for Stratus. Stratus was not into any of this, and when Stratus finally rejected James, that caused James to turn heel. This all lead up to a match between the two at WrestleMania 22, and James was able to defeat Stratus and become Women’s Champion for the first time. That James/Stratus feud came to an end with James retaining her championship in a rematch, but she would later lose the belt to Lita.

Mickie James and Lita then feuded for a bit, with James becoming a face again and with James beating Lita at Survivor Series; this was Lita’s final match prior to her retirement.

Next, James feuded with Melina, losing the title to her and then failing to win it back during a Falls Count Anywhere match. Two months later, James won the title back from Melania, only to immediately lose it again. The following year, James defeated Beth Phoenix to win the title for the fourth time; James teamed up with Kofi Kingston against Beth Phoenix and Marella, but at SummerSlam, James lost her title.

After WrestleMania 25 in 2009, Mickie James feuded with Maryse, eventually defeating her to become Divas Champion for the first time. She held this title for a few months before losing it to Jillian Hall, and James was subsequently traded from Raw to SmackDown.

Not long after James made her SmackDown debut, she became involved in an incredibly bizarre storyline in which she is ruthlessly mocked and bullied by Michelle McCool and Layla, who repeatedly call her “Piggy James.” James faced McCool for the title a few months later but lost due to the interference of Layla. At Royal Rumble in 2010, James defeated McCool in just 20 seconds to win the title, but McCool won it back in her rematch.

Mickie James’ final WWE storyline saw her teaming up with Kelly Kelly, Eve Torres, Beth Phoenix, and Gail Kim against Michelle McCool, Maryse, Layla, Vickie Guerrero and Alicia Fox. James’ team was victorious during her last appearance on Raw, but on her final SmackDown show, James was defeated by Beth Phoenix and Layla. This was the last time James was seen on SmackDown until last week.

After leaving the WWE, James wrestled in the independent circuit and then returned to TNA. In November 2016, she came back to the WWE to face Asuka at NXT TakeOver: Toronto, but Asuka defeated her and retained the title.

3. She Used to Date John Cena

Coming back to SmackDown Live must be at least a little awkward for Mickie James, and she’ll be working alongside her ex-fiance, Kenny Dykstra, her ex-boyfriend, John Cena, and Cena’s new girlfriend, Nikki Bella.

Mickie James was once engaged to fellow wrestler Kenny Dykstra, and Dykstra says that the two of them broke up because he discovered Mickie was cheating on him with John Cena. Cena and James hooked up for a while before Cena ended the relationship, and James being upset about this breakup is reportedly why she was transferred from Raw to SmackDown in 2009, according to Wrestling Inc.

This all came to light because Kenny Dykstra made the information public.

“She wanted to date [John Cena], he said no, she flipped out backstage which led to her demise,” he said. “…When they were together she got the title, TV roles. When he dumped her she became Piggy James, then fired.”

Mickie James recently said it was unfortunate that Kenny Dykstra had made all this drama public and said that some of it wasn’t true.

“As far as that whole thing with Ken it was a shame that he went out and said the things that he did and did that, because I feel that a lot of it was a lie and it was mostly just kind of to help his book sales or whatever the case may be,” she said. “But you know, it is what it is and you know, I’m a grown up.”

James also said that she does not think it will be awkward to be working around John Cena, Nikki Bella and Kenny Dykstra, saying that they’re all adults and that they have moved on.

Outside of her wrestling career, Mickie James performs as a country music artist. She released her first album, Strangers & Angels, in May 2010. Later that year, she released a single called “Hardcore Country,” which made use of her Total Nonstop Action entrance theme.

The first album was independently released, and for her second album, James decided to raise funds on Kickstarter. She set the goal at $5,000 but ended up with over $16,000. The album, Somebody’s Gonna Pay, was released in 2013. One of the music videos for this album actually features an appearance by Trish Stratus, the WWE superstar who James had her first major storyline with.

A few weeks after her match against Asuka at NXT TakeOver: Toronto, James released a new single, “Shooting Blanks.”

5. She Is Married to Magnus

Happy 1st year Baby!!! I love you more today than yesterday… and a little less than tomorrow! This year has flown by already and we've only just begun! I can't wait to see what the rest of them all have in store for us… cheers to you and me baby! Happy anniversary! Happiest 2016!!! Xoxo

Years after all the drama with John Cena, Mickie James fell in love with fellow pro-wrestler Nick Aldis, who wrestles under the name Magnus. He is a former TNA superstar, and he is now signed with Global Force Wrestling.

In 2016, James reflected on the experience of becoming pregnant while working as a professional wrestler.

“At a point you accept it and embrace it,” she said. “It is kind of scary because you’re watching your body transform. And the whole time your thinking, ‘am I going to be able to get it back to where it was?’ Especially because our business is so cosmetic as it is. Especially females. It’s all about looks.”