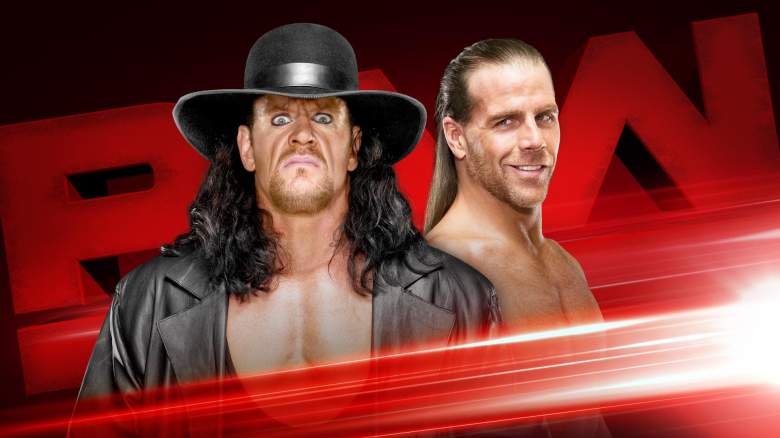 The Undertaker and Shawn Michaels will both return on tonight’s episode of ‘Monday Night Raw.’ (WWE.com)

10:34 – The New Day enters, followed shortly by Titus O’Neil. He apologizes for attacking Xavier Woods last week, saying he wants another chance to join The New Day. The group plays a clip of O’Neil repeatedly falling on his face during a keg race on NXT. They laugh hysterically at him and then unveil a keg outside of the ring, giving him a chance to redeem himself. O’Neil runs around the ring with the keg, but he drops it right before crossing the finish line.

Kofi Kingston then says that he will fight Titus O’Neil in a match up next.

10:28 – Alicia Fox approaches Noam Dar backstage. He expects to be slapped, but instead, out of absolutely nowhere, Fox gives him a kiss and walks away.

10:12 – Backstage, Kevin Owens mocks the idea that The Undertaker’s return is particularly exciting. He also says that Roman Reigns will suffer the consequences of Goldberg’s actions last week when he and Chris Jericho take the United States Championship. Jericho says that two Canadians will now become the face of America.

9:54 – A very sad Mick Foley stands in the ring and begs The Undertaker to show up. Suddenly, the lights go out…and Stephanie McMahon enters. She apologizes to the audience for Mick Foley’s inability to produce The Undertaker. McMahon says she will now give Foley his performance review publicly. The crowd is unhappy right now because of Foley’s failure, McMahon says, and over the past few months, Foley has taken two steps back for every step forward. It’s because of him that SmackDown Live recently beat Raw in the ratings, she concludes, and she asks Foley what he has to say for himself.

Just as Foley is about to start apologizing, The Undertaker enters. He immediately announces that he will be entering the Royal Rumble. He goes on to say that he answers to no one and goes where he wants when he wants. This is the city where his streak came to an end, Undertaker says, but his journey continues to the Royal Rumble. After he wins, he will return to the main event at WrestleMania; if anyone stands in his way, they will rest in peace.

9:53 – Backstage, Roman Reigns is asked if he feels prepared for his handicap match tonight. Roman says it doesn’t matter because it’s his duty to defend the title. He adds that every time he faces Chris Jericho and Kevin Owens in the ring, he annihilates them, and tonight won’t be any different.

9:36 – Sheamus defeats Luke Gallows. Karl Anderson and Cesaro sit in on commentary, and they soon begin brawling. Gallows is distracted by this, and the distraction allows Sheamus to score the victory.

9:33 – Sasha and Bayley enter Stephanie McMahon’s office. They say that they want to fight Charlotte and Nia Jax next week. McMahon is extremely hostile, telling Sasha to watch her tone and saying that the only boss in this room is her. McMahon says that the two of them can have their match against Nia Jax and Charlotte, except it won’t be next week; it will be tonight.

9:21 – Neville defeats Lince Dorado by submission. After the match, Neville continues to attack Lince Dorado even though he has already run. Rich Swann then runs out and starts attacking Neville, and Neville retreats.

9:12 – Big Cass defeats Jinder Mahal. Shawn Michaels watches the match at ringside, and towards the end of the match he attacks Rusev and prevents him from interfering.

8:53 – Shawn Michaels enters. He tells the audience that he’s missed them and he has missed the WWE, especially at this time of year ahead of the Royal Rumble. This year, it happens to be taking place in his hometown of San Antonio, Texas.

Michaels reflects back on winning at Royal Rumble in San Antonio 20 years ago. This year will be one to remember, as the card is absolutely stacked. The entire crowd chants, “One more match!” Michaels says that no, he’s just here to talk about his new movie, guys.

As Michaels is plugging his movie, Rusev, Lana and Jinder Mahal enter. Rusev says that Michaels’ new movie will only be successful if he puts Lana in it. Michaels points out that it’s a little late for that because the movie is already completed. Rusev really isn’t dropping this, and he suggests that Michaels CGI Lana into the movie like how Disney put Peter Cushing in Rogue One: A Star Wars Story. They continue talking about this for several bizarre minutes; the crowd is absolutely dead.

Enzo Amore and Big Cass enter. Amore is still in a wheelchair, although he gets out of it and starts walking around as soon as he gets to the ring. Amore says that tonight Shawn Michaels is actually the realest guy in the room. He proceeds to talk smack about Rusev and Lana, and Big Cass offers up a bunch of movie titles that describe Lana and Rusev, including Beauty and the Beast and Puss in Boots. Shawn Michaels throw in his own: Dumb and Dumber.

This leads up to Big Cass telling Rusev that they should finish this once and for all with a match right now. Rusev agrees that Big Cass will have a match…against Jinder Mahal.

8:51 – Mick Foley walks around backstage asking if anyone has seen The Undertaker. Stephanie McMahon asks Foley if he’s had any luck finding him, which he has not. But Foley says he has an innate feeling that The Undertaker will be here. McMahon says she can’t just rely on Foley’s feelings, and she says that her entire performance review relies on Foley’s ability to ensure The Undertaker gets here tonight.

8:34 – Bayley and Sasha Banks talk backstage. Sasha congratulates Bayley on becoming the number one contender, saying she believes in her to defeat Charlotte. She also tells Bayley that she has her back if Charlotte tries to pull any tricks, such as involving Dana Brooke in the match.

Charlotte walks in and starts sarcastically clapping. She points out that Bayley has never defeated her for her title at a pay-per-view, nor has anyone. She also mocks Sasha for pretending to care about Bayley.

Nia Jax enters, repeatedly kicking Sasha in her injured knee. At the same time, Charlotte starts beating up Bayley. With those two taken care of, Charlotte laughs and pats Nia Jax on the back, but Nia isn’t having it; she pushes Charlotte away and leaves.

8:14 – A match between Seth Rollins and Braun Strowman ends in a double countout. After the match, Strowman grabs a chair and is ready to go after Rollins some more, but Rollins is able to fight back, grabbing the chair from Braun and forcing him to retreat backstage.

Seth Rollins enters, coming to Roman Reigns’ aid and fighting Strowman, Jericho and Owens, hitting them all with a steel chair. While Rollins is fighting, Reigns gets back up, and he and Rollins both team up to take down Strowman.

Stephanie McMahon enters. She’s annoyed that the opening of the show has devolved in this way, and she decides to push the handicap match until later in the night. Next up, though, Seth Rollins will fight Braun Strowman.

8:00 – In her office, Stephanie McMahon sits down with Mick Foley to give him a performance review. First, though, she wants to address the rumor that The Undertaker is going to return tonight. (You know, the “rumor” that was flat out announced on last week’s show.) McMahon has no clue whether The Undertaker is coming because last she saw him, he was on SmackDown Live. Foley says he has no evidence that The Undertaker will show up, but he has a strong feeling that he will.

Seth Rollins enters. He tells McMahon that he’s entering into the Royal Rumble match. Then Braun Strowman bursts in, demanding a fight with Roman Reigns or Goldberg. Foley says that Goldberg isn’t even in the city, let alone in this building. Seth Rollins says he thinks he can help Braun, and he starts assaulting Strowman. The two begin to brawl, and the fight has to be broken up by security.