After the Yellow Tail wine commercial airs tonight, many will be left with one question. Who is that model who walks on the beach in the white bikini, saying, “Sure, I’ll pet your roo?”

We sat down with Ellie Gonsalves this week in New York City to answer that question. The three-time Maxim Australia cover model was chosen by the wine brand to represent her native country in the ad that some are calling the sexiest Super Bowl commercial this year.

“I don’t even know what to expect. I really don’t,” she said of her impending fame. “But, I mean, they do say my name on the commercial, so I think people are probably gonna jump on Google and find me through there.”

We talked to her about filming the commercial, her plans for game day, and what her family and friends back home think about her Super Bowl debut.

Here’s what you should know about the 26-year-old Aussie who is now making a name for herself nationwide.

1. She Started Modeling at 13 in Her Native Australia

“I was a bit of a ratbag tomboy kid, so my parents enrolled me in a deportment course, a modeling school, and then they actually wanted to put me on the books,” she explained about her early days in the industry.

The Australian label Yellow Tail, which is the first wine company to advertise during the Super Bowl in 40 years, hand-picked Gonsalves to star in the ad.

“They were looking for an Australian to represent it, and they found me. And I feel extremely honored that they picked me to represent them in a Super Bowl commercial,” she said.

It was shot in Barcelona and she was there for three days filming, even getting a chance to explore the city as a tourist. “Working with the whole team at Yellow Tail was so fun. It was a blast. We were on the beach; we had this kangaroo. It was really quite an unbelievable experience,” she said of making the commercial.

Although she follows a disciplined workout regime, she does indulge in wine, calling it her “little treat.” “I’m definitely a wine drinker. I love their Sauvignon Blanc and also their Moscato. I’m a sweetish white wine kind of girl,” she said.

When asked if she will now receive Yellow Tail for life, she laughed and said, “You’ll have to ask them!”

Gonsalves actively shares pictures on her Instagram account of everything from her dog to her Guess lingerie campaign.

After today, she is more than likely to attract even more fans on social media. “I’m definitely welcome to new people following my journey, so I’m really excited,” she said.

And her journey is just beginning. This year, she will enjoy another professional milestone with the launch of her on-screen career. Although she can’t divulge much just yet, she did assure us that its announcement will come shortly after the Super Bowl.

She did give us this teaser though:

I cannot really say too much, other than it’s being written and directed by somebody I have watched all of their work for years and I feel so excited to be able to work with them. And the person producing it as well is absolutely amazing. They’re one of my childhood heroes, super humble, just the hardest worker in the room.

One last swim today before I face Australian winter weather for a week. ☁️✈️❄️

Gonsalves left Australia for LA a little over two years ago and describes her initial experience as a “culture shock.” “I live in LA, so it was quite a difference, but in terms of the weather and being near the beach, it’s very similar to where I’m from in Brisbane, Australia.”

“I love it out here; it’s very, very fun,” she said of her new West Coast life.

The outpouring of love from her friends in Australia has touched her heart and she expressed her gratitude for their overwhelming support. “Everyone back home are like so proud. All of my friends, they’ve all been posting on their Facebook accounts all of the new stuff and tagging me in it, which is so sweet. I have the best friends in the world. It’s really unbelievable.”

4. Her Birthday Is on Super Bowl Sunday

I'm ready for the SuperBowl tomorrow… are you ready? Tune in first half to catch my BigGame Yellow Tail commercial ?? I'm going to be celebrating my birthday while watching, who are you rooting for and why?! ? Videographer: @sarahorbanicphotos

Gonsalves is spending her 26th birthday, which happens to be today, watching the game with friends in Las Vegas.

“I was invited to go to the game, but I wanted to spend it with my friends here. And they live in Vegas, so they’re gonna do a big Super Bowl birthday party thing for me in Vegas, which is really exciting. And we’ll be watching the game from there.”

The birthday girl is already getting showered with well wishes on Twitter. Fellow Aussie Bindi Irwin gave a shout-out to Gonsalves, who works as global ambassador for the Australian Zoo Wildlife Warriors, a wildlife conservation organization that Irwin’s parents, Steve and Terri founded.

Hope your birthday was beautiful @EllieGonsalves ❤️ You are an inspiration. Thank you for being such a light in the world. Love & hugs x pic.twitter.com/Q6x3eEPna6

An apparent animal lover, Gonsalves did the photo shoot below at the Australia Zoo:

5. She’s Never Been to a Sporting Event in the U.S.

Super bowl 2017 just 12 days away!! Patriots VS. Falcons.. I'm a Patriots girl — who are you guys rooting for? ?? Can't wait for you guys to see the YellowTailSuperBowlCommercial

Now that LA brought back their football program, we asked Gonsalves if she’s ever attended a game. “I actually haven’t been to a sporting game since I’ve been here,” she said, adding, “I’d love to go to a Lakers game or something in LA, but haven’t, unfortunately, been to a game yet.”

As far as what team she is rooting for tonight, she’s been quite vocal about where her loyalties lie, as you can see in the Instagram post above. She confirmed that sentiment with us, gushing:

I’m a Patriots girl. I think that they’re a great team…they have great coaches. It’s just a great community of fans as well. I love how Americans really get into their teams over here and the spirit during the game is just like nothing I’ve ever seen before, not in Australia, nowhere. So, yeah, that’s kind of what makes me a Pats’ girl. And Gisele, of course. 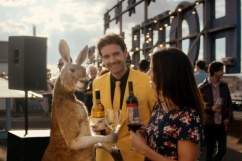