John Malkovich showed off his new fashion collection in a Super Bowl ad for Squarespace that aired during the big game tonight.

While many people recognize John Malkovich for his starring role in the 1999 film Being John Malkovich, most people are unaware that the Oscar nominated actor got his start as a costume designer. Malkovich is ready to make that fact known with the release of his website, http://www.JohnMalkovich.com, which you can visit here. The ‘About Me’ section of his fashion site reads:

Acclaimed actor John Malkovich has a new stage: fashion design. Now, with his own label, John takes inspiration from his travels and experiences, fine art, and storytelling elements, such as setting and characterization. He sketches designs and patterns, refining every detail, while travelling and during downtime on set. For over 30 years, John has been a passionate fabric collector. With a meditative approach, he often spends several days focusing purely on fabric selection. 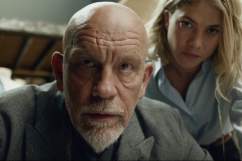 Squarespace’s Super Bowl commercial serves two purposes: to highlight Malkovich’s new clothing line, and to emphasize Squarespace’s role in making his fashion dreams come true. David Lee, Squarespace’s chief creative officer, recently told AdWeek, “John’s story is of change, transformation and reinvention. It’s a gentle reminder that you don’t have to settle with the hand you’ve been dealt. These are the sorts of multifaceted individuals we love to highlight and partner with.”

Malkovich’s first fashion company, Mrs. Mudd, was launched in 2002. His second, Technobohemian, was released in 2010, and many of the designs were Malkovich’s own. In the short film you can see above, the actor says, “I’m always a figure in someone else’s dream. I’d really rather sometimes make my own figures and make my own dreams.” The short film is shot much like a movie trailer, and shows Malkovich working on his sketches as he forays into the world of fashion. 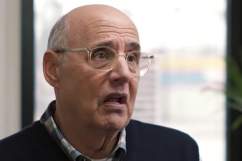 Read More
John Malkovich, Squarespace, Super Bowl Commercials
John Malkovich is making his next move as a fashion designer. Here's what you need to know about his clothing line, featured on his new website, www.JohnMalkovich.com.