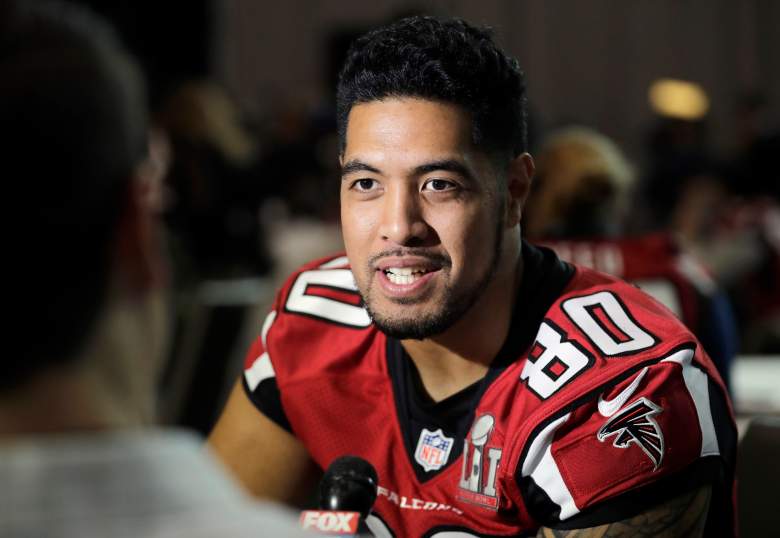 Levine Toilolo of the Atlanta Falcons speaks with the media during the Super Bowl LI press conference on February 2, 2017 in Houston, Texas. (Getty)

Levine Toilolo, 25-year-old tight end for the Atlanta Falcons, is getting ready for the biggest game of his life.

Toilolo is from San Diego, California, and he has been playing with the Atlanta Falcons since 2013. He towers over most other players on the field at 6’8″, and he weighs in at 265 pounds.

Here’s everything you need to know about Levine Toilolo, Atlanta Falcons tight end, ahead of Super Bowl LI.

1. He Played for Helix High School in La Mesa, California 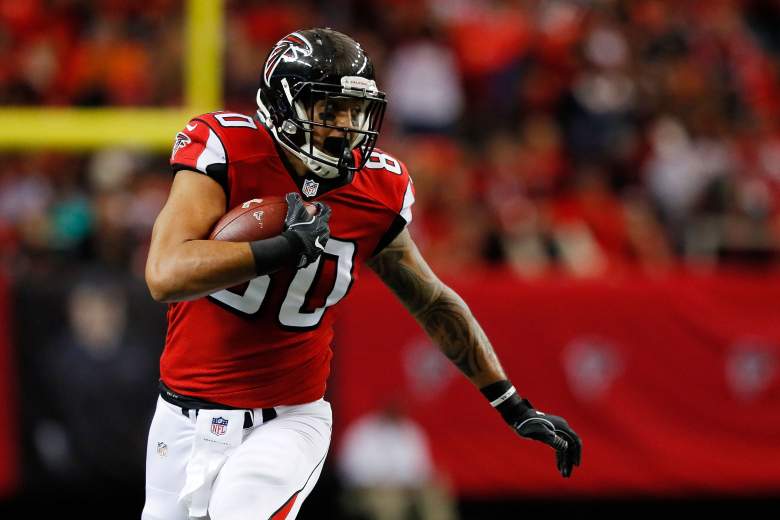 Levine Toilolo of the Atlanta Falcons runs after a catch during the second half against the Arizona Cardinals at the Georgia Dome on November 27, 2016 in Atlanta, Georgia. (Getty)

Levine Toilolo was born in San Diego, California in 1991, and he attended Helix High School, a charter school located in La Mesa. Helix is the alma mater of several other NFL stars including Karl Dorrell, former wide receiver for the Dallas Cowboys; Marc Raab, former offensive lineman for the Washington Redskins and the San Diego Chargers; Bruce Walton, former offensive lineman for the Dallas Cowboys; Evan Arapostathis, former punter for the St. Louis Cardinals; Chuck Cecil, defensive secondary coach of the Los Angeles Rams; and Reggie Bush, running back for the Buffalo Bills.

According to Max Preps, across 18 games played during his junior and senior years at Helix, Toilolo finished with 18 receptions, 416 receiving yards and an average of 13.9 yards per catch.

After graduating from Helix High School, Toilolo was recruited by Stanford University.

2. He Finished at Stanford With 50 Receptions 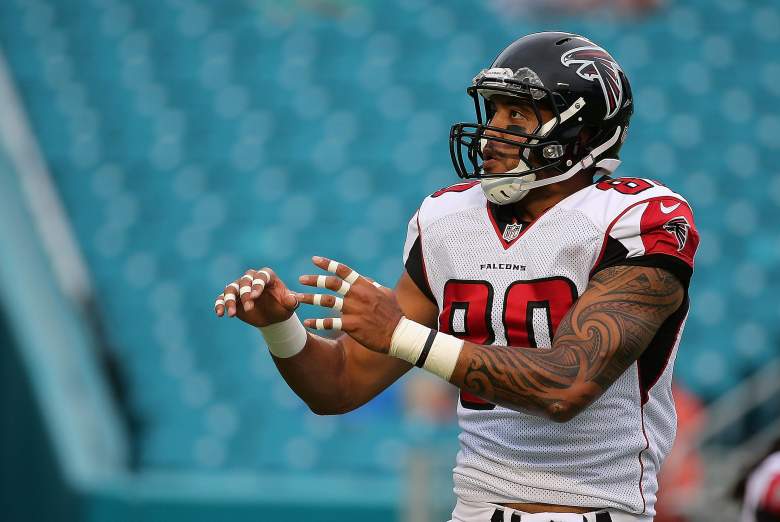 Levine Toilolo of the Atlanta Falcons during a preseason game against the Miami Dolphins at Sun Life Stadium on August 29, 2015 in Miami Gardens, Florida. (Getty)

He finished his career with Stanford with 50 receptions for 763 yards and 10 touchdowns. He was part of a three-man tight end team along with Zach Ertz and Coby Fleener, according to SBNation.

As his NFL profile notes, Toilolo had a rocky start with Stanford. He didn’t see action in 2009, and then in 2010, he was injured during the very first game of the season. This sidelined him for the entire season. But it was in 2011 that Toilolo started to make a name for himself, catching 25 passes for 343 yards and six touchdowns. The following year, he caught 24 passes for 393 yards and four touchdowns. His touchdown receptions ranked second on the Stanford Cardinals, behind Coby Fleener’s 10, according to Go Stanford. 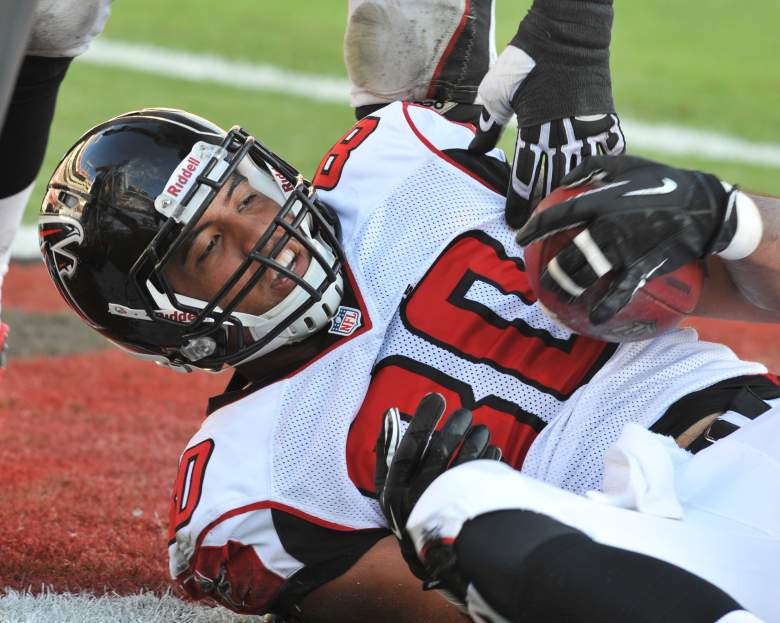 Tight end Levine Toilolo of the Atlanta Falcons recovers a fumble in the end zone against the Tampa Bay Buccaneers November 17, 2013. (Getty)

Toilolo was listed as the number three tight-end on the Falcons’ team depth chart, behind Jacob Tamme and Austin Hooper, according to CBS Sports. CBS Sports recently noted that Toilolo “entered 2016 with an opportunity to win the starting job, but after a mediocre preseason, that ship has long sailed.”

Atlanta Falcons fan site The Falcoholic wrote of Toilolo in 2016, “with three years of professional football under his belt, you’d think Toilolo would’ve turned the corner if he’s going to turn it at all,” but going on to say that he is still a valuable asset on the team.

“He’s an above-average blocker with untapped potential as a red zone threat,” James Rael wrote on The Falcoholic. “To be frank, his technique and size-related awkwardness have hindered his ability to contribute in the passing game. But I’m simply unwilling to accept the premise that he’s peaked.”

4. He Is the Tallest Player on the Atlanta Falcons 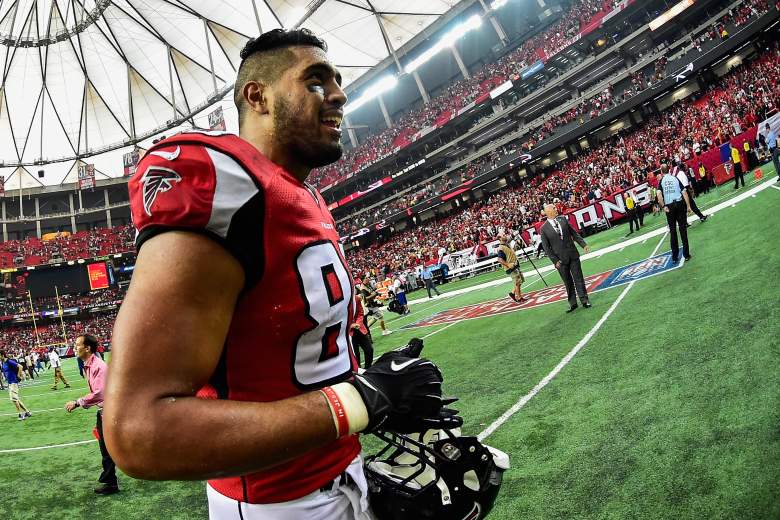 Levine Toilolo of the Atlanta Falcons walks off the field after beating the New Orleans Saints in overtimen at the Georgia Dome on September 7, 2014 in Atlanta, Georgia. (Getty)

At 6’8″, Levine Toilolo is the tallest player on the Atlanta Falcons.

In describing Levine Toilolo, the website The Falcoholic wrote somewhat derisively, “Levine Toilolo has been an intriguing player for a while now for one, simple reason: He is very tall.” In a separate article, they said that his height is a valuable asset, writing, “At 6’8, he’s a monster on the football field. (Heck, he’s so big, the Falcons once used him as a right tackle in a pinch.)”

Toilolo’s height made for a particularly striking image when he was recently interviewed by Olympic gymnast Simone Biles, who is 4’9″.

Toilolo isn’t the tallest player in all of the NFL, though. Above him are King Dunlap of the Los Angeles Chargers and Demar Dotson of the Tampa Bay Buccaneers, who are both 6’9″. And the tallest NFL player in history? That title goes to the late Richard Sligh, who played for the Oakland Raiders and who stood seven foot tall.

5. He Has Three Uncles Who Played With the NFL 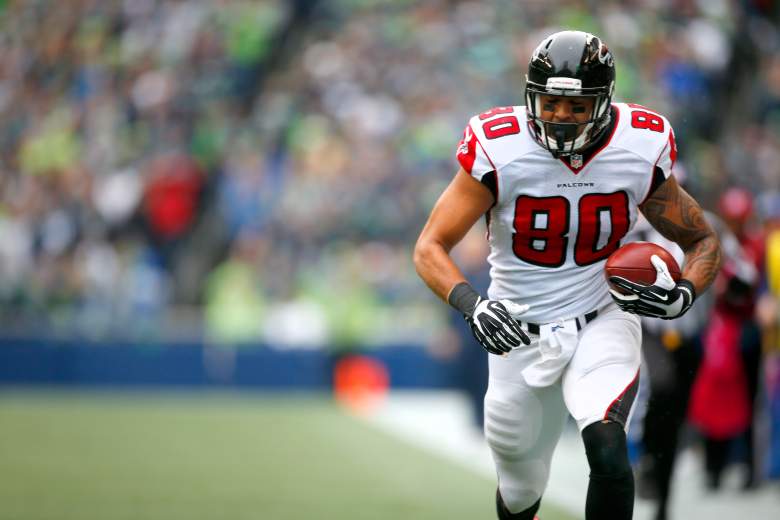 Levine Toilolo of the Atlanta Falcons heads toward endzone for a touchdown against the Seattle Seahawks at CenturyLink Field on October 16, 2016 in Seattle, Washington. (Getty)

Levine Toilolo comes from an athletic family, with three of his uncles having played for the NFL.

Read More
Atlanta Falcons, Football, NFL, Superbowl
Levine Toilolo, tight end for the Atlanta Falcons, is the tallest player on the team, towering over his opponents at 6'8".