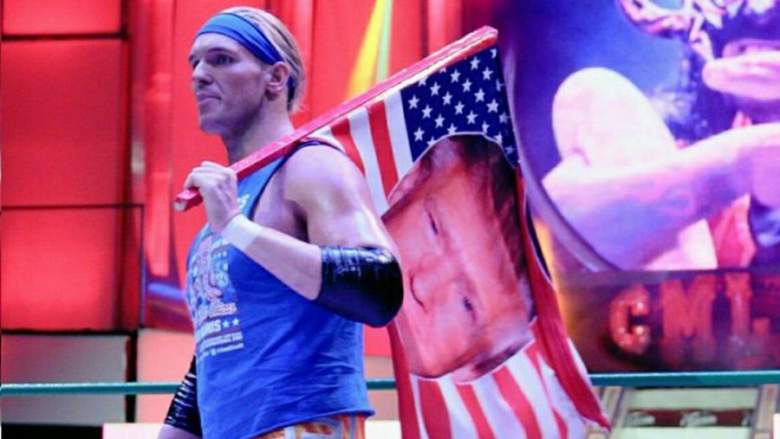 Sam Adonis, who was previously known as Sam Elias and was born Sam Polinsky, is the brother of WWE commentator Corey Graves. He’s also making a name for himself in Mexico by wresting as a Donald Trump-supporting villain for Mexican promoter CMLL.

When he enters the ring for lucha libre fans, he carries an American flag with Trump’s face on it. This is how the 27-year-old gets the crowd excited.

Here’s a look at Polinsky and his career in Mexico.

1. Polinsky Isn’t a Trump Supporter, But He Does Admire His Showmanship

Polinsky isn’t doing this because he hates Trump or wants to make fun of his supporters. He just figured out that playing a Trump supporter in the ring in Mexico could make him a star there.

“I had a perfect idea: Why not come to the arena with [an American] flag, but I’m gonna take this to a whole other level,” Polinsky told NPR. “I have a 4-ft. flag with the face of Donald Trump on it.”

The Pittsburgh-native said that he isn’t a Trump supporter in real life. “I can’t say I support him, but I definitely supported him more than Hillary Clinton,” he told NPR. “But I’m thankful he’s in the position he’s in, because it’s putting more money in my pocket.”

He told NPR that he admires Trump’s showmanship, referencing Trump’s several appearances at WWE shows during the early 2000s. “You have Trump the persona and Trump the actual person.”

2. Fans Scream the ‘Worst Expletives They Can at Me’

“I hear it all, and the Mexican fans are screaming the worst expletives they can at me. They are throwing beers at me, they are throwing popcorn at me,” Polinsky told Reuters.

That’s the part he really loves about Mexican wrestling fans. “Fans in Mexican lucha libre are some of the best on earth. Two thousand people in Mexico can make more noise than 20,000 people in the United States,” he told Reuters. Even though they hate his character, kids will still ask for his autograph.

Polinsky has only been in Mexico since April 2015, just as Trump was winning Republican primaries. At that point, he realized that he could play a Trump-supporter as a villain.

In an interview with Vice, he described how his first day as the Trump supporter character went:

The first day I went out there [with the flag] was the Saturday after the election. I can’t even explain how angry the people were. At first you come out and they see an American flag with a big orange spot on it, and then once it registers who it is and what’s going on, they forget that they’re at a wrestling show. They’ve fully embraced it: “screw this guy.” That genuine emotion and passion is what I thrive off of. They forget what they know, they want to just let me have everything they can.

3. Before Mexico, Polinsky Wrestled in Liverpool With the Help of William Regal

Indy Mayhem Show 146: Sam AdonisSam Adonis joins us to talk about coming up in Pittsburgh (including how his father helped him in his career (Check out our interview with Dan Polinsky!) how he got to CMLL in Mexico, being a "good looking" heel in the country, his Donald Trump American Flag and more! Share your feelings on indy wrestling…2017-02-02T19:30:00.000Z

Polinsky did try his hand at wrestling in the U.S., but it didn’t work out at first. TribLive.com notes that he signed to the Florida Championship Wresting in 2011 when he was 21 years old. He left later that year after not finding success.

However, he became friends with former WWE wrestler William Regal, who got him a job at All Star Wrestling in Liverpool, England.

“It’s a hidden gem,” Polinsky told TribLive. “It’s far and away the No. 1 promotion in Europe by volume of shows and money generated, but because they don’t do Twitter or Facebook and YouTube, it’s almost like we didn’t exist.”

When he moved to Mexico in 2016, his first nicknames were El Rubio Fantastico (The Fantastic Blond) and El Rudo De La Chicas (The Villain For the Women).

4. Polinsky Wanted to Make a Name For Himself Without His Brother’s Help

Mexico: Mexican-based American wrestler wins over fans' hearts despite being pro-TrumpMexico-based American wrestler Sam Polinsky, better known with the ring-pseudonym of Sam Adonis, said that he "had a lot of success in the Mexican wrestling industry" even though he fully supports US President Donald Trump, talking ahead of his wrestling show in Mexico City, Sunday. "I have a ton of respect for Donald Trump because…2017-02-13T10:52:34.000Z

In his TribLive.com interview, Polinsky said that has always been a goal of his to break into wrestling without his older brother’s help.

“It’s probably why I’m not as well known as I could be,” Polinsky told the site. “I’m quite stubborn about that.”

5. He Says He’s ‘Always Wanted to be a Baby Face’ & Loved Hulk Hogan Growing Up

In a profile for Vice, Polinsky said that his goal as a kid was to be a “baby face” and wasn’t interested in playing a villain.

“I love Hulk Hogan and I’d love to be the number-one baby face that girls like, the men want to hang out with, and the kids look up to—that’s what I’ve always wanted to be,” Polinsky told Vice. “But as of right now, I know I can give the audience a better form of entertainment as a heel.”

Polinsky also said that he is not a racist.

“I have a Mexican girlfriend—I never want that image to get out there,” he told Vice. “I’m just such a purist for professional wrestling done right. I know I can send people home happy and I can give them the best performance by pushing every button that I can.”

Read More
Donald Trump, Politics, Wrestling
Sam Adonis, the brother of WWE commentator Corey Graves, has made a name for himself as a Donald Trump-supporting villain in Mexico.