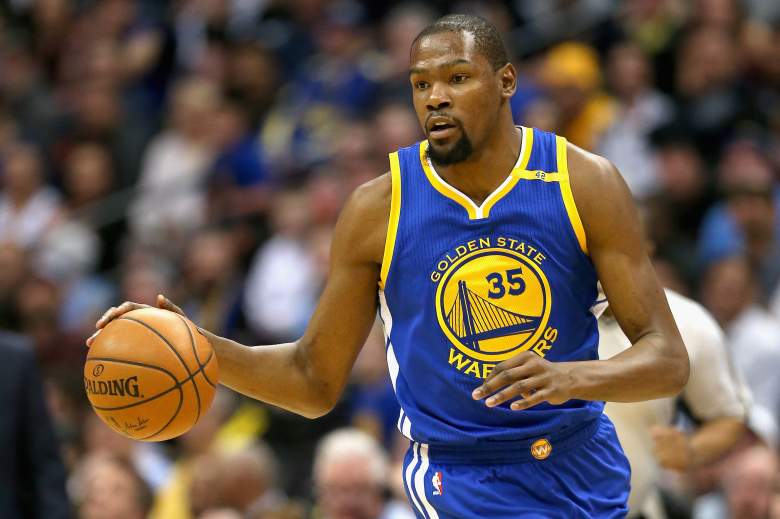 Kevin Durant will not play tonight against the Oklahoma City Thunder. (Getty)

Last time the Golden State Warriors came to Oklahoma City, it was an epic showdown as Kevin Durant returned to play his former team. In the March 20 re-match, Durant will not play tonight. Durant is sitting on the Warriors bench in street clothes. Durant traveled with the team and was seen during the morning shoot around riding a stationary bike.

Kevin Durant riding the bike post shootaround in OKC. Steve Kerr said he's not sure whether KD will sit on bench tonight. pic.twitter.com/gOSAbA8mwV

Warriors coach Steve Kerr told The Mercury News the decision was up to Durant, and he was unsure whether Durant would be on the bench.

I don’t know [if he’ll sit on the bench]. I haven’t asked him. It’s up to him. The last few games, he hasn’t been out on our bench at Oracle. He’s been getting treatment from the training staff. It’s not really a concern of mine, so I haven’t asked him. Sometimes if a guy’s hurt, we don’t want him on the bench. A guy can fly into him on a loose ball, if he’s not able to move out of the way. But I don’t think that’s a factor here. It’ll be up to him.

According to the San Francisco Chronicle, it is the first time Durant has traveled with the team since sustaining a grade 2 MCL sprain and tibial bone bruise on February 28. While the team has not set a return date, there is hope Durant will be ready to return by the end of the regular season.

Although the Warriors have been just 5-5 in Durant’s absence, the team is not rushing him back. “You just try to let a guy rehab and do what he wants to do at his own pace. I feel like when you start talking to a guy — ‘Hey, man, how you doing?’ — then all of a sudden they want to rush back. … Take your time. Get right. When he’s ready, obviously, we want him back out there,” Draymond Green told the San Francisco Chronicle.

The Mercury News notes Durant will be re-evaluated in a week. Here is the original statement the Warriors issued on March 1:

Durant was greeted with boos and different variations of cupcake jokes in his initial return to OKC. The term was an inside joke on the Thunder team that referred to a player that was soft. If Durant does decide to sit on the bench, he will no doubt receive similar treatment from his former fans.

The Warriors final regular season game is April 12 against the Lakers. Durant would need to be ready by April 15 in order to play when the playoffs start. 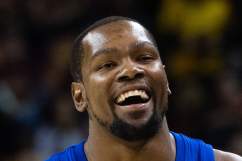