It has been a tumultuous few years for Aaron Hernandez’s family who have been dragged into the spotlight throughout Hernandez’s two murder trials. The family received more bad news on April 19, 2017 when news broke Aaron had committed suicide in prison.

According to TMZ, Aaron’s lawyer, Jose Baez, has announced the family would like a full investigation into whether Aaron was murdered inside of prison.

The family has not commented publicly since Aaron’s death. Instead, there is a sign on the door of their Connecticut home that reads “no comment”.

Sign at family home of #Aaron_Hernandez says family has no comment. Others in #Bristol who knew him are shocked about suicide. pic.twitter.com/76GUTWnceH

Aaron leaves behind his fiancee, Shayanna Jenkins and daughter Avielle Jenkins-Hernandez; mother Terri Hernandez and brother, Jonathan Hernandez. Aaron and his family are from Bristol, Connecticut.

Read more about the Hernandez family.

1. Aaron’s Brother, Jonathan, Was a Graduate Assistant For Iowa’s Football Team But No School Would Hire Him After His Brother’s Trial

Aaron’s multiple murder trials not only impacted him but also those closest to him. His brother Jonathan, who changed his name from DJ, was once a rising college football coach. He served as a graduate assistant at Iowa. He was attempting to get a full-time position but doors were closed at every turn.

Jonathan was willing to coach at the Division II level, but teams were unwilling to deal with the potential negative publicity. He explained the process to Sports Illustrated.

“They don’t want the negative publicity. Which is completely fine. I understand. [But] I couldn’t get anything. I was trapped,” Jonathan told Sports Illustrated.

It changed every detail of Jonathan’s life from job opportunities to women’s reluctance to go on a date with him. He now goes by his middle name, Jonathan, in hopes of a fresh start. After being unable to find work in college football, Jonathan began a roofing business, High Rise Roofing, in Wylie, Texas. 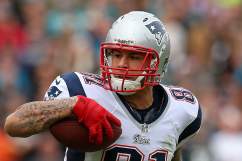 2. His Father, Dennis, Died at 49 After Complications From a Hernia Surgery

Dennis Hernandez passed away on January 6, 2006 after having complications with what was expected to be a routine hernia surgery. “Dennis was employed at Bristol Eastern High School and took great pleasure in watching his sons play sports and attending their games. He also greatly enjoyed being with his family and friends,” Dennis’ Hartford Courant obituary notes.

Some people close to Hernandez believe he never recovered from the the sudden death of his father. Aaron was just 16 years old at the time of his death.

Jonathan spoke with Sports Illustrated about how Aaron reacted after their father passed away.

“I saw a kid who was devastated. I think he was confused. He was lost. He cried, but [only] at moments. Crying is not always the answer, but being an emotional family, for him to put up a wall during the services. . . it was shocking to me. He was holding everything in. Our bodies just reacted differently,” Jonathan told Sports Illustrated.

3. Aaron’s Mother, Terri, Was Cut in the Face by Her Second Husband, Jeffrey Cummings

After the death of her husband, Terri married Jeffrey Cummings, who had a checkered past. According to the Daily Beast, Cummings had a criminal record that included drug-related charges as well as domestic violence.

His past followed him into his marriage with Aaron’s mother, Terri. After a night of drinking, he attacked Terri with a knife. According to the Boston Globe, she suffered cuts on her cheek, shoulder and wrist.

This landed Cummings back in prison, and Terri filed for divorce after the incident.

As The Daily Beast points out, this incident would have been around the same time Aaron’s mother indicated to the USA Today Aaron was turning his life around.

While Aaron maintained his innocence to his brother, Jonathan admitted to Sports Illustrated that he was unclear on what exactly happened.

“…I wish I had all those answers.I don’t know. I just know he cared about people. And some of the people he cared about, I wasn’t too fond of. I didn’t think they were the best for him at that stage in his life. But he cared so much. He really did. It’s very interesting how much he cared,” Jonathan told Sports Illustrated.

Terri faced her own challenges when her sons were growing up. She was arrested for her involvement in a gambling ring, but Terri appeared to simply be trying to provide for her family. No charges would stick against her.

William Gerace, the lawyer of gambling mastermind who was convicted, Marin Hovanesian, spoke with the Boston Globe about Terri’s role in things.

“It was a big-time operation in a little town. She was the phone operator, a minor player, not the brains,’’ Gerace told the Boston Globe.

4. His Mother Believed It Was the Death of His Father That Sent Aaron Into a Downward Spiral

Terri believed that the death of his father changed Aaron for the worst. She explained the impact in an interview with USA Today conducted years before the murder inverstigation.

“He would rebel. It was very, very hard, and he was very, very angry. He wasn’t the same kid, the way he spoke to me. The shock of losing his dad, there was so much anger,” Terri told the USA Today.

Terri thought her son had finally turned the corner and was on a better path as she explained to USA Today in the same 2009 interview.

“He’s my Aaron again. Just now everything’s getting better, and it took him three years. I thought I lost him for good. He wasn’t the same kid. Now he’s back, the same fun-loving Aaron,” Terri told USA Today.

TMZ reported the family is not convinced Aaron committed suicide and will launch an investigation into their son being potentially murdered inside of prison. TMZ explained the thought process of the family and Aaron’s lawyer, Jose Baez.

Aaron Hernandez may not have died as the result of suicide … it could be murder orchestrated within the prison walls — so claims the lawyer who represented him.

We’ve learned attorney Jose Baez — who just got a not guilty verdict for Aaron last week in the double murder case — has launched an investigation on behalf of Hernandez’ family and they are not buying the suicide story.

We’re told Baez believes this could be a murder either by inmates or the folks who run the prison.

After Aaron’s death, the family put up a sign on their house with the words “no comment” on the front door.

According to the Associated Press, the family has made plans to donate Aaron’s brain to Boston University for its research on CTE.