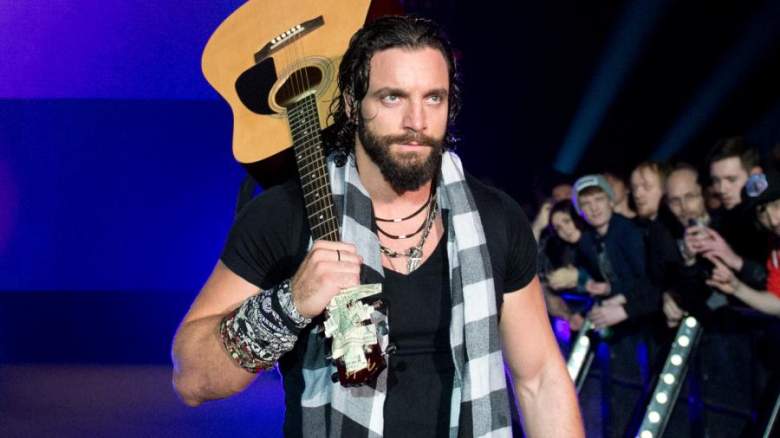 Elias Samson recently made his debut on the main WWE roster. (WWE.com)

Elias Samson made his debut on Monday Night Raw on April 17th.

During the superstar shake up show, Samson showed up in the middle of the tag team match; all he did was walk around with his guitar, and that was about it. Later, Samson was spotted walking through the crowd during a match between Charlotte and Nia Jax.

That’s about all that non-NXT viewers know about Elias Samson, who is also known as The Drifter. So who exactly is Elias Samson, and how did he come to work for the WWE? Here’s everything you need to know.

Jeffrey Logan Sciullo signed with the WWE in 2014.

He made his in-ring debut at an NXT taping on April 24th, 2014, performing under the name Elias Samson. However, Samson was not yet performing as his musician character. Instead, during his first match, he wrestled alongside Buddy Murphy, and in subsequent months, he performed alongside more popular wrestlers in occasional matches.

It would not be until 16 months after his initial debut that Sciullo took on the persona that he now uses on WWE programming.

Samson had a match against Bull Dempsey prior to the beginning of the actual show. Samson approached the ring with a guitar and was now being referred to as “The Drifter.” In the match, Dempsey defeated Samson.

Reception to Samson’s “drifter” debut was mixed, with Uproxx saying that Samson’s character was the worst thing about the show and noting in its review that it was very unclear what this gimmick was supposed to be.

“Maybe I’m spoiled by how instantaneously I fell in love with ‘Perfect 10’ Tye Dillinger, but ‘The Drifter’ Elias Samson leaves something to be desired,” Uproxx’s review said. “…If they want to do an El Mariachi gimmick with him (or, more accurately, an Antonio Banderas ‘How Do Say? Ah Yes, Show’ gimmick) or even turn him into NXT Jeff Jarrett, I’m fine with it. I just don’t want him to end up like Solomon Crowe, where you’re like, ‘hacker?’ but the only actual character description available is, ‘weird loser.'”

3. He Trained at the Iron City Wrestling Academy in Pittsburgh, Pennsylvania

NXT Superstar Elias Samson Talks Making It To WWENXT Superstar and Pittsburgh native, Elias Samson, talks his journey to getting signed by NXT and performing on NXT.2015-10-24T23:39:49.000Z

Elias Samson is from Pittsburgh, Pennsylvania. He says that he always wanted to be a WWE wrestler but wasn’t sure what the career path looked like.

“I always had in the back of my mind to be a WWE Superstar, but I never knew how to go about it,” he told the Pittsburgh Tribune Review. “I thought these guys were made in factories somewhere or something like that…then I saw the show Tough Enough when I was 14 or 15 years old, and I thought, ‘Oh, it is possible to do it.'”

When he was 18 years old, Samson says he attended his first independent wrestling show, and after seeing a match between Matt Hardy and AJ Styles, he knew that he had to become a professional wrestler himself.

Samson said that at this show, he was introduced to the trainers at Iron City Wrestling Academy, and he soon began to train there himself.

In 2012, Elias Samson was able to get himself a WWE tryout match against Dean Ambrose.

However, Samson says that this did not go very well, and so he was back wrestling on the independent circuit immediately.

“Things didn’t work out exactly as I wanted to, so I was back on the indies, and I decided, ‘You know what, I’m not taking no for an answer,'” Samson told the Pittsburgh Tribune Review. “‘I’m gonna do whatever I gotta do to get there.’ So I was at every TV taping, constantly in their ears doing whatever I could, until eventually I had another tryout match, and thanks to people like William Regal, I got a call [saying], ‘We’d like to offer you a contract here at NXT.'”

Samson went on to say that he found more confidence in himself as an athlete between the tryout matches.

“Once those things kind of come together, you just know within yourself, ‘Hey, I can take the next step,'” he said.

5. He Has Lost About 65 Percent of His Matches

According to Cagematch, the Internet wrestling database, Samson loses 64.6 percent of the matches that he is placed in. He wins 32.8 percent of the time. This means that out of the 271 matches he has performed in, Samson has won 89 of them.

This is roughly comparable to the match statistics of Bray Wyatt, who loses 64.2 percent of the time.

Read More
Pro Wrestling, WWE, WWE Raw
Elias Samson made his debut on Monday Night Raw on April 17th. So who exactly is Samson, also known as The Drifter?