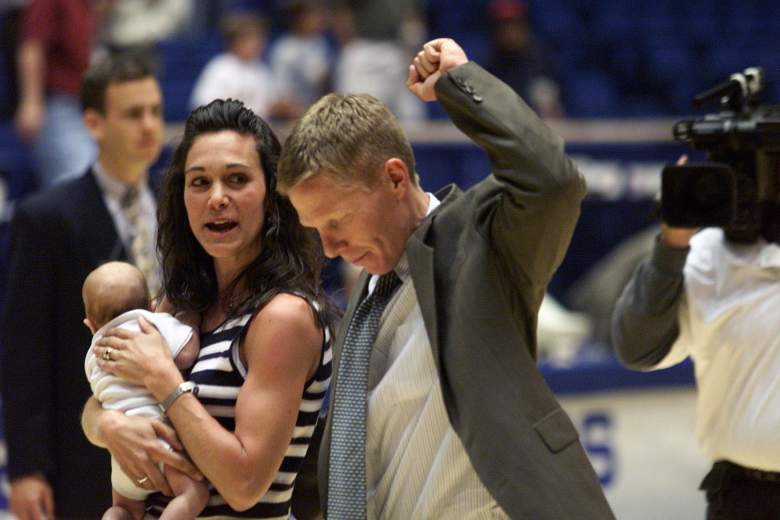 Mark Few walks off the court with his wife, Marcy. -Getty

Minutes after his team defeated South Carolina to advance to the national championship game, the normally reserved Gonzaga coach Mark Few was caught on camera doing a hand stand in the locker room.

Few has had plenty to celebrate over the last two decades. Gonzaga has made 19 straight NCAA tournament appearances. Gonzaga’s 2017 run has been the most significant for Few as it was the school’s first Final Four run.

While Few has had plenty of offers from larger programs, he has opted to remain in Spokane. Few’s $1,629,083 salary puts him outside the top 25 paid coaches despite his consistency at Gonzaga.

Few varies from the traditional basketball coach in a few ways. If you happen to catch a Gonzaga practice, you might notice a German Shepherd in the gym. According to the USA Today, Few has been known to bring his dog, Stella, to practice with him.

Few is not the tallest person either as this video shows him being engulfed by Przemek Karnowski.

Mark Few JUMPING into @PKarnowski's arms is everything #FinalFour pic.twitter.com/pD33Lu45oR

He also seems to have more balance to his life than some of his peers. Few enjoys spending time with his wife, Marcy Few, along with their four children. According to ESPN, the couple has two teenage boys (A.J. and Joseph) to go along with two younger children (Julia and Colt).

Few believes the secret to a good marriage and maintaining a successful basketball program is fly fishing. When he is not at practice or watching film, chances are you can find Few in the water. He spoke with ESPN about his fishing obsession.

It [fishing] just brings it down. I walk out the next day at practice in a much better place. Even come home in a much better place. My wife will tell you, [I’m] a much better parent, a much better husband. Everything. These seasons and the job can become all-encompassing sometimes. And so it’s good. It’s a great time to think and think about your team and plan and do things in that area because you have a lot of time just standing there in the river. I think [fly-fishing] is probably the biggest thing that I’ve always tried to do.

While Few graduated from Oregon, Gonzaga has become home. He has been the head coach for 18 seasons but with the program for 28 seasons counting his time as an assistant coach. Few’s loyalty to Gonzaga could have a lot to do with his father.

Norm Few has been a Presbyterian minister for over 50 years and still pastors the same church in Creswell, Oregon. Few spoke with the Bleacher Report about the impact of his father on his life.

“He never felt like he needed to jump from job to job like a lot of pastors. He was perfectly content with his life and didn’t want to change it. That had a huge impact on me,” Few told Bleacher Report.

The ironic thing about Few choosing to stay at Gonzaga is he has made it a program like the other schools that have often been perceived as having better opportunities. Gone are the days of Gonzaga as Cinderella, the Bulldogs have become a perennial powerhouse who consistently field one of the best teams in the country.

Regardless of whether Few and Gonzaga cut down the nets in Arizona, Few has proven Gonzaga has staying power. As long as he still makes times for fishing.