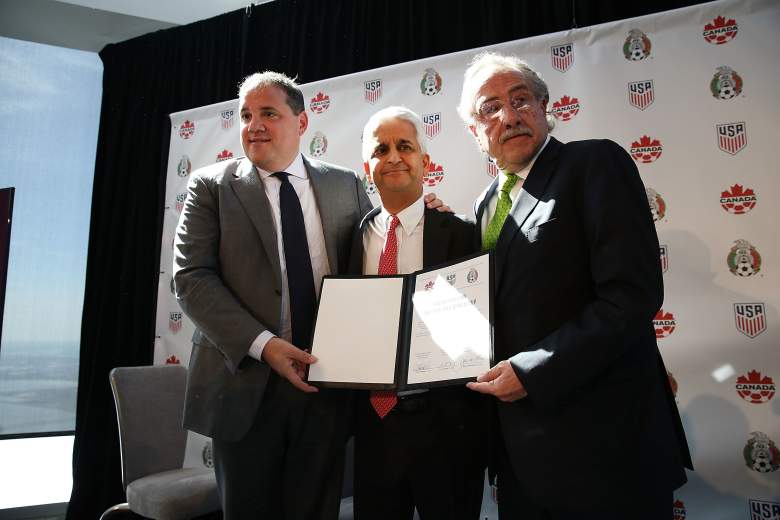 The United States, Mexico and Canada officially announced a joint bid to co-host the 2026 World Cup.

On Monday, federation presidents Sunil Gulati, Decio de Maria and Victor Montagliani publicly announced their bid during a press conference on the 102nd floor of the Freedom Tower in New York City.

Here’s what you need to know about the bid, and how the three countries plan to co-host the world’s biggest sporting event:

1. The Bid Includes 60 Games in the United States 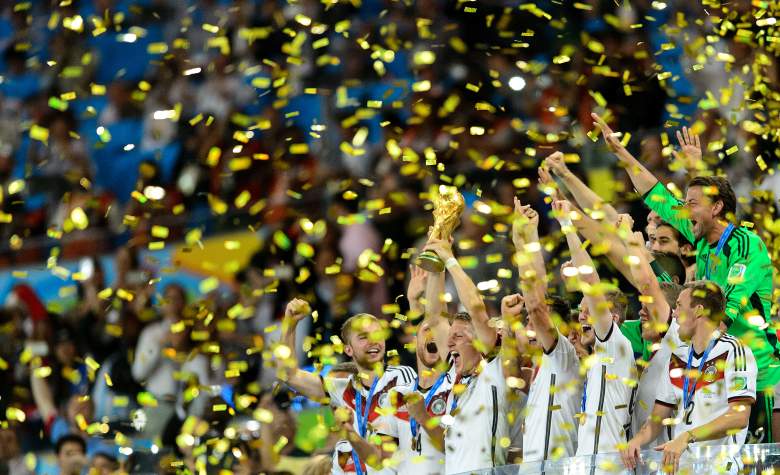 If successful, the bid would bring the global sporting event back to North America for the first time since 1994.

“This is a milestone day for U.S. Soccer and for CONCACAF,” U.S. Soccer Federation president Sunil Gulati said, according to The New York Times. “We gave careful consideration to the prospect of bidding for the 2026 FIFA World Cup, and ultimately feel strongly this is the right thing for our region and for our sport. Along with our partners from the Canadian Soccer Association and the Federación Mexicana de Fútbol, we are confident that we will submit an exemplary bid worthy of bringing the FIFA World Cup back to North America.”

Co-hosting a premier sporting event requires a high level of governmental support. The Trump administration has twice proposed travel bans from certain nations– something that is a foreseeable concern for FIFA.

Although Gulati strayed away from politics on Monday, he did emphasize that conversations were are already underway with the White House.

“We have the full support from the U.S. government for this project,” he said, according to ESPN. “The president of the United States is fully supportive and encouraged us to have this joint bid. He is especially pleased that Mexico is part of this bid, and it’s in the last few days that we’ve gotten further encouragement on that.”

FIFA will undoubtedly seek assurances from the U.S. that players, staff and fans would not face any undue burden in traveling to the U.S. if it is selected as a host nation. 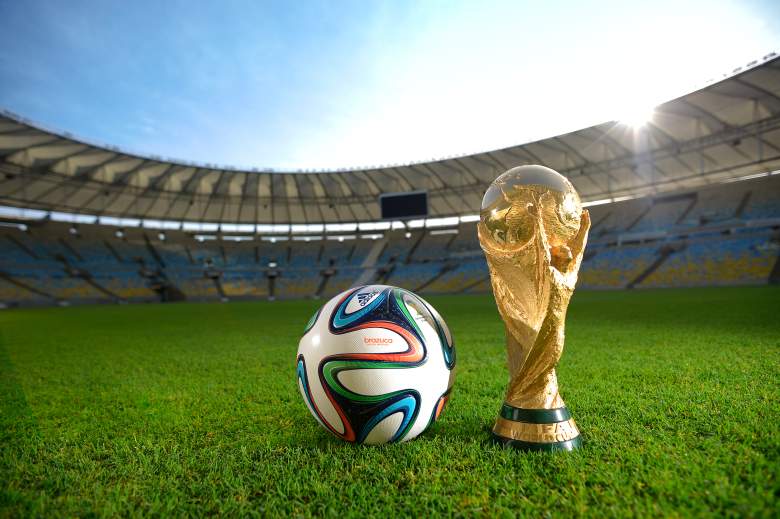 A general view of Brazuca and the FIFA World Cup Trophy at the Maracana. (Getty)

The joint bid from the three countries is the first to formally declare their intention to host the 2026 World Cup.

FIFA will decide the host of the tournament in May of 2020.

Only one previous World Cup has had more than one host. In 2002, Japan and South Korea were joint hosts, which posed logistical problems, including extra expense. Sepp Blatter, who served as FIFA president from from 1998 to 2015, told ESPN that having multiple hosts required twice as much cost.

With the tournament expanding to a record 48 teams and 80 matches for 2026, there will be more logistical hurdles. If games are played in three separate countries, transportation, scheduling and infrastructure will need to be coordinated and determined.

“The division of labor, the division of expenses — between the three of us, as well as with FIFA — is a model that has not been developed yet,” Gulati said on Monday.

3. The Event Hasn’t Been hosted in North America Since the 1994 Tournament 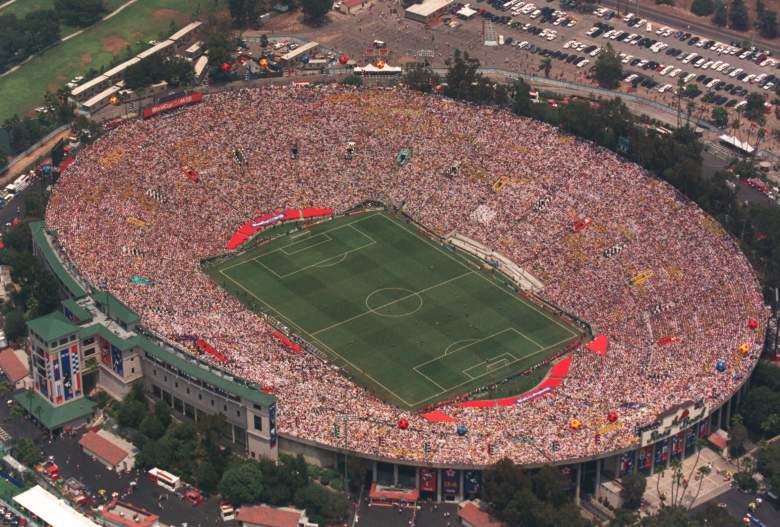 An aerial view of the Rose Bowl in Pasadena during the 1994 World Cup final. (Getty)

The U.S. staged the 1994 World Cup tournament, which was the most highly-attended and most profitable World Cup in history. Mexico hosted the tournament in 1970 and 1986.

4. Little Detail Was Provided on the Venues 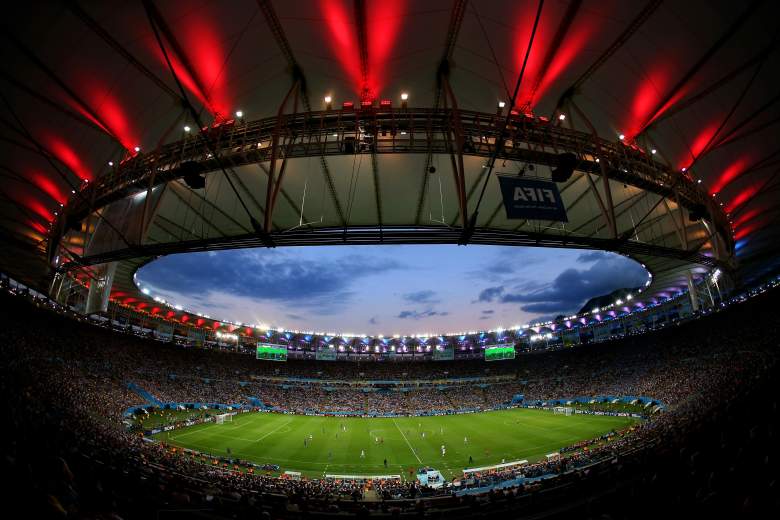 A general view of the stadium during the 2014 FIFA World Cup Brazil Final match between Germany and Argentina at Maracana. (Getty)

The U.S., Mexico and Canada each feature several stadiums capable of hosting games, which Gulati believes will strengthen their bid.

“Given what has happened in the last few World Cups and some of the Olympics Games, the thought of building sports facilities that don’t have a long-term use isn’t one that’s particularly inviting for anyone,” Gulati said during Monday’s press conference. “In all of our cases, we have stadiums that exist for professional teams or other events. We think that’s a huge advantage, not just for us, but for FIFA.”

The United States boasts a multitude of NFL stadiums, Mexico is home to the most famous soccer stadium on the continent in Estadio Azteca, while Canada has Rogers Centre as well as BC Place, which was the 2010 Olympic stadium and site of the 2015 Women’s World Cup final. In 2015, Canada faced criticism for using synthetic surfaces during the Women’s World Cup.

Little detail was provided about the venues on Monday. Specific cities and stadiums for the 2026 World Cup won’t be finalized for several years.

5. The Joint Bid Appears to be a Heavy Favorite 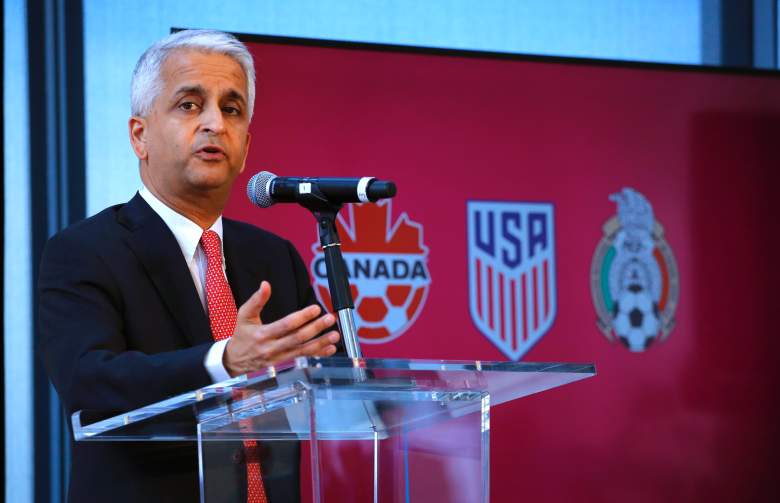 Gulati said the U.S. looked into making a solo bid, however he said he believed the proposal had a greater chance to be selected in a joint bid with Canada and Mexico.

The three rivals from CONCACAF, the body running soccer in North America, are expected to make a strong bid– one that seems poised to win.

With the 2018 World Cup in Russia and the 2022 World Cup in Qatar, Europe and Asia are ineligible. Since Africa hosted in 2010, and South America had it in 2014, the U.S., Canada, Mexico bid seems highly favored.

The U.S. controversially lost out to Qatar for 2022. In recent years, FIFA has been plagued by problems that prompted investigations of bribery.

Read More
5 Fast Facts, Soccer, Sports
The United States, Mexico and Canada officially announced a joint bid to co-host the 2026 World Cup. Here's what you need to know about the bid, and how the three countries plan to co-host the world's biggest sporting event.