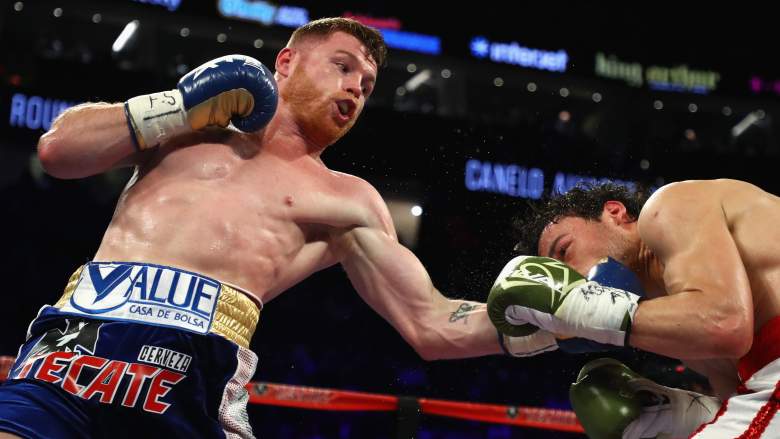 In a battle between Mexico’s–and perhaps boxing’s–most dominant star and the son of arguably the country’s greatest boxer of all-time, it turned out to be anything but a battle.

Saul “Canelo” Alvarez left no doubt in an absolutely clinical defeat of an over-matched Julio Cesar Chavez Jr., earning the win via unanimous decision. He picked apart Chavez with jabs, landed combinations and power punches, easily batted away Chavez’s attacks, never took a seat on the stool in his corner and won every single round on every single card:

So, what’s next? While Canelo will take time to enjoy his seventh victory in a row since losing to Floyd Mayweather three-and-a-half years ago, talk of Canelo vs. Gennady “GGG” Golovkin can resume right about…now.

And it’s no long speculation, either. During his post-fight interview inside the ring, Canelo called out Golovkin, a short hype video played on the T-Mobile Arena big screen, Triple-G made his way to the ring, and the fight was officially announced for September 16:

The biggest fight in boxing has been made. 9/16 #CaneloGGG Middleweight Championship Fight pic.twitter.com/0cZ8lnXbgi

The Canelo-GGG deal was signed last week. No venue is set.

And how it may affect another potential mega-fight:

There had been rumors of Mayweather-McGregor being on Sept. 16. They'll have to push that date back now if that fight does happen.

Fans and pundits everywhere have long been clamoring for what is the new version of Mayweather vs. Manny Pacquiao, and all the pieces were set up too perfectly for it not to happen. Set to vacate his 154-pound belt, Canelo had said that following Saturday night’s fight he would move full-time to 160 pounds, where GGG holds the WBC, IBF and IBO middleweight titles.

With how Canelo looked on Saturday, and with Triple-G’s relative struggles against Daniel Jacobs in March, the former will likely be dubbed as a favorite come Saturday, but that doesn’t mean it won’t be an absolutely massive draw between two of the best pound-for-pound fighters in the world.

Canelo’s win on Saturday turned into a snooze-fest, but with this dream matchup now official, it may have just been worth it.

Read More
Boxing
Canelo Alvarez made easy work of Julio Chavez Jr. on Saturday night. Up next: Gennady "GGG" Golovkin in what will be the biggest draw of the year.