Cortez Kennedy with his bust during the Class of 2012 Pro Football Hall of Fame Enshrinement Ceremony at Fawcett Stadium on August 4, 2012 in Canton, Ohio. (Photo by Jason Miller/Getty Images)

Former NFL player Cortez Kennedy has died. According to TMZ, Orlando police have confirmed that Kennedy passed on Tuesday, May 23rd and that a cause of death has yet to be determined. Orlando police state that “there is nothing suspicious” about his death and USA Today adds that he was “unattended” at the time. He was 48 years old.

Kennedy, who played 11 seasons for the Seattle Seahawks, was inducted into the Pro Football Hall of Fame in 2012, and is widely recognized as one of the greatest defensive tackles in history. TMZ reports that Kennedy’s surviving family members are currently traveling in Florida, and have yet to release an official statement. Various people has paid their respects to Kennedy on social media, including football legends John Elway and Jimmy Johnson, as well as the official NFL Twitter account:

Really sad to lose a guy like Cortez Kennedy. A great personality, a great player & I enjoyed competing against him. Prayers to his family.

Shocked at Cortez Kennedy passing..1 of the most talented players I ever recruited or coached…a fun loving person a sad day..

Here are five fast facts you need to know about Cortez Kennedy and his family.

1. He Wife Accused Him of Misdemeanor Assault In 1996

Kennedy was charged with misdemeanor assault after an alleged fight with his wife Nicole Kennedy in 1996. The Spokesman Review reported that Kennedy was arrested after Nicole said that he shoved her into a bedpost. She claimed that she’d been sitting in their bedroom with her 10-month old child when Kennedy came into the room and found her “penning a man’s name in her address book.”

Kennedy reportedly got angry with Nicole, and shoved her, causing her to fall back into the bedpost. She subsequently called the police and pressed charges. The defensive tackle subsequently pleaded guilty to a misdemeanor assault charge, and, under the advice of his lawyer Jim Clark, offered to take advantage of an eighteen month counseling program. In April of that year, however, the charges were dismissed.

Inexplicably, Nicole dropped out of sight in the days leading up to the court hearing, and as a result, Kennedy was cleared of all charges. According to The Seattle Times, “Bellevue District Judge Linda Jacke dismissed the case without prejudice against the 6-foot-3, 293-pound defensive tackle, a five-time Pro Bowler and 1992 NFL defensive tackle player of the year.”

Nevertheless, this didn’t stop Nicole from filing for divorce three days after the incident involving the bedpost. The two were separated not long after, and Kennedy, given his stable monetary status with the Seahawks and otherwise clean record, was awarded custody of their daughter Courtney.

3. He Has One Daughter, Courtney

Kennedy sat out the NFL season in 2000, and, upon considering a return the following year, decided to retire so that he could spend more time with his only daughter. The family moved to Orlando Florida, so that, as Encyclopedia of Arkansas put it, Courtney could “become her own person and escape his name.”

When Kennedy was inducted into the Hall of Fame in 2012, a teenage Courtney was on hand to cheer her dad on: “She can’t wait until I get to the Hall of Fame,” Kennedy told HeraldNet, “Sometimes I think she’s getting into the Hall of Fame, the way she’s been acting.” Osceola mayor Dickie Kennemore added “He’s as proud of her as he can be, if you talk to him long enough, you’ll hear about Courtney. He’s a great father, a great son, and a great family man. And, obviously, he’s one heck of a football player.”

4. He Always Considered Osceola His ‘Home’

Cortez Kennedy was an incredible athlete but he was an even better man.

He will be missed greatly. pic.twitter.com/eTAaTVSJsa

While not technically family, Cortez was always vocal about his love for the people in his hometown of Osceola, Arkansas. “We have pride in the fact that he’s from our town,” said Kennemore, whose town lists a population of fewer than 8,000 people. The mayor, and longtime friend of Kennedy, described it as “a close-knit, small community; if you’re from here, you’re family… He’s just one of the guys… All the locals look up to him, but they leave him alone and let him go about his business.”

Kennedy was more humble in his mention of Osceola, saying “I don’t need to be honored in my hometown. I got a street named after me. Everybody knows me in my hometown.” Kennedy was subsequently inducted into the Arkansas Black Hall of Fame in 2015.

5. He Thanked His Family In His Hall of Fame Speech

Kennedy made sure to paid his respects to his father Joe Harris when he was inducted into the Hall of Fame:

To my dad, Joe Harris, you have always been a great balancing factor in my life. I can remember not doing my chores right. Cutting the yard – I didn’t cut the yard right. You made me cut the grass at five-o-clock in the morning in the dark. You said, “Do it right the first time and you won’t have to do it again.” I got the point – don’t take short cuts. But since I’m older now – if I didn’t cut it right in the daytime, why the heck am I going to do it in the night time? I’m just throwing that out there right now. That doesn’t seem right to me. Thank you for the many nights we talked on the phone throughout my career, and thank you for teaching me how to be a man. I love you so much.

He also thanked his mother and, of course, his daughter Courtney.

Thank you, dad. My Mom, I love you so much. I’ll never forget when you made me quit football my sophomore year for having bad grades. My high school football team went to the state championship. Mom, you went to the game and sent back a postcard: “Wish you were here.” That was the turning point of my life. You know how much I love football, but when you sent me that postcard I thought, ‘Well, if you wanted me there you should have took me there.’ But I understand you care about me more as a son than as a football player. I love you so much.”

You can watch the Hall of Fame announcement above and watch the full speech here.

“To my daughter Courtney, you mean so much to me. I am so proud of the student athlete you are becoming and I trust every day that you would be the person I thought you would. I always told you this when you were born, that I would protect you, I would love you, and I would not let anybody harm you ever. Thank you, Courtney for being one of my biggest fans. But, like I’ve been saying – 250 more days you got to get out of the house and go to college. You know you can always come home to me, daddy’s little girl.” 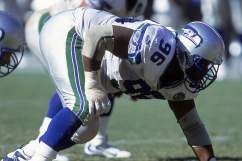 Cortez Kennedy Cause of Death: How Did Former NFL Player Die?