It’s been that kind of season for the New York Mets.

Following a 7-1 drubbing at the hands of the Milwaukee Brewers on Wednesday night, New York Mets mascot — known fondly to all as Mr. Met — expressed his frustration to what appeared to be some hecklers.

Exiting the concourse, Mr. Met turned around and gave the middle finger to a group of fans who, of course, filmed the encounter.

Twitter user @adelucia35 filmed the encounter and says he was just reaching for a high-five and did nothing to antagonize the mascot.

The team released a statement on the matter late Wednesday night:

According to the Associated Press, the employee who wore the costume Wednesday will not do so again.

To be fair to Mr. Met, he really has no other way of communicating, as noted by Newsday writer Anthony Rieber.

It will be tough for Mr. Met to apologize because he does not speak. Other than with his hands. Or finger.

However, Peter Botte of the New York Daily News provided an alternate theory:

Mr. Met has four fingers on each hand, so technically he doesn't have a middle finger. Right?

The Mets, who have been ravaged by injuries, currently sit at 23-28 — nine games behind the Washington Nationals for first place in the National League East. Prior to Wednesday night’s loss, New York had won three in a row and four of five. 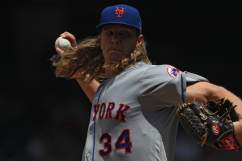