In an appearance Wednesday on The Herd with Colin Cowherd, Lavar Ball — father of projected top-five pick Lonzo Ball — got into a heated verbal exchange with reporter and co-host Kristine Leahy.

Fresh off the Los Angeles Lakers landing the No. 2 pick in the NBA Draft and thus furthering the narrative that Lonzo will play for L.A. — something Lavar Ball has always wanted, the elder Ball (in age only) popped on Cowherd’s show to talk about a variety of topics, including his “Big Baller Brand.” 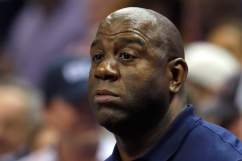 Lakers Draft Pick: How the Lakers Kept Their Pick in 2017

Leahy questioned how many of Lonzo’s branded shoes — which can cost upwards of $495 — Ball has sold so far, to which he responded, “Stay in your lane.”

Cowherd interjected, pointing out that Leahy is indeed a reporter but Ball did not want to hear it, saying “She can report to whoever she wants behind her,” referencing how Leahy sits toward the back of the studio and not directly next to the guest or Cowherd.

Leahy also argued that his brand could be more successful if it appealed more to women, to which Ball called her a “hater.”

“In order to have a successful company, I think you are going to have women that like your brand,” said Leahy.

Ball fired back, “Uh, yeah, if you have a women’s company. But we talking about Big Baller Brand.”

Ball has been quite outspoken about his son’s playing abilities since Lonzo emerged onto the college basketball scene as a freshman standout at UCLA. Back in February, Ball claimed his son was better than two-time MVP and Golden State Warriors star Steph Curry.

At another point in the interview, Cowherd brought up some past comments made by Fox Sports 1 contributor Jason Whitlock in regards to Lonzo.

“I don’t think he can comment on anything but snacks,” Ball responded.

LISTEN to the entire segment below: