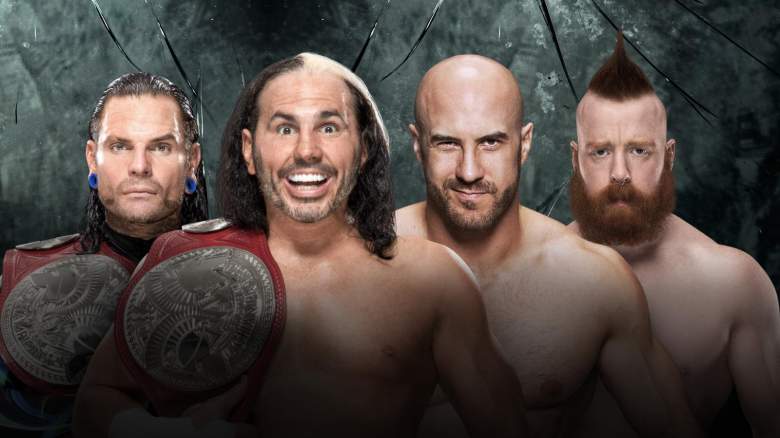 The Hardy Boyz faced Cesaro and Sheamus at ‘Payback.’ (WWE.com)

On WWE programming during these past several weeks, audiences have always chanted “Delete!” during segments with Matt and Jeff Hardy. So why is this, exactly? Where did the “delete” chants start?

The story actually begins on non-WWE programming. On Impact Wrestling in 2016, Matt and Jeff Hardy feuded with one another, and this culminated in an “I Quit” match in April 2016. The match ended in a no contest, as Matt and Jeff were both so horribly injured (kayfabe wise) that no one could be declared the winner. Matt was in particularly bad shape, being brought out of the arena on a stretcher.

The following month, the Hardys returned, and Matt debuted a brand new character: “Broken Matt.” Matt now had bleached hair and a British accent, and the idea was that he was “broken” as a result of Jeff’s actions the previous month. He blamed Jeff for breaking him, and he promised to make him “obsolete” by “deleting” him; this is where the “delete” chants began.

Matt also began referring to Jeff as “Brother Nero,” with Nero being Jeff’s middle name. This culminated in a match between the two, which Matt won.

Even after this feud between the Hardys ended, the “delete” chants lived on, and ever since the Hardys returned at WrestleMania 33, these chants have been audible during their matches. Occasional “Brother Nero” and “obsolete” chants can be heard as well.

However, there has been some question for the past month as to whether the WWE would even be able to use the “Broken Matt” gimmick, as Impact Wrestling has said that they own it. Matt Hardy still has not really utilized the Broken Matt character on Raw, and any references to Broken Matt have mainly just come from the crowd.

Some fans had speculated that following Payback, the Hardys would reintroduce the Broken Matt character, but this did not happen on Monday Night Raw this week.