Fans will have to wait until Monday night to see the inaugural set of games for the Big3 basketball league. However, the games took place on Sunday in Brooklyn at the Barclays Center, and the results have started to trickle in.

The teams play to 60, but each team must win by at least two points. Rashard Lewis was the star of the game for the 3 Headed Monsters. Lewis won the game on a three-point play, and finished with 27 points. Lewis nailed this free throw to close out the game:

Rashard Lewis with a walk off free throw to take the first game of the @thebig3 League. pic.twitter.com/huZxMdvVvS

According to ESPN, Ghost Ballers’ Jason Williams left the game with a right leg injury. Williams noted he was fine after the game to ESPN’s Coley Harvey, but the injury looked serious:

USA Today reports Corey Maggette was also injured, but appears to be okay.

Stevenson led all scorers in the game with 20 points. There are still two more games to go today.

Allen Iverson made his Big3 debut for 3’s Company as they took on Ball Hogs. According to Legends Circuit, 3’s Company won 61-51. Iverson played sparingly only notching nine minutes. Iverson finished with two points, two assists and a steal. Iverson was criticized by some fans in attendance for looking like a small glimpse of the player he once was.

Iverson is a player-coach, and admitted he does not expect to play a lot of minutes.

“But I think the best part about this game here tonight and all the other games, it was exciting all throughout,” Iverson told USA Today. “It didn’t need Allen Iverson the player, per se.”

Andre Owens led 3’s Company with 20 points while Rasual Butler had 22 points in a losing effort for the Ball Hogs.

ESPN noted strong attendance for the first week of games, but also admitted the game play was less than stellar. It will be interesting to see how popular the league can become. It has the sports calendar on its side with no other basketball to compete with.

Here’s a look at the results for the first four games courtesy of Legends Circuit.

*SPOILER: The first BIG 3 game was ?.. DeShawn Stevenson with the game winner from DEEEEP. #BIG3 pic.twitter.com/R6zZxQIbP0 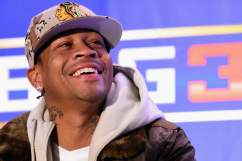 Big3 Basketball: What Time & TV Channel Are the Games on?

Read More
Basketball
The Big3 may not be broadcast until Monday, but the results are in. Check out the highlights from the opening set of games.