Footballer Cristiano Ronaldo has reportedly welcomed twins into the world. The 32-year-old soccer star felt it was time to expand his family and is said to be happy to have done so.

“He feels the time is right for his boy to have brothers to grow up with,” a source previously told The Sun.

Ronaldo is best known for his play on soccer pitches worldwide. He’s been recognized on four separate occasions as the best player in association soccer in the form of the Ballon d’Or. Ronaldo competes for his native Portugal in international play and is currently signed to Real Madrid in La Liga. His home country recognized as the best Portuguese footballer in history in 2015.

1. The Boy-Girl Twins Were Born on June 8

Ronaldo welcomed a son and a daughter on Thursday, June 8. He named his children Mateo and Eva. According to the Daily Mail, the news was reported on Portuguese TV channel SIC.

“Mateo and Eva, those are the names of Cristiano Ronaldo’s twins. The boy and girl were born to a surrogate mum. It’s a secret that Cristiano Ronaldo hasn’t yet revealed to the rest of the world,” shared the station.

It was previously reported that Ronaldo was expecting two sons.

“Cristiano and his family can’t wait to meet the new members of their clan. He likes to keep a tight lid on his private life but has told loved ones and close friends the baby boys are due to arrive very soon,” a source previously told The Sun.

2. The Twins Were Born Via a Surrogate

Ronaldo chose not to reveal any details about the woman carrying his twins. She is said to be a surrogate from the United States, but her name and background are not known.

When Ronaldo welcomed his first child, a woman identified as the family nanny spoke out about the athlete hiring a surrogate. Maria Manuela Rodriguez claimed that Ronaldo’s sister Katia told her that the child had “two Mexican mums.”

“She was a surrogate mum…She even told me the child had two mums, that the eggs were from one and another carried and gave birth to the child. And that both were Mexican. The child was born in a private clinic and the mother didn’t even see him, because she was covered up. The baby was born and she doesn’t know anything about him,” the nanny said, according to The Sun.

Proud of you. Congrats to win the copa 2017 and pichichi. ❤️️❤️️

Ronaldo is a father to Cristiano Ronaldo Junior, born on June 17, 2010. According to The Sun, it is unknown who the mother of Ronaldo Junior is, but it is believed that she was also a surrogate. There have been reports that Ronaldo Senior has full custody of the child and that he paid off the child’s mother to make that happen.

There have been reports that this unnamed woman lived in San Diego, California. However, a biography on Ronaldo revealed that his mother, Dolores Aveiro, picked the baby up from a hospital in Florida shortly after he was born.

“People speculate I was with this girl or another, or there was a surrogate mother. I have never told anyone and never will. When Cristiano [Junior] is going to grow up, I am always going to say the truth to him because he deserves it, because he is my son, but I am not going to say because people want me to say,” Ronaldo told Jonathan Ross.

4. Ronaldo Will Raise His Children at His Home in Spain

Always put on my CR Legacy fragrances before going out! ?? Get your own here www.cristianoronaldofragrances.com #CRFragrances

Ronaldo owns a modern home in Madrid Spain said to be worth over $5 million. It is unclear where the twins are at the moment or when they will be in Ronaldo’s care. According to The Sun, the television station that reported the birth of the newborns did not disclose which country they were born in.

Check out the video below to take a virtual tour around Ronaldo’s pad.

Ronaldo has been dating model Georgina Rodriguez, 22, for about seven months, according to the Who’s Dated Who website. They were spotted out in public for the very first time in November 2016. On one of their early public outings, Ronaldo and Rodriguez went to Disneyland Paris. Their date made headlines as Ronaldo wore a wig, baseball cap, and sunglasses to stay undercover. The paparazzi caught photos of him anyway.

The two first met at a Dolce & Gabbana party in Madrid. Rodriguez has been spotted at Santiago Bernabéu Stadium, cheering on her man and Real Madrid. 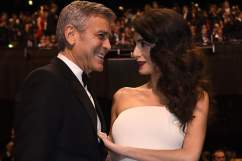