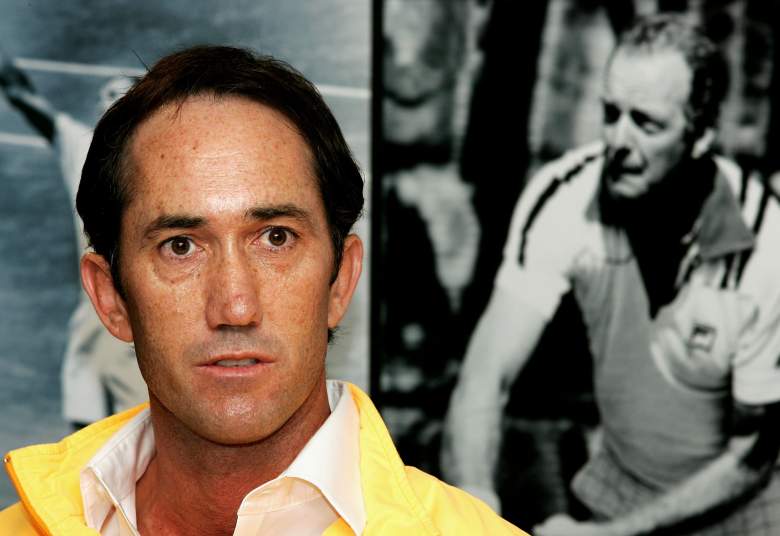 Darren Cahill speaks to the media at a press conference at Melbourne Park on January 21, 2007 in Melbourne, Australia. (Getty)

25-year-old Simona Halep will compete in the 2017 French Open women’s final, going up against Jelena Ostapenko.

Simona Halep got to this point with the help of her coach, Darren Cahill, a former tennis player himself who has been coaching a number of high-profile players since the early 2000s. Halep and Cahill had a bit of a falling out earlier this year, but they came back together in time for the French Open, and Halep says that this helped her to improve her attitude and make it to the final.

Here’s what you need to know about Darren Cahill, Simona Halep’s coach.

Darren Cahill began working as Simona Halep’s coach in January 2016. However, earlier this year, Cahill briefly quit as Halep’s coach. This came after the 2017 Miami Open, when Halep lost to the eventual champion, Johanna Konta. Halep says that Cahill told her he did not like her attitude and would need to take a break.

Halep says that this shocked her and ultimately was an effective wake up call.

“I just felt that it was like a shock, because I lost the coach,” Halep told Tennis.com. “So I have just to improve in this way, because he never had something to complain about my game and about the work that I do, because I’m working.”

Halep says that she changed her attitude and worked hard in order to win him back, and she later reached the semis at the Stuttgart Open. At this point, Cahill said he was ready to return as her coach.

“When I finished Stuttgart, he said he saw enough, and he’s ready to come back,” Halep told Tennis.com. “I asked him if he wants to come back before Madrid. He said yes, because I improved a lot, and he saw that I really wanted to change that. So the desire that I had in that moment made him come back and just be ready for me.”

At the Miami Open, Cahill told Halep that she is in a position where she can really change herself and make a difference, but it’s up to her.

“You’ve been in this position many times before and most times, you’re coming out second best,” Cahill told Halep. “Right now you have an opportunity to change things. It’s up to you. You can decide what you want to do here. You can go down this path and that’s fine. Or you can take a deep breath, put your towel on your head and try and get a little better in these situations. It’s as simple as that. It’s up to you. It comes from within. It’s no problem venting and getting all this stuff out, that’s no problem, as long as you are willing to make a difference. And if she beats you playing great tennis, no worries. Shake her hand and tell her well done.”

Halep has said that she needed to find a way to not get so negative during matches that do not go as well as she would like.

“I was putting myself down a little bit,” Halep told WTA Insider. “All the time on the court, even if I show that I’m talking with them, I put myself very down during the match. I don’t have [any problem] with anyone; it’s just my personality to be hard on myself.” 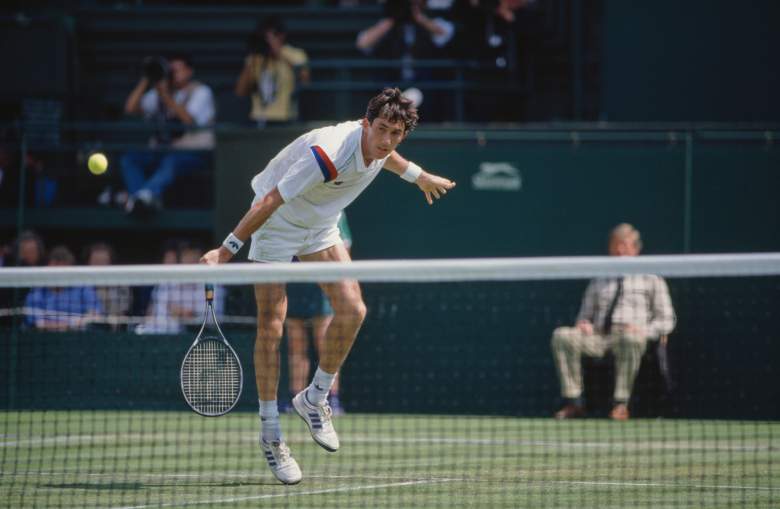 Darren Cahill during the 1988 Wimbledon Championships in London. (Getty)

Of course, Darren Cahill is a former professional tennis player himself, rising to fame during the 1980s.

Cahill won his first tour doubles title at the Melbourne Outdoor tournament in 1985, and at New Haven, he won his first top-level singles title. At the 1988 U.S. Open, Cahill reached the semifinals when he defeated Boris Becker, but he ended up losing to the eventual champion, Mats Wilander.

In terms of his doubles career, Cahill at the 1989 Australian Open finished runner up in men’s doubles, playing alongside Mark Kratzmann; the two went on to win the ATP Championships.

At the Davis Cup in 1990, Cahill played on the Australian team, which reached the final but ended up losing to the United States.

Cahill returned in 1995. By the end of his career, his peak singles ranking was 22. 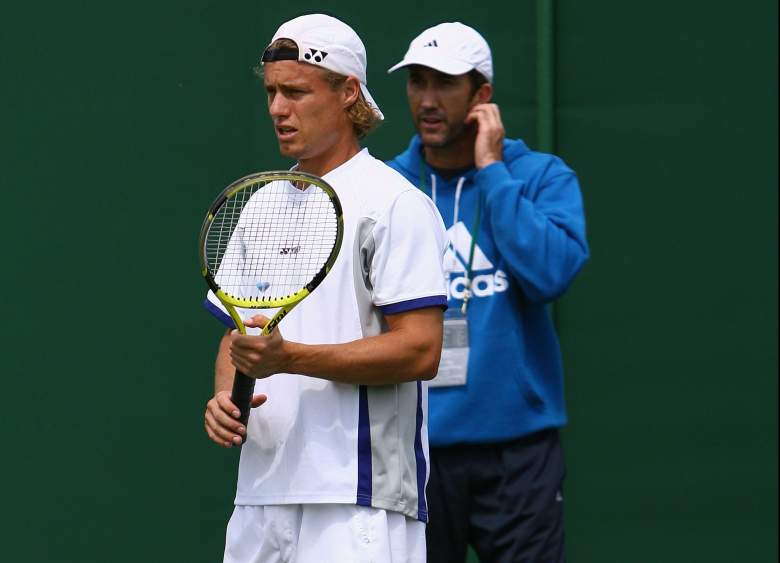 Lleyton Hewitt and Darren Cahill look on while practicing during previews for the Wimbledon Lawn Tennis Championships at the All England Lawn Tennis and Croquet Club on June 23, 2007 in London, England. (Getty)

Cahill has been working as a coach since the early 2000s, and from 1998 to 2001, he coached Lleyton Hewitt. Hewitt and Cahill met when Lleyton Hewitt was 12 years old, and Hewitt went on to become the youngest player in the world to be ranked number one. 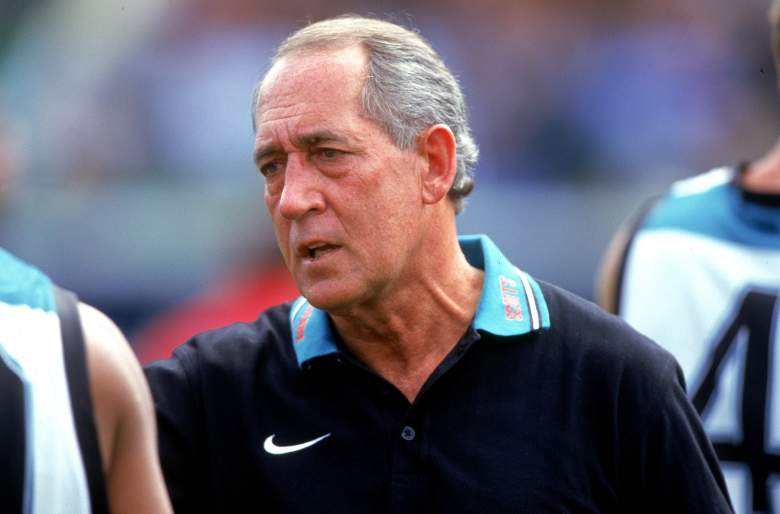 John Cahill, coach of Port Adelaide, addresses his players during quarter time during the round one AFL match between the Collingwood Magpies and Port Adelaide Power held at the Melbourne Cricket Ground 1997, in Melbourne, Australia. (Getty)

Darren Cahill was not the first member of his family to pursue a career in sports. His father is John Cahill, a retired Australian rules football player and coach.

Not only a tennis coach and ESPN analyst, but a damn good fisherman!! Another perfect day at Henley Beach. pic.twitter.com/pspVsyLr

In 2001, The Telegraph reported that Darren Cahill would no longer be coaching Lleyton Hewitt largely because Cahill was told he could not continue working with Hewitt if he brought his wife and son along with him; The Telegraph speculated that Hewitt’s parents did not get along well with Cahill for other reasons, and so they made this demand knowing that he would not go along with it.

“So is the wife and child ultimatum a smokescreen hiding the real story?” The Telegraph asked. “It is possible Hewitt’s parents had become jealous of his burgeoning, high-profile friendship with their son. They felt Cahill overstepped his bounds when he reportedly told Hewitt’s agents that the 20-year-old would have won a Grand Slam before the US Open had his attitude been better.”

According to The Courier Mail, Darren and Victoria live in Las Vegas with their two children, Tahlia and Benjamin.