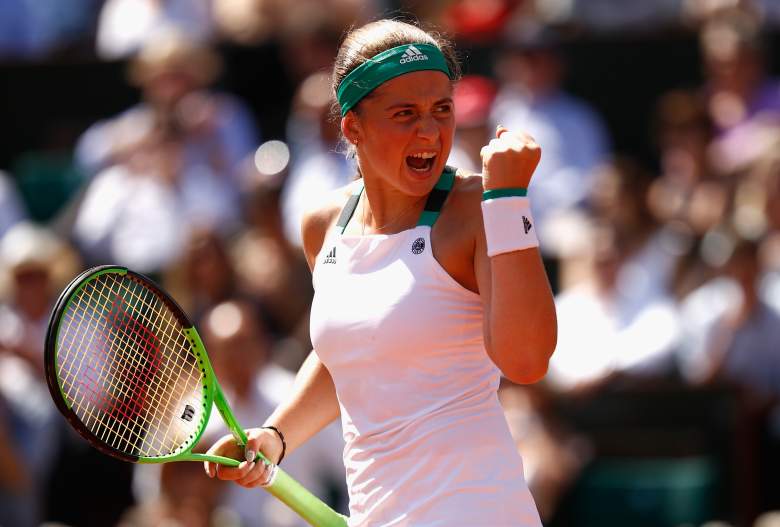 Jelena Ostapenko celebrates a point during ladies singles semi-final match against Timea Bacsinszky of Switzerland on day twelve of the 2017 French Open at Roland Garros on June 8, 2017 in Paris, France. (Getty)

This was a stunning victory, as Ostapenko was considered to have very little chance when the tournament began. At the start of the 2017 French Open, Westgate Las Vegas Superbook had Ostapenko at 100-1 to win the title, according to ESPN.

“We need personalities, and she’s a personality,” Evert said, according to ESPN. “She’s feisty, she’s outgoing and she’s right in your face, but isn’t that the new generation anyway? I’m sure in future matches, it will hurt her, knowing how emotional she is; it always hurts players who wear their hearts on their sleeves.”

So who exactly is Jelena Ostapenko, and what has been her path to the 2017 French Open? Here’s what you need to know.

1. She Was Born & Raised in Latvia 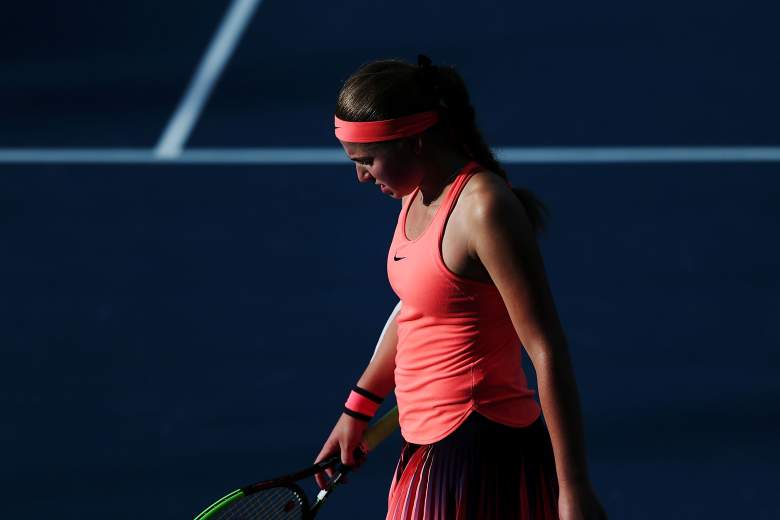 Jelena Ostapenko of Latvia looks on in her semi final match in the third set against Lauren Davis of USA on day five of the ASB Classic on January 6, 2017 in Auckland, New Zealand. (Getty)

Jelena Ostapenko is originally from Latvia, born on June 8th, 1997 in Riga, Latvia. She is the first Latvian to make a Grand Slam singles final. Ostapenko told Tennis.com in 2015 that she has no intention of ever moving out of her home country.

“I lived all my life there and I train there and I really like it there,” Ostapenko said. “I don’t want to move anywhere.”

Ostapenko told WTA that she is happy she is able to represent Latvia.

“I’m really happy that even though Latvia is a small country, we can have good players and we can represent our country,” she told MTA.

Ostapenko earlier this year became the first teenager to reach the French Open semifinals in a decade, with the last being Ana Ivanovic in 2007. Almost immediately after reaching the semifinals, however, Ostapenko turned 20.

2. She Pursued Ballroom Dancing as a Kid 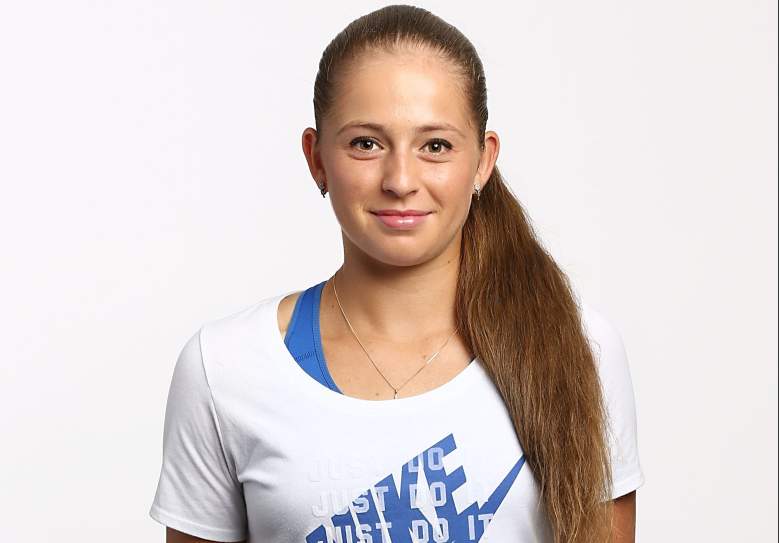 When she was young, Ostapenko pursued dancing, starting when she was 5 years old and going on to compete in the National Latvian Championships for Ballroom Dancing. She started playing tennis at a young age as well, and eventually she found herself needing to choose between the two.

“But then I had to chose one, like, tennis or ballroom dancing,” she told Yahoo Sports. “I chose the tennis because I liked it more and I had better results.”

Still, Ostapenko continues dancing to this day, and she believes that this has helped her with her tennis career.

“At home I try and go ballroom dancing four times a week,” Ostapenko told First Post. “It really helps with the footwork on the court. My favourite dance is the Samba.”

She also told WGA Tennis, “I think it helps because in ballroom dancing you also have to be coordinated.”

3. Her Father is a Former Football Player 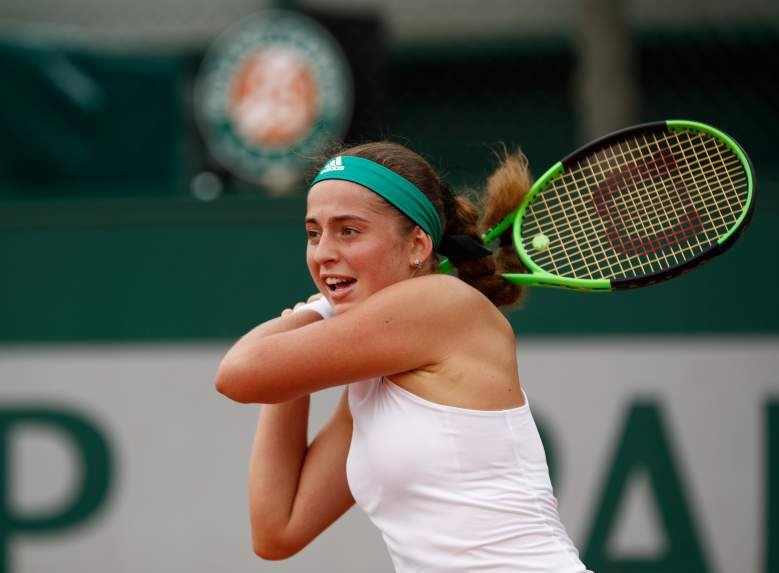 Jelena Ostapenko hits a backhand during the ladies singles first round match against Louisa Chirico of The United States on day one of the 2017 French Open at Roland Garros on May 28, 2017 in Paris, France. (Getty)

She told First Post that Jevgenijs used to play football in Ukraine, although she couldn’t actually remember the name of the team that he played on.

It has sometimes been reported that Jevgenijs Ostapenko is Jelena’s fitness coach, but Jelena says that this is actually not the case; she told ASAP Sports, “he’s not my fitness coach. He’s just helping me.”

As of February 2016, Jelena Ostapenko lived with her parents, and they also help her with her tennis career, something she said she enjoys.

“I enjoy that because my parents, they know me since I was born and they know me the best,” she told ASAP Sports. “So I’m really happy they can be with me all the time.”

4. Her Mother Used to Be Her Coach

After all, Jelena’s mother, who is also named Jeļena, used to serve as her full-time coach and travel with her to games.

Jelena’s mother was actually a tennis coach for years before her daughter’s career got started, and this is how Jelena was introduced to the sport in the first place.

“When I was a kid I was with my mom always at the tennis club,” Ostapenko told Tennis.com. “And she didn’t say that I have to play tennis, I just liked it. I went by myself to play against the wall, and that’s how I started.”

5. She Is Ranked 47th in the Women’s Tennis Association 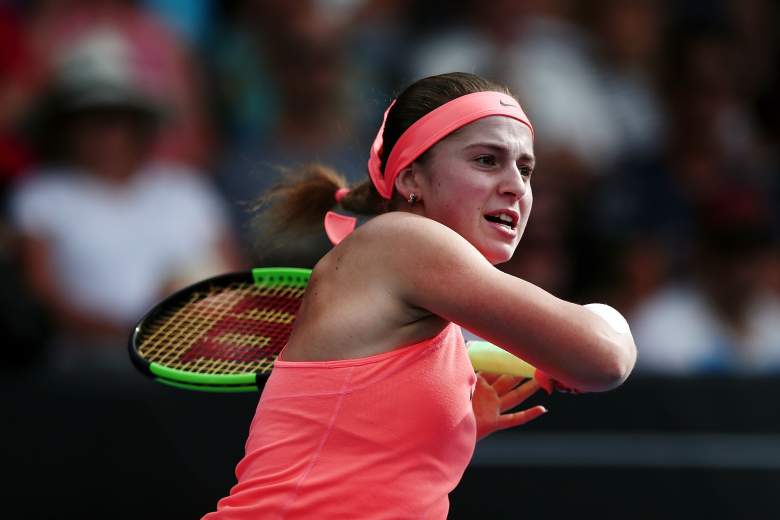 Jelena Ostapenko plays a forehand in her semi final match against Lauren Davis of USA on day five of the ASB Classic on January 6, 2017 in Auckland, New Zealand. (Getty)

Jelena is one of the 50 best female tennis players in the world, as her current Women’s Tennis Association ranking in 47. However, in January 2017, she reached a career-high ranking of 33 in the WTA.

In 2014, Ostapenko made a name for herself when she won the singles event at the junior 2014 Wimbledon Championships. She made her debut at the 2014 Tashkent Open later that year, defeating Shahar Pe’er in the first round but losing to Ksenia Pervak in the second.

At the 2016 French Open, Ostapenko was seeded in the singles for the first time, but she ended up losing to Naomi Osaka. However, Ostapenko surprised the world at the 2017 French open, defeating Louisa Chirico, Monica Puig, Lesia Tsurenko, Samantha Stosur, Caroline Wozniacki, and finally Simona Halep.