The 2017 NBA Finals have displayed just how unique of an experience a marquee NBA game is when compared to other professional sports. In football, the players are in pads and helmets, while even the closest seats are a good distance from the field. Baseball has the dugout, which serves as an exclusive sanctuary for players and the coaching staff.

In the NBA, there are times when fans sitting courtside are inches away from NBA stars. Fans saw that first hand in Game 1 of the 2017 NBA Finals as Rihanna and her crew were seen talking trash to Warriors players. Rihanna has been a long-time LeBron James fan, and is outward in her support for the Cavs over the Warriors.

At one point, Durant could be seen staring in her direction after hitting a big shot. Some have pointed to a “beef” between Durant and Rihanna. However, this seems to blow the incident out of proportion. Rihanna’s friends were yelling at Durant, and Durant let them know he was having a good game.

After winning his first title, Durant had a message for Rihanna in an interview with the USA Today.

“Love you, girl, but I got to do it. Gots to do it! You understand me?” Durant told USA Today. When asked if their interaction was a highlight of the series for Durant, he admitted it was a bit bigger than that.

“Oh, my gosh, more than that,” Durant told USA Today.

Heavy is here to take you through the history of Durant and Rihanna along with the singer’s obsession with James.

1. Durant Said Rihanna Would Be the One Woman He Would Marry Back in 2011

That girl @rihanna RT @AyeDerBaba94: @KDTrey5 So my question is… If you could marry any girl who would it be?? RT

Long before their friendly Cavs-Warriors rivalry, Durant let it be known that Rihanna was his ideal partner in response to a fan’s question on Twitter. This was back in 2011 when Durant was still with the Thunder, and James was leading the Heat to championships.

In 2012, Durant low key asked for a birthday shout out from Rihanna. “Somebody get @Rihanna to wish me a happy birthday and I’ll be good..ya understand,” Durant tweeted.

Somebody get @Rihanna to wish me a happy birthday and I'll be good..ya understand

As the USA Today pointed out, it only took Rihanna about three hours to oblige Durant. “Haha, happy birthday man! Make it special,” Rihanna tweeted back at Durant. 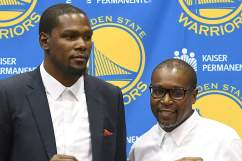 Count Rihanna as part of #TeamLeBron. She has made it clear over the years she is a massive James fan. She posted the above photo on Instagram of her “standing” next to James as he carried the 2016 championship trophy.

There was also this weird photo Rihanna posted with James number 23 pasted on her stomach in sunscreen.

According to The Undefeated, who provide a brilliant timeline of Rihanna and James’ relationship, the two have known each other since 2009. James has even given Rihanna shout outs on Twitter as this 2014 exchange shows.

“@KingJames: Shakira & Rihanna though!?!? They should have kept that to themselves. Not fair to mankind! Lol.” The KING!!! 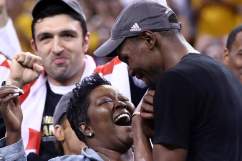 3. The Warriors Are Not Big Fans of Rihanna’s Music

Steph: "I don't think it was on there to begin with." pic.twitter.com/nnGsCzUNFu

While it does not seem like an official policy, don’t expect to hear Rihanna coming through the speakers when visiting the Warriors’ locker room. Durant’s teammates have his back as Rihanna’s friends appeared to be heckling him throughout Game 1 of the 2017 Finals.

Steph Curry was asked if Golden State had banned Rihanna’s music from the locker room. “I don’t think it was on there to begin with,” Curry responded with a quick burn. 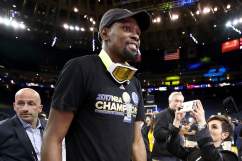 4. Durant Appeared to Stare Down Rihanna During Game 1 of the 2017 NBA Finals

Durant had himself quite a game in the 2017 NBA Finals opener. Durant finished with 38 points, nine rebounds and eight assists in the Warriors blowout win over the Cavs. Not that Durant needed any more motivation as he is going for his first championship, but Rihanna’s crew appeared to provide just that.

Several replays showed Rihanna’s assistant Jenn Rosales yelling “Brick!” at Durant as he was shooting free throws. Durant appeared to glance in their vicinity on several occasions but clearly made eye contact with Rihanna’s friends after nailing a three-point shot late in the game.

Durant opted to take the high road after the game refusing to admit he was staring down Rihanna during the game. 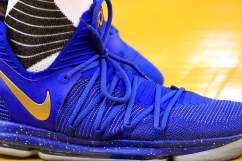 5. Durant Has Been Linked to Warriors’ Sideline Reporter Rosalyn Gold-Onwude

Great day at the office: rockin my brand new KD9s w/ KD, working on my pull-up, cameos from @fabbydavisjr1 @coseezy & even @iamsquint at practice! What a day! ?

All indications are Durant never got that date with Rihanna he wanted. However, it appears Durant has moved on. Terez Owenz reported Durant is dating Warriors sideline reporter Rosalyn Gold-Onwude. If true, it makes sense the two have not commented publicly given relationships between team employees and players are generally frowned upon.

Durant had previously been engaged to WNBA player Monica Wright, but the two broke off the engagement. Durant spoke with GQ about the deicison.

“I had a fiancée, but…I really didn’t know how to, like, love her, you know what I’m saying? We just went our separate ways,” Durant told GQ. “We was just hanging out, chilling. And I felt the energy. I felt, I need to do this right now. And I just did it. I was like…We’re engaged right now? We’re about to get married? So I was just like, cool! I love this girl. But I didn’t love her the right way.”