The New York Knicks and president Phil Jackson have parted ways after owner James Dolan agreed to buy out the remainder of Jackson’s contract, per Stefan Bondy of the New York Daily News. It’s been a tumultuous three seasons for the New York Knicks, as Jackson led the team to an 80-166 record and seemed to consistently be bumping heads with the team’s two stars in Carmelo Anthony and Kristaps Porzingis.

It was an uncomfortable situation with Anthony, who wasn’t waiving his no-trade clause and as Bondy pointed out, Jackson refused to buy him out of his contract.  The situation with Anthony got uglier and uglier as last season rolled on, and now the Knicks will have an interesting situation in front of them with the 33-year-old’s future.

As for Porzingis, it was just last week at the 2017 NBA draft, that Jackson admitted he was fielding trade offers for the young forward, which obviously didn’t go over well with Knicks fans. With Jackson now gone, let’s take a look at what the Knicks currently have on their 2017-18 roster, with projected starters having an asterisk next to their names.

Obviously, point guard Derrick Rose is a name you don’t see on the roster currently, although he’s made it known that he wants to remain with the Knicks, per Marc Berman of the New York Post. With the Knicks opting to draft French PG Ntilikina with their lottery pick, it seems unlikely that Rose would return unless the price was right for New York, or if they didn’t feel comfortable with Ntilikina seeing extended playing time right out of the gate.

Then there are the question marks about the future of both Anthony and Porzingis. It seems likely that Porzingis will remain in town for the long haul, but the Knicks need to work on building the roster around him. Anthony could very well still be a potential buyout candidate now that Jackson is gone, or even be traded if the Knicks can find a deal that Anthony would agree to waive his no-trade clause for.

It’s worth noting that the Knicks had pursued a deal that would potentially have sent Anthony to the Cleveland Cavaliers for Kevin Love last season, per ESPN’s Ramona Shelburne and Marc Stein. The deal obviously didn’t wind up happening, but it could wind up being something that’s worth revisiting this offseason.

As for the rest of the roster, Sasha Vujacic and Justin Holiday join Rose as unrestricted free agents. Ron Baker is a restricted free agent. The Knicks may be somewhat active in free agency, but getting Anthony’s contract off their books if at all possible would likely go a long way toward helping them bring in additional talent to pair with Porzingis. 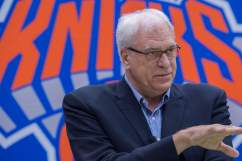