Lonzo Ball should be the future face of the Lakers’ franchise. (Getty)

The Los Angeles Lakers currently hold two picks in the first round of the 2017 NBA draft. But the only one that people are interested in talking about is the No. 2 selection, and rightfully so. When the lottery balls blessed the Lakers and landed them inside the top three, it meant that they held onto their pick, instead of losing it if they had landed anywhere else. In turn, this also meant the Lakers now get to pick the hometown kid in UCLA star Lonzo Ball, right?

As Broderick Turner of the Los Angeles Times explained, the Lakers front office is apparently split on whether to draft Ball or Kansas forward Josh Jackson. Both players are being brought in for a second workout as he points out, but Ball’s may have something to do with the report that he was “out of shape,” as Turner explains.

The Lakers Are Playing It Smart

This poses an interesting question and one that not many have considered. Are the Lakers truly interested in drafting someone other than Ball, or is this just one giant smokescreen to make sure they’re able to land him at No. 2 overall? SB Nation’s Tom Ziller summed it up best when stating that the Lakers are navigating “the Lonzo Ball minefield beautifully,” because they are.

No one knows what the Lakers are actually thinking. Maybe they’ve never wavered on wanting to take Ball at No. 2. Or, maybe they actually do love what they see from prospects like Jackson and Kentucky’s De’Aaron Fox. Regardless, since Magic Johnson took over, they’ve been doing things perfectly and in turn, it’s led to them having control no matter how it goes, looking like they got what they want.

And while that all stands true, and it was a fun ride to this point, the obvious choice for the Lakers is none other than Ball. Big Baller Brand, massive spotlight and intense father aside, he’s the right guy to lead this team back to the promised land.

The Lakers shouldn’t come out and say that Ball is their choice currently. They should keep doing exactly what they’re doing, but it doesn’t change the fact that he’s the right player for this team for a few different reasons.

Ball Can Play Either Guard Spot

While much of the talk has been about how Ball and current point guard D’Angelo Russell would be able to coexist, that should be put to bed for two different reasons. The first is that Ball isn’t just a ball-dominant player. He spent time on the floor with point guard Aaron Holiday and Bryce Alford, who also played some point. His numbers don’t take a dive when he’s not running the point, and since he’s such a strong shooter and his ability to get to the hoop is impressive, he’s able to play both guard spots.

As for Russell, well, this is the guy who should be moved to shooting guard, regardless. Marcelo Villa of The Sports Daily did an interesting breakdown of whether or not Russell is actually better suited to play shooting guard. This game on the heels of a game against the Cleveland Cavaliers last season in which he scored 40 points on 14-of-22 shooting and 7-of-12 from 3-point land.

“I feel like when you’re playing shooting guard, you’ve got to score the ball or make plays for your teammates,” Russell said, via ESPN’s Baxter Holmes. “Playing the point guard, it’s harder to do that, be aggressive, try to score the ball every time, because you’ve got to make at least one pass. But figuring it out, whatever position I’m in, I’m going to try to make the best of it.

“Whatever position they have me on the court, I’m a basketball player, not a point guard or a shooting guard.”

Putting either Russell or Ball at shooting guard would work just fine, and shouldn’t be the slightest bit concerning for the team’s front office.

His Basketball IQ is Unreal

There’s something to be said when a player shoots 73.2 percent from the field and 41.2 percent from the 3-point line. Add that to the fact that he averaged 14.6 points, 7.6 assists, six rebounds and 1.8 steals per game and you have one of the most well-rounded players in college basketball. Ball is a stud in every sense of the word, but his ability to find open players when it matters most and make the smart play is going to be a key to his NBA success.

Don’t believe it? Enjoy the highlights of UCLA’s comeback vs. Oregon last season.

The highlights of Ball’s dominance and great decision making could be highlighted for days, but this pass below is a prime example of the type of basketball IQ that he has.

Ball Can Handle Leading the Rebuild

This is probably the least important aspect of it because he won’t be tasked to do this alone. But we’ve seen from his demeanor both on and off the court that he can handle big moments and a massive spotlight being on him. Some may point to UCLA’s loss in the NCAA tournament and argue against that, but don’t forget they lost to a very, very talented and underrated Kentucky team. Oh, and only one team wins the national championship.

Ball’s navigated the waters beautifully to get to this point, and he’s everything the Lakers need. A leader, a playmaker, a great teammate and someone who can step up and dominate games when needed, which he did plenty of during his lone collegiate season. 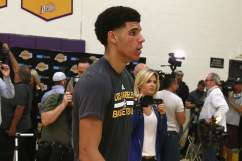