Getty Rafael Nadal of Spain plays a forehand during a match against Gilles Muller of Luxembourg on July 10 in London, England.

In 2010, American John Isner and France’s Nicolas Mahut played the longest match ever in what many called one of the best ever.

The match took so long to complete because like just four other professional tournaments, Wimbledon doesn’t use a tiebreak rule that many have become accustom to. Instead, Wimbledon, like The Australian Open, French Open, Olympic and Davis Cup, follow the advantage set rule, which means that one player must win a decisive fifth set by at least two games — no matter how long it takes — in order for it to end.

That was put to the test in the 2017 tournament when Gilles Muller of Luxembourg, seeded No. 16 in the tournament field, upset No. 4-seeded Rafael Nadal of Spain in one of the most entertaining matches of tournament play thus far.

Muller pulled off the upset, winning 6-3, 6-4, 3-6, 4-6, 15-13 and advanced to the quarterfinal round of the tournament. The match finished at 4 hours, 28 minutes, so well short of the Isner-Mahut match, but it required the match that was next on the same court — Novak Djokovic versus Adrian Mannarino — to be cancelled and rescheduled for the next day.

It’s already Muller’s best performance in his career at Wimbledon and his best in a Grand Slam tournament since reaching the quarterfinal of the 2008 U.S. Open. He advanced to play Marin Cilic of Croatia.

It was a disappointing showing for Nadal, who hasn’t gotten past the fourth round at Wimbledon since 2011 when he made the final. One year before that in 2010, Nadal won the tournament. 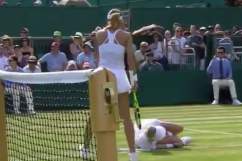