Getty Rumors have McGregor and Devlin tying-the-knot in 2018.

Although they have been by each other’s side since 2008, Conor McGregor and his longtime girlfriend, Dee Devlin, are not yet married.

Recent reports from Mirror say that friends expect McGregor to propose soon though. They are predicting a 2018 wedding for the couple.

The Sun also ran a similar story and quoted one of McGregor’s friends as saying, “The last few years have been all about his career and becoming a family, he said. “The Mayweather fight has taken up much of his time this year, but he’s taking a break after it. It will be the biggest wedding Dublin has seen. Conor doesn’t do things by halves.”

The 28-year-old Devlin has been with McGregor throughout his career, even before he became one of the biggest fighters of all-time.

“My girlfriend worked very hard throughout the years and stuck by me when I had essentially nothing,” McGregor told the Irish Mirror. “For me to be able to take her out of work, give her everything she’s ever wanted and to travel the world with, fills me with pride.”

McGregor and Devlin’s son was born back in May, and they named him Conor Jack McGregor.

“He came in at 8 pounds 14 ounces,” McGregor’s father Tony said at the time. “The whole family are absolutely delighted.”

McGregor is set to fight Floyd Mayweather Jr. tonight at the T-Mobile Arena in Las Vegas. McGregor is making a his professional boxing debut against Mayweather, who is widely considered one of the best pound-for-pound boxers of all-time. If McGregor were somehow able to defeat the 49-0 Mayweather, it would be one of the biggest upsets in the history of sports. 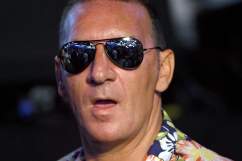