McGregor weighed 153 pounds, putting an end to Mayweather’s claims that McGregor wouldn’t make weight because he was too heavy. Mayweather previously accused McGregor of being a full 10 pounds over the limit

Mayweather weighed-in at 149 1/2 pounds, before the two fighters went face-to-face and started jawing at each other.

Each fighter had a turn doing a solo interview with Jim Gray. The crowd at Friday’s weigh-in was decidedly pro-McGregor.

Had McGregor weighed over 154 lbs., he would have received a fine taken out of the his fight purse. Since there is no belt on the line, the fight would still take place.

Since the fight is a boxing match, Mayweather will enter Saturday’s bout as a heavy favorite. Mayweather is a five-division world champion and has a 49-0 record. He will be exiting a 23-month retirement at the age of 40 to face McGregor.

McGregor, a 29-year-old southpaw, is the first UFC fighter to simultaneously hold titles in two different divisions and one of the best MMA fighters in the world. He will be making his professional boxing debut against Mayweather, one of the greatest boxers in history. 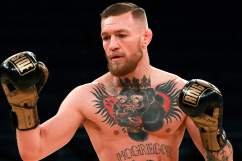