Showtime Sports has released the second episode of Mayweather vs. McGregor All Access. The episode is part two of a four-part series that airs Friday’s at 10 p.m ET on Showtime. Showtime’s All Access “provides viewers with an intimate portrait of some of the most compelling personalities in sports. Far from limited to the fight game, All Access will take you inside the personal lives of the fighters and behind the scenes of the provocative and often edgy world of boxing with unrestricted access.”

Episode 1 primarily consisted of footage of the promotional tour and the war of words involving Floyd Mayweather, Sr. The Mayweather’s were dismissive of McGregor’s skills, while McGregor belittled Mayweather.

Episode two provides a look at the two fighters as they prepare for their Aug. 26 boxing match at the T-Mobile Arena in Las Vegas, NV. The episode begins with Mayweather boasting about how rich he is and shows him sorting a gigantic bag of money.

The footage then goes to McGregor as he is trying on boxing gloves and headgear. McGregor is used to fighting with 4 oz. gloves in the UFC, but his match with Mayweather will have 10 oz. gloves.

Mayweather then went on to talk about his love of strip clubs, or gentleman’s clubs and that they might be his next venture when he is done with boxing.

The episode ends with McGregor and the controversial sparring sessions with Paul Malignaggi. The cameras were turned off for the sessions, but Conor McGregor claims Malignaggi “got his ass whooped.” 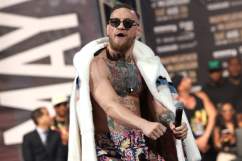