Alabama and Florida State are two historic college football programs. However, the two teams have not played as much as you may think.

ESPN has called this year’s 2017 game to kickoff the season the best opening game ever. While it may seem like as exaggeration, they may have a point. As SB Nation points out, Florida State, ranked number three, represents the highest ranked team the number one team has played to open the season.

The two teams last played in 2007 in Jacksonville, Florida. The Seminoles were victorious 21-14. The NCAA later vacated this win along with 11 others as part of a penalty for an academic fraud scandal.

According to Winsipedia, the two schools have only played four time prior to 2017. Alabama holds the series lead with a 2-1-1 record over Florida State. Technically, they are 3-0-1 based on Florida State vacating their lone victory.

Three out of the four games took place in the state of Alabama. The teams also played in 1965, 1967 and 1974. The Seminoles and Crimson Tide tied in their 1967 contest, well before overtime was even a thought in college football.

Alabama has the clear lead in national championships with 16 titles. Although there is some debate over the number as several titles were awarded before the formalized system we have had in the modern era.

According to SB Nation, if you go with 16 titles, Alabama only trails Princeton and Yale as schools with the most football championships.

Nick Saban has won five titles over his career, and four of the championships have come during his Alabama tenure. Jimbo Fisher’s lone national championship came in 2013. Both coaches hail from West Virginia.

Florida State has won three national championships: 1993, 1999 and 2013. Jameis Winston led the Seminoles to their latest title before heading to the NFL.

Given it has been ten years since the two teams last met, it is hard to tell when Alabama and Florida State will next meet. Seminoles and Crimson Tide fans hope it is back in the Mercedes-Benz Stadium for the national title. 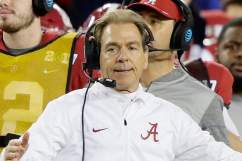