When asked if the president was aware of Hill’s comments, Sanders said she wasn’t sure if Trump knew about them, but she thinks Hill should be fired.

“I’m not sure if he’s aware, but I think it’s one of the more outrageous comments that anyone could make. And certainly something that I think is a fireable offense by ESPN,” Sanders said.

When asked why she thought prominent African Americans feel as Hill does, Sanders deflected the question.

“I’m not going to speak for that individual, but I know that the president has met with people like [South Carolina Senator Tom Scott], who are highly respected leaders in the African American community. He’s committed to working with them to bring the country together,” Sanders said. “I think that’s where we need to be focused, not on outrageous statements like that one.”

“The height of white privilege is being able to ignore his white supremacy, because it’s of no threat to you. Well, it’s a threat to me,” Hill wrote. “Trump is the most ignorant, offensive president of my lifetime. His rise is a direct result of white supremacy. Period. He has surrounded himself with white supremacists — no they are not ‘alt right’ — and you want me to believe he isn’t a white supremacist?”

Hill also called Trump a “bigot,” adding that “if he were not white, he never would have been elected.” She also wrote, “I hate a lot of things but not enough to jeopardize my fellow citizens with an unfit, bigoted, incompetent moron. But hey, that’s just me.”

ESPN later issued a statement, saying that Hill recognized “her actions were inappropriate.”

“The comments on Twitter from Jemele Hill regarding the President do not represent the position of ESPN,” the statement reads. “We have addressed this with Jemele and she recognizes her actions were inappropriate.”

Hill’s comments came weeks after Trump’s reaction to the violence in Charlottesville, Virginia last month. At first, Trump failed to condemn white supremacists and neo-Nazis, insisting that there was violence on “many sides.” He later did condemn them in a prepared speech, but he then backpedaled in a Trump Tower press conference. He insisted that there was “very fine people on both sides.”

Both the House and Senate have unanimously passed bipartisan legislation to formally condemn white supremacy and have sought Trump’s signature. When the White House was asked if Trump will sign the bill, a spokesperson said there were “no announcements at this time.” 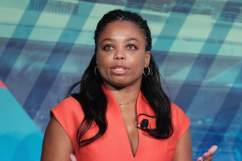