Week 3 featured a Sunday full of NFL protests. All eyes were on the Oakland Raiders and Washington Redskins to see how the players would respond to the national anthem prior to the primetime matchup.

NFL Network’s Ian Rapoport was one of the first to report the entire Raiders offensive line would kneel for the anthem. The unit is the only all African-American unit in the NFL.

This will be powerful: #Raiders offensive line, the only all African-American unit in @NFL, plans to sit or kneel together during the anthem

The offensive line was joined by the majority of Raiders players who sat on the bench during the anthem.

Majority of the Raiders players are sitting during the anthem. pic.twitter.com/UiTuNKNyXH

Derek Carr was standing and appeared to be praying during the anthem.

Derek Carr, standing for the National Anthem and praying, that's what I want to see. What a stand up guy.?? Lets go Raiders! pic.twitter.com/9PPu7juZmj

NBC’s Michele Tafoya reported the Raiders wanted to stay in the locker room for the anthem as the Steelers, Titans and Seahawks did earlier in the day. However, they opted not to as the timing for primetime games is different, and the team would have forfeited the coin toss.

About a year ago, before our Tennessee game, I met with Derek Carr and Khalil Mack to ask their permission to have Tommie Smith light the torch for my father before the game in Mexico City. I explained to them that I was asking their permission because I had previously told them that I would prefer that they not protest while in the Raiders uniform. And should they have something to say, once their uniform was off, I might go up there with them. Over the last year, though, the streets have gotten hot and there has been a lot of static in the air and recently, fuel has been added to the fire. I can no longer ask our team to not say something while they are in a Raider uniform. The only thing I can ask them to do is do it with class. Do it with pride. Not only do we have to tell people there is something wrong, we have to come up with answers. That’s the challenge in front of us as Americans and human beings.

Washington sports reporter Grant Paulsen reported Redskins owner Daniel Snyder made it a point to be on the sideline with the team during the anthem.

Kirk Cousins, Terrelle Pryor and the majority of Redskins players locked arms while standing for the anthem. Jamison Crowder, Josh Doctson, Brian Quick, Niles Paul, Ryan Anderson and Chris Carter were among the Redskins players who knelt during the anthem. They were surrounded by their teammates who had their hands on their shoulders.

Redskins linebacker Zach Brown was among a number of NFL players who did not take kindly to President Donald Trump’s suggestion that NFL players should be fired if they kneel during the anthem.

“Trump stay in ur [sic] place…football have nothing to do wit u smh,” Brown tweeted.

While these are being referred to as anthem protests, ESPN’s Dan Le Batard points out the players are not protesting the national anthem, but attempting to use the anthem to point out inequality throughout the country.

Please stop calling it an anthem or flag protest. It's a police brutality or inequality protest. 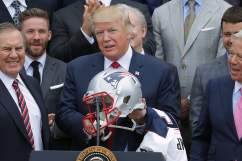 What Did Donald Trump Say About the NFL?