The New York Yankees have taken one fan’s thumbs down gesture and adopted it into their lineup in the most literal way.

If you’ve been watching any New York Yankees baseball games lately, you might notice that some players on the team are giving a thumbs down to each other. You may be surprised to find out that the NYY thumbs down is actually a good thing — if you’re a Yankees fan, that is.

Here is what you need to know about the Yankees’ thumbs down gesture:

1. It All Started with a New York Mets Fan Named Gary Dunaier

Whatever the Yankees did in the top of the 4th this guy was having NONE of it. Hall of Fame thumbs down pic.twitter.com/mrOfOwSkJX

It was Monday, September 11, and the New York Yankees were playing the Tampa Bay Rays at Citi Field in Flushing, New York. The game was supposed to be played at Tropicana Field in St. Petersburg, Florida, but was relocated due to Hurricane Irma.

Season-ticket holder Gary Dunaier was sitting two rows behind the Yankees dugout when Yankees third baseman Todd Frazier knocked one out of the park in the fourth inning. The three-run homer didn’t make Dunaier happy, so he did “the best thing [he] could do.” He held up his hand and gave Frazier — and all of the Yankees fans around him — a thumbs down. Little did he know that his hand gesture would go viral.

“It was a spur-of-the-moment decision. The best thing I could do was make the thumbs down. That’s pretty much the origin,” Dunaier told the media after the game.

2. Frazier Has Completely Adopted the Thumbs Down

It’s not surprising that a Mets fan didn’t love Frazier’s home run, even if it didn’t mean anything for the Mets. However, Frazier was so entertained by the fan’s gesture, that he started using the thumbs down during the game — whenever something good happens to him. If he gets on base, for example, he will give the dugout a thumbs down. A home run will certainly be cause for a stadium-wide thumbs down.

Frazier is so into it, in fact, that he actually video-bombed his teammate Matt Holliday during his interview with the MLB Network earlier today. As you can see in the clip below, Frazier moves into the shot wearing a thumbs down T-shirt and gives the unofficial signal.

3. The Thumbs Down Has Become a Rally Cry for the Bronx Bombers

Since the New York Yankees haven’t seen October baseball in a couple of seasons, the thumbs down gesture has become a post-season rally cry for the team. It may be just the thing the team needs to get them on a high just before the regular season ends.

The Yankees could be heading into the post-season if they are able to win four more games (they beat the Minnesota Twins on Wednesday, 11-3). The Wild Card spot is looking really good for them right now (insert thumbs down here) as they sit just three games behind the Boston Red Sox.

4. Plenty of People Are Boycotting the ‘Thumbs Down’ Gesture Because Haters Gon’ Hate

MOAR of this ???? #Yankees pic.twitter.com/fr0dR2bXlo

If you didn’t like the Yankees before, chances are, you’re not going to like them now. And the whole thumbs down thing has probably ticked you off in a big way. Several people on social media have already voiced their disgust over the Yankees adopting the thumbs down, vowing to never use the gesture while the Yankees are making it part of their game.

However, that’s not stopping Frazier or any other Yankees player or fan from giving the thumbs down to celebrate. Social media has been lighting up with thumbs down emojis following New York’s sweep of the Twins.

5. You Can Now Buy a Thumbs Down Shirt

Thumbs Down Guy started a Thumbs Down Movement, fueled by @FlavaFraz21. Get the shirt now, available in all sizes: https://t.co/jzbxjuKMvx? pic.twitter.com/R5zwV3ttRX

While the rest of the internet is still laughing at this whole story, some outlets are seeing major marketing opportunities. Thumbs down T-shirts are now for sale online through the website BreakingT. The officially licensed shirts will run you about $24.

“When opposing fans start throwing out the thumbs down, it must mean good things for New York. When Todd Frazier and the rest of the team are doing it, it means GREAT things for New York,” reads BreakingT’s description. The website even has a photo of Dunaier, who is just about as internet famous as you can get right now.

Other shirts are also becoming available as retailers begin to see that the market is growing. On Wednesday, the whole Yankees squad was photographed wearing a pinstripe version. Check out the photo below. 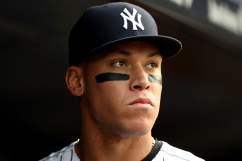