Ashley Wagner is a favorite to earn a spot to represent the United States in PyeongChang.

The three-time U.S. National Champion is one of the oldest to contend for a place on the 2018 Winter Olympic team.

Throughout her career, Wagner has credited much of her success on the ice to her family.

Here’s more on the 26-year-old figure skater’s background and family.

1. Wager Grew Up in a Military Family

GettyAshley Wagner competes in the Figure Skating Team Ladies Short Program during day one of the Sochi 2014 Winter Olympics.

Wagner was born on a U.S. Army Base in Heidelberg, Germany, where her father Eric Wagner, who is a retired lieutenant colonel was stationed at the time.

Wagner credits much of her toughness on the ice to growing up in a military family.

“I grew up in a military family. My dad was tough as nails, but you know what? He made me tough as nails,” she told ESPN. “If anything ever went wrong or if I had a bad day, I was never allowed to feel sorry for myself. My dad would just tell me to not be a wimp. That might not sound like the nicest parental approach [laughing], but that’s what most kids need to hear these days.”

She also has said that the military broadened her horizons— exposing her to many different places and people from an early age.

Wagner was home schooled by her mother for seven months before entering Whitman Middle School. She returned to public school because she missed it.

Wagner later attended West Potomac High School through the 2007-2008 school year. After studying at Northern Virginia Community College through its online Extended Learning Institute, she enrolled in Saddleback College in California where she studied sports journalism. 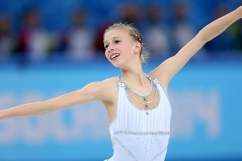 2. Wagner Moved 9 Times in Her Childhood

Wagner hopscotched around the country for much of her early childhood due to her father serving as an Army officer. She moved seven times with her family before they settled in Northern Virginia when Ashley was 10.

Her father worked at the Pentagon during the 9/11 terrorist attack, and he still lives in Alexandria, Va.

In addition to living in Germany, where she was born, Wagner has lived in California, Alaska, Kansas, Washington State, and Virginia.

Wagner trained in Kansas City and Tacoma, Washington until her family moved to Portland, Oregon, where she was coached by Tonya Harding’s former coach, Dody Teachman.

In January 2002, Wagner began training with Shirley Hughes in Alexandria, Virginia, which is when her figure skating career began to blossom.

After training six years alongside Hughes at Mount Vernon Ice Arena, Wagner moved her training base to Wilmington, Del., to work with Priscilla Hill, the former coach of Johnny Weir.

The figure skater currently trains and lives in southern California but considers Seabeck, Washington, her home.

3. Wagner Began Skating at the Age of 5

As she recalls, her mother offered her a choice of ballet lessons or ice skating lessons. In a refusal to wear pink shoes, Wagner began figure skating in kindergarten.

“There was nothing to do there in the winter and I was driving my mom crazy,” Wagner told Skate Today. “So I had a choice of ballet or skating and I wasn’t going to do anything in pink shoes.”

According to her mother, Wagner quickly took to the sport and showed natural talent early on.

Always a competitor, Wagner told The Washington Post she strived for gold from the very beginning.

“From a young age, I was viciously competitive,” she said.

By 1998, Wagner set her sights on the Olympics. Wagner told Ice Network she first knew she wanted to compete in the Olympics when she watched Tara Lipinski win the gold medal at the 1998 Winter Olympics on television.

Wagner excelled in skating from a young age. Her mother, Melissa James explained that their family would encourage Wagner to try other sports that she found challenging “to even it out a bit.”

Wagner tried other sports, like tennis and basketball, but figure skating was always her passion.

“Within the family, we tried to put her through the ropes in other sports, but all she ever wanted to do was skate,” James explained to ABC.

5. Wagner Declared Financial Independence From Her Parents at 18 Years Old

Figure skating not only requires a demanding time commitment from skaters and their families, but also a large financial sacrifice.

For an advanced skater, the cost for a pair of skates alone is around $1,000. While the annual cost varies depending on level, a highly competitive skater can easily spend $30,000 to $45,000 on training, equipment and travel.

Once Wagner turned 18, she declared her financial independence and moved out of her parents’ home. The figure skater explained she needed to find out if she was competing for herself or her parents.

The New England Skating Fund helped Wagner to cover some costs of her training along with her part-time job selling jeans at American Eagle.

“Some of these kids live inside the rink; I’ve always let my kids live,” James told the Washington Post. “They’re going to grow up. They need to know what’s out there. They need to make mistakes. Yes, I’d like to have a safety net underneath them. But if I didn’t let her go when she was 18, she never would have been where she is today.”