Lionel Messi will look to help send Argentina to Russia on the final day of qualifying.

Fans are in danger of watching a 2018 World Cup without Lionel Messi. Argentina heads into the final day of World Cup qualifying with their status very much up in the air.

The top four teams in CONMEBOL are guaranteed a spot, while the fifth place team will advance to a playoff against an Oceania squad. The winner of the match will head to Russia, giving CONMEBOL a chance for as many as five World Cup teams.

To qualify, Argentina’s best-case scenario requires a win over Ecuador, but the country also needs Chile not to upset Brazil. Here’s a rundown of Argentina’s qualifying scenarios courtesy of CBS Sports.

1. Win over Ecuador (also need Chile not to defeat Brazil)
2. Colombia and Peru ends in a draw (along with an Argentina win)
3. Peru defeats Colombia by a lesser margin than Argentina’s victory

Heading into the final day of qualifying, Argentina sits in sixth place. They do not fully control their own destiny. Argentina could win, but would finish with less points than Chile and Colombia if both teams win. In this scenario, the best option for Argentina would be fifth place which would send Argentina to a playoff match.

A draw from Argentina would seriously hurt their chances of qualifying. Argentina would be rooting for a loss from Chile. They would also need Paraguay to lose to Venezuela. If Chile, Colombia and Paraguay all lose (assuming Argentina draws), fourth and fifth place would come down to goal differentials.

Got all that? The simplest way for Argentina to qualify is to win, and Chile to either lose or draw against Brazil.

Here’s a look at the current CONMEBOL standings. Brazil has already won the group. Teams in bold would automatically qualify as things stand now. 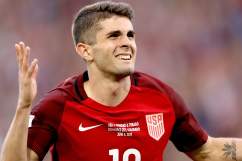 Christian Pulisic Salary: How Much Does the USMNT Player Make?