Warning: The above video features graphic footage of a horrific leg injury.

The start of the NBA season tipped off with a terrible injury. Halfway through the first quarter of the Celtics-Cavs game, Gordon Hayward suffered a horrific leg injury as he landed awkwardly during his attempt to catch an alley-oop pass. Hayward made a back-door cut to the basket, then collided in the air with LeBron James and Jae Crowder.

Harlan simply reacted to the play, and it was not an official diagnosis. Hayward’s ankle appeared to dangle in the highlights indicating this was a major injury. It was a terrible turn of events given Hayward was making his Celtics debut after signing with Boston this off-season in free agency.

The Celtics announced Hayward suffered a fractured ankle and broken tibia on the play.

Brad on Hayward: "I really feel for him." Said it's a dislocated ankle and fractured tibia. He's being flown to Boston for further tests. pic.twitter.com/BYoMhM6MpZ

The stunned crowd stood in silence as both teams huddled up. Hayward was carted off the floor with his leg in an air cast. While the Celtics will need to conduct a series of medical tests, it would be surprising if he returns this season.

Here’s a look at the Cavs crowd giving Hayward a standing ovation as he was carted off the floor.

Gordon Hayward gets standing ovation by Cavs crowd has he gets stretchered off the court pic.twitter.com/iOhrtb7tzV

Many Cavs and Celtics players understandably reacted emotionally after seeing the injury.

These reactions to Gordon Hayward's injury tell you everything you need to know. pic.twitter.com/F3YzpUy03B

Kyrie Irving and Marcus Smart embraced in the Celtics huddle moments after Hayward was carted off the court.

The injury occurred in front of the Cavs’ bench, and the video footage of the players’ reactions shows the severity of the situation.

Do not watch the Gordon Hayward injury, all you need to do is watch the Cavs bench reaction, even that will make you queasy #BOSvsCLE pic.twitter.com/MMU3Oz6eyn

The NBA’s opening night is typically a festive event, but the Cleveland crowd was eerily silent during the game after Hayward sustained the injury.

Hayward spent his entire career with the Utah Jazz prior to signing with the Celtics this summer. Boston signing Hayward was considered one of the biggest NBA moves of the off-season. Hayward had two points and a rebound in the game prior to the injury. 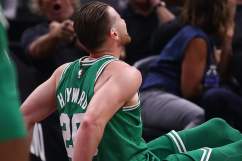