The 2017 football season has begun and some NFL players have decided to protest the National Anthem.

This all started in 2016 when Colin Kaepernick decided to kneel during the National Anthem to show that he’s against police brutality. He started by sitting on the bench and basically ignoring the song, but then decided to just kneel on one knee on the sideline as a way to still respect the military.

“I am not going to stand up to show pride in a flag for a country that oppresses black people, and people of color. To me, this is bigger than football, and it would be selfish on my part to look the other way. There are bodies in the street, and people getting paid leave, and getting away with murder,” Kaepernick said in a press conference last year.

Kaepernick’s controversial protest has been debated for months and this season, more NFL players have decided to take a stand against oppression by getting down on one knee while the National Anthem is performed before games.

President Trump recently weighed in on the protests and he has called out the NFL on numerous occasions.

“Wouldn’t you love to see one of these NFL owners, when somebody disrespects our flag, to say, ‘Get that son of a b**** off the field right now, out, he’s fired. He’s fired.’ You know, some owner is going to do that. He’s going to say, ‘That guy that disrespects our flag, he’s fired.’ And that owner, they don’t know it [but] they’ll be the most popular person in this country,” Trump said during a rally in Alabama.

Trump’s comments only made more NFL players take part in the anthem protests, causing several to take a knee in football games across the nation over the past week. Now, some teams lock arms during the anthem as a way to protest. Other players have chosen to take a knee while the anthem is sung. Last week, the Dallas Cowboys along with the team’s owner Jerry Jones all got down on one knee before the anthem, but stood when it started.

The United States of America is unsurprisingly at a divide when it comes to this protest. Some believe that it’s perfectly acceptable while others think that it’s a complete disgrace because these men are disrespecting the flag, the military, and the country.

Below are some of the best memes in support of and agains the controversy.

To right wingers, there is never a 'right' way for a black person to protest in America. #TakeAKnee pic.twitter.com/Byv7wbRgje

Fans who boycotted the NFL checking in on their teams like… pic.twitter.com/MjA0QskuND

Back when the president didn't mind if you took a knee… pic.twitter.com/nQCtanmsmN

Stand if your quarterback is elite. pic.twitter.com/dh17LJPyWY

Ok… Then lets just take that "knee" away from them… This meme has the radicals really pissed off! #BoycottNFL #BlueLivesMatter #MAGA pic.twitter.com/wOQOUvUnYz

By popular demand, I repost this with #hashtag #TakeAKnee #TakeTheKnee, #NFL @NFL and #BoycottNFL

Stealing my #MEME is approved! pic.twitter.com/uhWmpwMchr 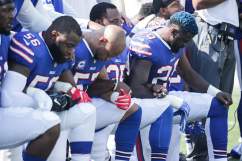