Just when you thought the hype for Penn State junior running back Saquon Barkley couldn’t get any higher, he does the unthinkable. At the start of the biggest Big Ten Conference game of the year, Barkley found space and made the opposing team pay for it in an instant.

No. 2 Penn State was visiting No. 6 Ohio State on Saturday, and Barkley silenced the OSU crowd at The Horseshoe after he sprinted past defenders on the opening kickoff, taking it all the way to the end zone and giving his team an early 7-0 lead after the extra point. Gus Johnson calling the play on FOX made the scene even better.

Watch a video of the play below:

Barkley’s return made it 15-straight games that he’s scored a touchdown in, and Penn State added onto its lead on its next offensive possession to move ahead 14-0 less than five minutes into the game.

The Nittany Lions are 7-0 thus far this season and have been led by the consistent play of Barkley, who entered Saturday’s game with 1,478 all-purpose yards. Sports Illustrated wrote that he’s “broken away from the pack as the clear favorite” to win the Heisman, as his odds, according to OddsShark.com, sit at -275 to win.

In a game earlier this season against Indiana, Barkley started things with a 98-yard touchdown on the opening kickoff.

Coming out of Whitehall High School in Pennsylvania, Barkley was a four-star recruit. He originally committed to play at Rutgers before he changed his mind to Penn State. 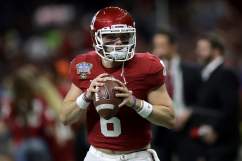