Twitter An umpire was hit by a ball during Game 2 of the World Series.

An unusual play involving an umpire ultimately cost the Los Angeles Dodgers Game 2 of the World Series on Wednesday.

With the game tied, 5-5, in the bottom of the 10th inning with two outs, Houston Astros pitcher Chris Devenski entered the game and immediately made a pick-off move toward second base, where Dodgers outfielder Enrique Hernandez was leading off. Devenski’s throw to second base to try and throw out Hernandez was errant, and would have almost certainly rolled to the outfield, allowing him to advance to third safely.

Instead, the ball pegged a leaping umpire directly in the leg. It stopped the ball’s progression to the outfield and kept Hernandez on second base. A few pitches later, Dodgers outfielder Chris Taylor flied out to center to end the inning. The speedy Hernandez would have in all likelihood gotten to third base on the bad throw, giving the Dodgers an even better chance to close out the game.

Watch the play in the video below:

The rare play put an end to a Dodgers rally which saw them score two runs to miraculously tie the game. It happened just after Hernandez tied thing with an RBI single to right field. Four batters earlier, Yasiel Puig led the inning off with a solo homer to bring the Dodgers within one run. But it was the Astros who ended up prevailing in the crazy game, 7-6, in 11 innings.

Astros outfielder George Springer smashed a two-run homer to right field during the top of the 11th to put Houston ahead for good. The Dodgers continued to battle, cutting the deficit to one run once again in the their half of the 11th on a Charlie Culberson solo homer, but Puig struck out to end the game.

The win was Houston’s first World Series victory in franchise history and evened things at one game apiece. The two teams will travel to Houston for Game 3, where first pitch is scheduled for 8:09 p.m. Eastern on Friday. 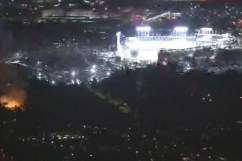 Fire Near Dodger Stadium: Watch a Helicopter Put the Blaze out