Sunday appears to be “D-Day” for some WWE superstars. The company announced that several wrestlers have been released from their contracts due to undisclosed reasons.

First, an announcement was made Sunday that Emma came to terms on a release from her contract.

“WWE has come to terms on the release of WWE Superstar Emma,” a statement said. “WWE wishes Emma the best in all of her future endeavors.”

BREAKING NEWS: WWE has come to terms on the release of WWE Superstar Emma. https://t.co/mB3phnvRjX

Emma, whose real name is Tenille Dashwood, has been troubled from the start of her WWE career. She had a successful tenure in NXT before being promoted to the main roster where she teamed with Santino Marella. But just one year later, she was sent back to NXT and debuted a different character. She found herself on the main roster again in 2016 but didn’t get much of a push by the creative team. They played numerous teasers of a new character named Emmalina for months, but plans were ultimately scrapped.

Emma’s last WWE match was against Asuka on the October 23 episode of Monday Night Raw, one day after she lost to her at the Tables, Ladders and Chairs pay-per-view.

There hasn’t been much word on what led to her release, Pro Wrestling Sheet’s Ryan Satin reported.

Emma tweeted an emoji hours after the news of her release surfaced.

A short while after Emma’s release was announced, WWE revealed that Darren Young and Summer Rae had also been released from their contracts.

WWE also wished Young and Summer Rae the best on their “future endeavors” in a statement.

Young made his WWE debut in 2010 on NXT and had former WWE superstar CM Punk as his “mentor.” He was part of the Nexus stable and eventually teamed with Titus O’Neil to form the Primetime Players. After the team ran its course, WWE paired Young with legendary wrestler Bob Backlund in a gimmick that wanted to “Make Darren Young Great Again.” However, Young suffered an injury earlier this year and plans for whatever creative push he would have were halted.

Pro Wrestling Sheet reported that Young was cleared for action in August but didn’t see much TV time afterward.

Summer Rae made her WWE debut in 2013 as one Fandango‘s dance partner and appeared in the 2015 film Marine 4. She was also used in a storyline involving Rusev and Lana, but plans were scrapped when the couple’s real-life engagement was reported by TMZ. She suffered an injury in 2016 and never appeared on TV again.

There has been no word on exactly what led to Young and Summer Rae’s release. 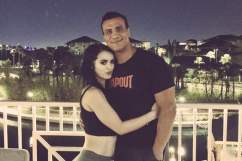