Cheri Kempf was only nine years old when she realized softball was more than a recreational outlet — she wanted to play on the highest level.

However, Kempf didn’t dream of playing in a professional league. That notion may seem strange for nine-year-old softball players in 2017. However, a professional softball league didn’t exist until 1997.

Kempf never had the opportunity to play professionally, but she has worked countless hours to ensure that the dream of playing professional softball only continues to grow. Since 2007, she has served as commissioner of the National Pro Fastpitch — the only professional women’s softball league in the United States.

Kempf joins us in this week’s Ball Like a Girl podcast to discuss her journey to becoming a leading figure in the development of women’s softball. In this interview, Kempf delves into a variety of topics, including the lack of media coverage surrounding women’s team sports, how she helped to secure the largest TV deal in the history of professional softball and what it takes to be a woman in sports management.

A new Ball Like a Girl episode will go live every Wednesday, featuring an in-depth conversation with an influential woman in the sports world.

Kempf has seen the game of softball from all angles.

As a player, she helped Team USA earn a gold medal in the 1992 World Cup in Beijing. As an instructor, she founded the largest women’s fast pitch training facility. As a television analyst, she’s become a prominent voice — appearing on national networks, including ESPN, Fox Sports, and MLB Network.

As NPF commissioner, her goal is sustainable growth for the game.

Over the past three years, the league has expanded, attendance has increased and for the first time in the history of an American professional sports franchise, an affiliate team from outside the contiguous United States, participated in regular season competition.

There’s a lot to celebrate, but as Kempf admits, there’s still a lot of work to be done.

Ball Like a Girl: Women’s sports teams have long been overlooked in media coverage– what kind of pushback did you experience when approaching television networks about putting softball on primetime television?

Kempf: Well, here’s the thing — the frustrating part about it is that softball is wildly successful. So, I’m not pitching something that doesn’t have data to back it up. The data behind college softball is tremendously impressive — the women’s college world series, sometimes, based on whatever year you’re looking at, has been as high as the third-highest rated championship, only behind football and men’s basketball. It typically outrates a lot of the regular, day-to-day programming, whether that’s MLB, NHL, or NCAA baseball. Softball has this proven track record, that’s the frustrating part, but the other part — you’ve hit it on the head — there’s not a big presence specifically for women’s team sports on television. So, you have to have someone who has vision and who has guts to say, you know, we’re going to do this, this is something that’s important and this is something that does well and we’re going to go both feet in and we’re going to carry this on a large-scale and we’re going to promote it and going to support it. And I think anyone who does that — again, you can reference back to college softball — you have a high potential for success. But it is new and it is different and it is women and it just hasn’t been done yet– so it is going to take a unique individual to say, we’re in.

BLAG: Do yo think you’ve been that individual in that conversation?

Kempf: I’m the individual who 100 percent believes in it and scratches my head to say, why is this so hard to see? You know, I often point back to Major League Baseball — there was just one guy named Branch Rickey — just one guy in all of Major League Baseball that said, I think black men should be in with us and I think they can compete and I think this will work, and he was criticized for that. He’s the guy who signed Jackie Robinson. He was met with a combative audience that said, what in the world is happening here, what are you doing? So, when you look back at that, history tells us that anything new and different — how absurd does that seem right now? That black men were not among the ranks of Major League Baseball players. But at that time it hadn’t been done and it took a unique individual, and a strong individual to not only make the decision, but to stand behind it.

I think we’re at the same place. I say all the time, every day what I learn, what’s rare in business is vision and guts — the combination between those two. Women need somebody who has that.

BLAG: As you mentioned, it’s not just in softball, this is an issue affecting all women’s team sports. Have you had conversations with other leaders in professional leagues about these issues?

Kempf: Yes, it’s a conversation I have all the time and it’s amazing that so many people don’t realize it until you say it. And then they’re like, “Oh, yes, that’s right — there aren’t professional team sport options available.”

Last year, A&E took a very aggressive position with women’s soccer. They went out and went to the women’s soccer league and they ended up taking an equity position in the league. They purchased inventory, they’re airing the soccer league, they are producing those games, they’re using all of their assets in public relations, broadcasting…everything to promote that league and I think that was an aggressive position, a brave position to take and make that move.

BLAG: What advice would you give to a woman who wants be involved in some capacity in the sports industry?

I would tell anybody, anytime, that has a target to immerse yourself in it one way or another. I can tell you that when I owned the largest fastpitch training facility in the world, I cleaned the bathrooms and that wasn’t a glamorous job and I picked trash up out of the parking lot. You can take it all the way to broadcasting, you know, I did games for nothing. I did games that cost me money to do them so that I could get experience on the air. And in the NPF, a lot of times, I’m the odd man out in the room, I say it as a joke, but it’s uphill, backwards in a snowstorm, often. But you have to be committed, you have to put your head down, you have to believe in what you’re doing. 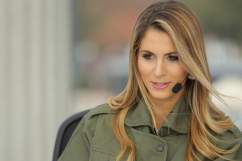 ‘Saturdays Are for the Girls — and the Boys’: Laura Rutledge Joins the Ball Like a Girl Podcast