On Sunday afternoon, the New England Patriots met the Buffalo Bills in a game that started off a bit frustrating, to say the least. After one play, quarterback Tom Brady was spotted exchanging some words with Patriots offensive coordinator Josh McDaniels.

In an interview after the game, Brady explained that his interaction with McDaniels was “just football.” For the most part, people were okay leaving it at that. However, there were some people who were quick to point out that other players in the league wouldn’t have gotten off so easily had they flipped out on one of their coaches.

The one player in particular who came to mind? Odell Beckham Jr.

Beckham Jr. has taken to Twitter to express his feelings on the matter. He was quick to point out that he feels as though there is a double standard in the league, which was highlighted following Brady’s outburst.

It’s “passion” bro. Imagine if @OBJ_3 showed some of this “passion” towards any of his coaches… Smh #DoubleStandard https://t.co/FFocdQG0U9

“Or…immaturity, or ‘needs to grow up’ or ‘selfish’ or… umm what else is it exactly that ‘they’ say…. or ‘umcomposed’ (sic) no bro, I’ve watched that man do that exact same thing for years. Beat every time I cheered for in the super bowls,” Beckham Jr. added.

Over the years, Beckham Jr. has been criticized for his actions both on and off the field. He has been called “immature” from time to time, and has often found himself fighting back against critics for his “attitude” or his “negativity.” However, he says that he simply has the same “passion” as Tom Brady. In fact, Beckham Jr. went on to say that he looks up to Brady.

“I learned from him. This is the . So I’m following his lead, I just may not know how to express it the same way. But don’t get it confused , how 12 feels about the game, I would have a hard time sayin’ that’s not EXACTLY how I feel. #GoatChasin,” he tweeted.

Other football fans chimed in, one comparing Rob Gronkowski’s late hit during Sunday’s game to Beckham Jr.’s cross with Josh Norman. Take a look at that tweet below.

Got a really good example today actually. Gronk did yesterday pretty much what @OBJ_3 did to Josh Norman. According to @espngolic "gronk let his emotions get the best of him, which happens to all of us." Press wanted Beckham thrown out of the league.

Beckham Jr.’s tweets got a few responses from the Twitter user who initially engaged him on the topic. However, one in particular got quite a bit of attention.

yo @OBJ_3, I get it now bro.. I knew you had haters, but I didn’t realize how bad it was til they all flooded my mentions ??‍♂️. Unbelievable.. keep being great, bro. #BlessUp

Beckham Jr. responded to this tweet, going on to say that he’s been getting messages nonstop about his comments on the matter.

Lol bro u have no idea what u started . Now u got all these critics with no credibility mentioning me to try to gain some likes or attention for what? Lol to talk about what we already knew. Some things better left unsaid. Im not phased. Workin on the best me on this return !! https://t.co/xY66rBeM7s

And, just a short while ago, Beckham Jr. posted the following tweet, asking people to stop tweeting him.

Stop wastin ur time tweetin me today. Negativity im blind to it. I can’t see that . The amount of time and energy some of these people use to compose a tweet, u could be doin something bettter in this world. 24 hours in a day. And every second matters

About 30 minutes later, he followed that tweet up with a quote from rapper, Drake.

“Without a response from me, u really fail to exist…” @Drake

Over the past 12 hours or so, there have been several responses to Beckham Jr.’s take on the whole thing. While many agree with him, others disagree. Unsurprisingly, Boston-centric news outlets have defended Brady’s actions.

“If that passion takes the form of a sideline outburst (of which Beckham has had quite a few), it shouldn’t necessarily be viewed as a sign of immaturity or disrespect toward teammates or coaches,” wrote NESN’s Darren Hartwell, for example. 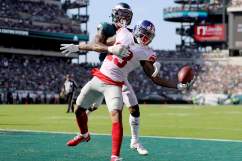