A few weeks ago, Laura Rutledge posted a photo on Instagram with the caption, “Saturdays are for the girls AND the boys.”

The photo was of Rutledge working on the set of SEC Nation alongside analysts Tim Tebow, Marcus Spears and Paul Finebaum. Rutledge, who is the host of SEC Nation on SEC Network and a reporter on ESPN, received both praise and criticism from followers in response to the caption.

Rutledge’s post came in the wake of ESPN’s decision to cut ties with Barstool Sports after a 10-day-old partnership in late October. Her caption was a pointed reference to the controversial media outlet’s motto: “Saturdays are for the boys.”

Rutledge joins us in this week’s Ball Like a Girl podcast, to share her thoughts on ESPN’s dissolved partnership with Barstool Sports, offer a behind-the-scenes glimpse into SEC Nation, and discuss how she responds to negative viewers.

A new Ball Like a Girl episode will go live every Wednesday, featuring an in-depth conversation with a prominent woman in the sports world. Upcoming guests include National Pro Fastpitch softball commissioner Cheri Kempf and NFL Network’s Aditi Kinkhabwala. Our first episode featured Nicole Auerbach, who is a senior writer with The Athletic.

Rutledge began working at ESPN as a reporter on SEC Network in 2014 and has since, logged thousands of miles traveling for college football games — she estimates she’s sidelined at least 150.

As the host of SEC Network’s traveling pregame show, Rutledge pours countless hours of preparation into the broadcast and often averages less than four hours of sleep before her 6:15 a.m. wakeup call every Saturday morning.

What follows is an abbreviated version of our conversation with Rutledge who delves into what a typical Saturday entails during college football season. You can listen to the full interview at the bottom of this post, or on iTunes. If you like what you hear, subscribe on iTunes, leave a review, and tell your friends. You can also follow Ball Like a Girl on Facebook, Twitter, or Instagram.

Ball Like a Girl: As the only woman with a seat at the SEC Nation table, what type of perspective do you hope to bring to the discussion that might be different than the guys you’re sitting around?

Rutledge: The thing that I hope to do and hope to convey every time is that, “hey, we know what we’re talking about too.”

You know, it’s interesting because in my role I’m not up there to be an analyst necessarily, but I do have an opportunity to occasionally add in some points or set people up a certain way or ask a question that would sort of show my opinion and then get theirs and I think that’s been something that’s been important to me this year.

We started doing these things — they’re called OTS’s, but basically, it’s me by myself leading into something and that’s been a unique opportunity for me to sort of put some of my opinion into things and I appreciate our producers and our coordinating producers, who are even above them, for allowing me to do that. And it’s one of those things where I think you have to earn it a little bit and that would be true for men too, I think that’s true for everybody in this business.

Earning it and showing that, yes — I do have an opinion and I’ve researched it and I’ve spent time with a lot of these coaches and players that we would be talking about and have good perspective. You just have to keep showing that and keep proving it, and they will give you opportunities. That’s one thing I’ve found on this show.

To me, if there’s any little girl that’s watching that feels like she’s more empowered because she sees a woman up there then that’s the best thing that could happen and that makes it all so worth it for me.

BLAG: As you know, the SEC is known for its passionate fan base — there’s so much tradition and so much pride, which can be an amazing thing, but in some cases, we see that passion leading to criticism and as you just mentioned, less than desirable comments. I know that you’ve dealt with your share of unfair comments on social media and even some callers on the Paul Finebaum show. Can you take us through some of those experiences and how you’ve decided to approach them?

Rutledge: Well, that was just worded so well, what you said, because it is the passion that leads to it and if you think about “fan” it’s short for the word “fanatic.” And sometimes, we do see some fanatical behavior. It’s funny because I love that and that’s why I do this, but I will say, this year especially has been hard at times because, when you’re averaging four hours of sleep a week and you’re traveling all over the place and you are working so hard to bring fans information and the pictures and the behind-the-scenes looks and all the little details we can bring because we have access to it and that’s our job, it’s disappointing when they don’t appreciate that.

But one thing that I had to get over very early on was really caring about it because if you start caring about what some of these people say, then it’s just not going to work.

In particular, you brought up the callers on the Paul Finebaum show and that’s been interesting because a lot of times these criticisms will come on social media so you can take a deep breath and walk away from it, or maybe think of a response that would be witty or clever and you have time, but when somebody is calling you and you are live on TV, and you are expected in that moment to defend everything about you and basically defend the fact that you’re a woman, that was something that I was not necessarily prepared for.

I think the way to approach it is to be as prepared as possible, but also to be as kind as possible because if somebody’s coming at you that way, they have problems potentially in their lives.

BLAG: I’m sure there’s a lot that you’ve learned working alongside Paul Finebaum — someone who has such esteem and so many experiences in the industry — but is there a particular piece of advice that he’s given you or just an experience together that really made an impact on you?

Rutledge: I think one of Paul’s pieces of advice, and we kind of talked about this earlier, he’s somebody who gets a ton of haters, I mean — he’s very polarizing, people either love him or hate him. But he’s sort of fascinating to everybody so, he’s been somebody that will tell me a lot of times, don’t respond to people or don’t let that affect you — you know, don’t look at this, don’t look at that.

And he’s been a great sort of barometer for all of that. He’s very even-keeled, he doesn’t let anything affect him so, I think I’ve learned a lot from him just watching him deal with that. 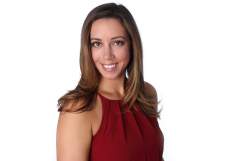 Life as a Young, Female College Sports Writer: The Athletic’s Nicole Auerbach Joins the Ball Like a Girl Podcast