Now that 2017 is close to wrapping up, WWE is giving its final PPV honors to the Blue Brand.

Clash of Champions is that special event and its match card is pretty solid. Jinder Mahal has invoked his rematch clause and will take on AJ Styles in a main event that’s all about the WWE Championship. As for the United States Championship, that title will be contended between three men – the title holder Baron Corbin and his two challengers, Bobby Roode and Dolph Ziggler. Then there’s the SD Women’s Championship matchup between Charlotte and Natalya (in a Lumberjack Match!) and the Fatal 4-Way contest for the SD Tag Team Championship. Non-title matches are also planned for this December wrestling extravaganza.

If you’re looking to find out all the winners of each bout and the actual highlights of them all, you’ve come to the right place! 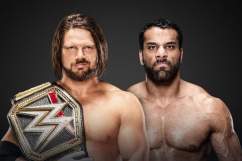 When Is WWE Clash of Champions 2017? Date, Location & Start Time 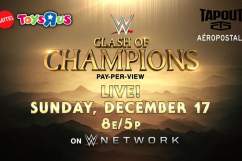 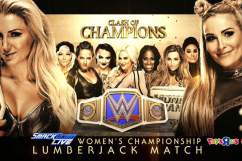 Highlights: Ryder leaped at Mojo with a dropkick and then proceeded to clothesline him over the top rope. A brawl broke out on the outside between both men for a bit before Ryder hopped back in the ring. He delivered a Baseball Slide to Mojo to do some more damage, but the tide turned once Mojo took Ryder to the matt with a Spinebuster back inside the ring. Mojo remained in control for a few moments, but Ryder eventually made a slight comeback. He used his knees to block a running strike from Mojo and ascended to the top rope, but Mojo shoved him off before he could transition into his next move. On the outside, Mojo ran full speed and ended up shoulder blocking Ryder into the crowd barrier.

As the match wore on, Mojo stayed in control of his former tag team partner. Ryder tried another attempt at making a comeback, but Mojo cut that off by landing a big boot on him. Mojo verbally assaulted Ryder afterwards, which led to Ryder slapping the big man and finally making an offensive comeback. Ryder smashed Mojo with several strikes and more of his signature offense. Mojo soon caught Ryder off guard by clipping his leg and then finishing him off with a stiff running forearm strike.

Breezango (Fandango and Tyler Breeze) vs. The Bludgeon Brothers (Harper and Rowan)

Highlights: Harper quickly took Breeze to the mat. Rowan got the quick tag and targeted Breeze for more offense, but Fandango and Breeze shook them off with their swift counters. This sprint didn’t last too long, however. Harper and Rowan were soon destroyed by a bum rush of offense. Breeze got planted face first onto the ring apron, then Fandango ate a Sitdown Powerbomb from Harper. Afterwards, Fandango faced his end after enduring the Bludgeon Brothers finisher. Both Harper and Rowan then spoke to the live crowd and made it clear that more victims will lie in their wake.

Highlights: Both special guest referees came out to begin the match festivities. Once both teams entered the ring, the Canadian duo got into it with Shane before they were forced to get the match started. Orton and Zayn decided to start things off. The first pin attempt led to both ref’s counting, but they were clearly not in sync. This confusion threw both teams off, but they eventually got back into the bout. Nakamura eventually entered the ring to lock up with Zayn. Zayn controlled his arm for a bit before Nakamura spun out of his hold and got control of Zayn’s arm. Owens then got tagged in and struck Nakamura with repeated strikes. Nakamura soon got the better of Owens, which led to another mistimed count from both referees. Orton then made his way into the ring to continue beating down on Owens, which led to another strange moment of Shane and Daniel not working together properly. Both men soon agreed to make their pin counting better.

After the referee situation got fixed, Owens ran in to Superkick Orton and help Zayn get the advantage on “The Viper.” While Owens and Zayn continued beating down on Orton, Owens made it clear to Daniel that he was none too pleased with Shane’s referee work. Orton seemed to be in dire straits until he planted Zayn stomach first onto the ring ropes. Before Orton could tag in his partner, Owens stopped him with strikes and his Senton Splash. Orton then found himself back in trouble as Zayn and Owens continued to give him no breathing room. Soon after though, Orton landed a back suplex on Zayn and got the hot tag to Nakamura. Nakamura then entered the ring and did tons of damage to Owens with comeback offense. Nakamura even clocked Zayn one time and knocked him from the ring apron.

Nakamura remained in control over Owens for several moments and even locked him into a Triangle Chokehold. A moment of confusion ensued when Daniel began counting the pin on Nakamura since his shoulders were down, which led to Shane yelling at him about the submission hold still being locked in. Soon after, the match began breaking down as all four men began brawling in the ring. Owens and Zayn used some tandem offense to weaken Nakamura, which forced Orton to run in and aid his partner. Once Orton got the official hot tag from Nakamura, he laid into Zayn with his signature comeback moveset. Zayn soon found himself on the top rope with Orton. Their top rope scuffle ended when Orton landed a Superplex on Zayn. Afterwards, Owens pulled Orton to the outside. Nakamura followed Owens and began assaulting him while the two referees tried to regain some semblance of control.

On the outside, Owens and Zayn began clobbering Nakamura. Moments later, Nakamura ended up going through one of the announce tables via a Bullfrog Splash from Owens. Daniel and Shane found themselves confused as to what to do about this development all the while. Back in the ring, Orton laid into Zayn with a Snap Powerslam and his rope assisted DDT. Orton then landed his RKO to Zayn and almost got counted out by Shane. The pin then got broken up after Owens shoved Daniel right onto Shane, who got up in a rage as he jaw jacked with Daniel. Orton then RKO’d Owens and re-focused his attention on Daniel. Afterwards, Orton and Zayn got into a pinning exchange that forced both referees to constantly keep counting. At one point, Shane blatantly stopped counting in favor of Zayn. Daniel began screaming in Shane’s face, who turned his back on his co-partner. The sudden ending then came once Daniel made a fast count in favor of Zayn rolling up Orton.