Tom Brady has missed a couple of practices this week due to an injury on his throwing (right) hand. The New England Patriots quarterback is hoping to start in Sunday’s game against the Jacksonville Jaguars, but he has been sidelined following the injury that he sustained during Wednesday’s practice.

Football fans all over the country have been wondering what’s going on with Brady’s hand and if his injury will keep him from playing in the biggest game of the year; if the Patriots pull off a win in Foxborough on Sunday, they will be headed to the Super Bowl.

1. His Hand Was ‘Gushing Blood’ at Practice on Wednesday & He Needed Stitches

Brady showed up at practice on Wednesday, January 17, for what he thought would be a pretty routine day. He was prepared to run plays with his team before heading inside for a press conference. However, Brady ended up leaving practice early to meet with team doctors — and he was unable to speak with the media.

During practice, Brady ended up colliding with running back Rex Burkhead, his hand coming into contact with Burkhead’s helmet, causing a laceration.

NFL Network Insider Ian Rapoport said that Brady left practice with blood “gushing” from his hand. Brady met with team doctors and ended up needing four stitches near his knuckle, this according to Boston sports radio talkshow host, Mike Felger.

“No fracture. No ligament. Just a cut from hitting the buckle on someone’s helmet. Four stitches around the knuckle, should not affect him,” Felger said, according to James Stewart, the executive producer of Felger and Mazz.

Brady ended up missing practice on Thursday and again on Friday.

Although Brady missed Wednesday’s scheduled press conference, he was available to speak with the media on Thursday. Unsurprisingly, his hand injury was a topic of a lot of questions — but those were questions that Brady didn’t want to answer.

After taking a few questions about the upcoming playoff game, one reporter decided to sneak in another question about Brady’s hand — but he didn’t fall for it.

“What exactly happened on Wednesday?” the reporter asked.

“I’m not talking about it,” Brady responded.

3. He Is Listed as ‘Questionable’ for Sunday’s Playoff Game Against the Jacksonville Jaguars

Brady is currently listed as “questionable” for Sunday’s game, according to NFL.com.

“Is there anything you can share about the next couple of days that will determine your status between now and kickoff?” a reporter asked Brady at the aforementioned press conference.

“I have no idea,” Brady responded with a laugh.

A short while later, the focus switched to the Patriots’ backup quarterback, Brian Hoyer. Brady was asked if he had been working with Hoyer “to prepare for the possibility [he] might not play?”

“We’re in the same meetings every day. We’re sitting right next to each other. So whatever I’m hearing or saying, he’s hearing the same thing,” Brady responded.

“Have you played in a game in more pain than you’re in right now?” Brady was asked next.

“I’ve played in a lot of games in pain, so,” Brady responded.

“Have you ever played a game in gloves?” was the next question.

On Saturday, January 20, Brady posted a hype video to his Instagram account, suggesting that he’s ready for Sunday’s game. The Patriots have not confirmed whether or not Brady will start, however. You can check out the video that Brady posted below.

4. Al Michaels Believes the Patriots Can Win Without Brady

Brady’s hand injury has been the talk of the league for days, so it’s not surprising that TMZ asked Al Michaels about Sunday’s game when their crew caught up with him at Madeo Restaurant in West Hollywood on Friday night.

5. His Injury Has Become a Meme

While Al Michaels believes that New England can win without Brady, it seems like Patriots fans aren’t too worried either way. In fact, the injury has become a meme.

As you can see, the image appears to be an x-ray scan of a human hand. The hand in question seems to be adorned with a ring on each finger, rings that look suspiciously like Super Bowl rings.

The police department, which serves a Massachusetts town of nearly 20,000 — most of which are surely Patriots fans — captioned the image as follows.

“We don’t usually release medical information as part of our investigations, but we feel the public interest outweighs the privacy concerns on this one. After an extensive investigation into potential injuries to an unnamed quarterback’s hand, we obtained this X-Ray depicting abnormal growths on all five fingers. The growths are believed to be heavily encrusted with diamond like stones and appear to have significant weight to them. Unfortunately for this quarterback, it appears these growths may be spreading to his other hand. Please keep him in your thoughts this Sunday.” 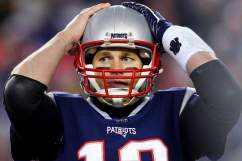