As Olympic freestyle skier Gus Kenworthy takes to the slopes in the 2018 Winter Olympics in PyeongChang, South Korea, his boyfriend, Matthew Wilkas, will be on-hand to cheer him on.

Kenworthy, 26, who took home a silver medal in Sochi in 2014, is set to compete in both slope-style and half-pipe skiing. According to Time Magazine, Kenworthy is “the first openly gay male athlete to ever compete at the Winter Games.” This is something that is adding to the pressure for the athlete, even if he does think it’s “f*cking cool.”

“He’s not necessarily able to let loose and have as much fun as he used to. He’s moodier. He grinds his teeth at night. I can wake up and hear it. I have to nudge him,” Maine-native Wilkas, 39, told Time. He has been dating Kenworthy since 2015.

Kenworthy had been dating photographer Robin Macdonald, but things weren’t going that great. In an interview with Out Magazine, Kenworthy revealed that he messaged Wilkas on Instagram — while he was still dating Macdonald — and the two started talking.

“Gus reached out to me on Instagram, and he was very sweet. I think he said he really liked my sense of humor and thought I was funny, and I thought, Who is this guy? I didn’t know what free-skiing was. I’d just come out of a relationship and was going to therapy and wasn’t really in the right place, so when he asked me out, essentially on a date, via Instagram, I couldn’t do it,” Wilkas told Out Magazine back in 2016.

Kenworthy recalled the first contact, telling Out that he asked Wilkas to go out for coffee, however Wilkas never followed through. A year passed and Kenworthy decided to reach out to Wilkas again. This time, Wilkas joined Kenworthy for drinks on his birthday.

The two ended up hitting it off, bonding over blueberry mojitos, and the rest was pretty much history.

2. Kenworthy & Wilkas Are ‘In Love’ But ‘Not Getting Married’

"But we're the greatest. They'll hang us in the Louvre. Down the back, but who cares, still the Louvre"… Happy birthday, Gus!!!! I love you so and I'm so glad we met TWO YEARS AGO TODAY?!?!?! WHHHHAAAAAT???? ?@lukefontana

Kenworthy and Wilkas’ relationship took off rather quickly. The two kissed on the night of their first date and hooked up for the first time the very next day. That same weekend, Wilkas met Kenworthy’s mother — a step that usually doesn’t happen until two people have been dating for a few months.

Although Kenworthy and Wilkas are in a serious relationship, the two aren’t planning on tying the knot. At least, that was how they felt in 2016.

“He lives in New York — he can’t really live in Denver. Also, I was in a relationship from 18 to 23, and I still haven’t really experienced that much sexually. I wouldn’t want to ever sacrifice my relationship with Matt just to go out and get that out of my system, but we’ve also talked about that and he doesn’t want to deprive me of experiencing anything while I’m still young. I don’t necessarily know what that means. We’re not in an open relationship and we’re not breaking up. But we’re also not getting married,” Kenworthy told Out Magazine.

According to some pretty reputable buzzfeed articles and also Kylie Jenner, "fingermouthing" is the new "duck face". Photo by @briankaminski

Wilkas told Out Magazine that he never really felt like he fit in. He said that people constantly made comments about him being gay, adding that he had “all the clichés of a young gay child.” Not only was Wilkas very creative when he was young, but he was also “obsessed with old movie musicals.” One of his favorites? Carousel.

His dad passed away when he was just 12 years old. Around this time, he started to really come into his own.

“I started to do theater after my father died, and it just fit. People started to see my talent rather than all my flaws, and I grew happier and found my group. My mother was very religious, but she was very loving and didn’t care that I wasn’t like the rest of the boys. With theater I felt I’d found someplace I belonged,” Wilkas told Out Magazine.

4. He’s an Actor, Best Known for His Role in Gayby

Another pic from the wildly talented @briankaminski ❤️

Wilkas put all of that theater experience to good use and became an actor. He started with fairly small roles in the 2000’s, starring in a couple of television shows like Hope & Faith and Ugly Betty.

In 2010, Wilkas landed a role in Gayby. The 11-minute comedy short tells the story of a gay man (played by Wilkas) and a straight woman (played by actress Jenn Harris) who decide to have a child together. Two years later, Gayby was made into a full-length feature film.

You can watch the trailer for the film below.

Since then, Wilkas has over a dozen credits to his name. He has starred in various films and television series, and even tried his hand at writing. According to his IMDb page, he co-wrote six episodes of a television series called New York Is Dead. He is also listed as the show’s executive producer and co-producer.

A Kickstarter campaign raised over $30,000 to get the show off the ground. All six episodes aired on Funny or Die.

5. He’s Working on a YouTube Show With Daniel Vincent Gordh

@manboynice and i love each other very much. But only in a platonic, brotherly way as depicted in this photograph. Stay tuned tho, cuz coming in 2018 we will be debuting our very own YouTube sketch channel called “Matt and Dan”!!! IT’S GOING TO BE LIT.

Wilkas and his pal, Daniel Vincent Gordh, have been working on their very own YouTube channel that will be called “Matt and Dan.” Not too many details are known about what the guys plan to post, but they both seem super excited about what’s to come.

“As depicted above, my non-sexual life partner @mwilkas and I are busy getting ready for our new, very comfortable, sketch comedy channel on YouTube. Stay tuned for Matt & Dan – Season 1 is coming in 2018,” Gordh posted on Instagram last month.

Wilkas currently has a YouTube channel, but he has only posted a handful of videos and he doesn’t have much of a following. You can check out one of his videos below. 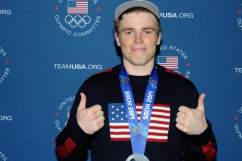