Instagram/jaytrain It's been a tumultuous season for the Eagles running back, but the support of his family has never wavered.

He’s been a big-time spark for the Eagles this season, but Jay Ajayi’s football story is far from usual.

The former Boise State star didn’t arrive in America until he was seven years old, spent most of his adolescence playing soccer and struggled to find his footing once he reached the NFL. Now, however, just one win away from a Super Bowl championship, Ajayi has got his sights set on rushing yards and the end zone, determined to do his brand-new team proud.

And, of course, the family that’s stood by his side every step of the way. Here’s everything you need to know: 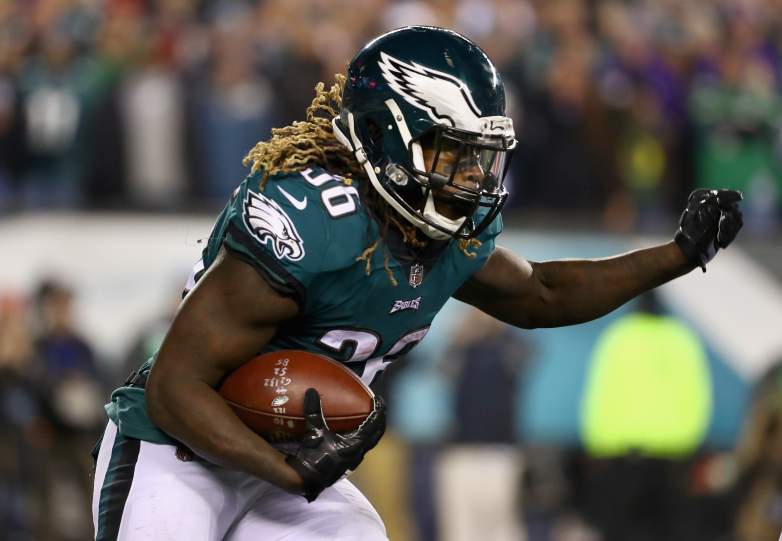 Ajayi – whose parents are of Nigerian descent – spent the first seven years of his life in England, living in Manor House and Essex before he and his parents moved to Texas in 2000. It was a change that helped shape his entire life, particularly when he realized he’d found a brand-new home in America. He told The Guardian:

I remember losing my accent. At the time I was a kid and getting a little bit of fun poked at me because I was different. So my voice, I just kind of blended it into whatever it is now, where it’s British, American, Texan all in one. My mum’s accent is still very strong, so I’m always like: ‘dang, I wonder what it would be like if I had mine.’

Although he’s quick to point out that he’s lived stateside for more than half his life now, Ajayi still has a particular tie to England and relished the opportunity to compete there when the Dolphins took on the Saints at Wembly Stadium in September, 2017.

“I won’t lie, it’s a special game for me,” Ajayi told media prior to the game. “This is an opportunity of a lifetime to certain people. And so I definitely appreciate what’s going on, and what the situation is.”

Ajayai has become the de facto face of football in England, but it wasn’t quite the return he hoped for. He recorded less than 50 yards in the Dolphins’ loss and was spotted leaving the field with tears in his eyes.

2. Ajayi’s Father Made Him Pick Between Soccer & Football

It wasn’t always just about football.

In fact, when Ajayi was growing up the future NFL star was torn between focusing on football and, the other football, soccer. While he was still living in England, Ajayi played soccer nearly every day, competing against neighborhood kids and that trend carried over even after he and his family moved to Texas. It wasn’t until his junior year of high school, when he was being run ragged from two different sports, that his father sat him down and told him to pick.

I was getting a lot of pressure from both sides to give one sport my undivided attention…It was very stressful at that time because I was trying to please a lot of people and in the end my dad told me: ‘You can be good at both of them or you can be great at one. You really need to choose which one you want to be great at.

Soccer made the most sense – Ajayi’s father, Ibi, was a licensed FIFA agent at the time and had plenty of connections to pro teams in Europe, as well as the national team in Nigeria. But Ajayi couldn’t quite shake the idea that football was where he belonged.

He turned in his shin guards for football pads and the rest, as they say, is history. Ajayi went on to play college ball at Boise State, becoming the first FBS player to rush for 1,800 yards and catch for another 500 yards in a single season.

3. He Credits His Mother for His NFL Success

Ajayi’s football career has been a bit of a roller coaster.

He was a star at Boise State, but injury concerns saw him fall down the draft ladder until the Dolphins selected him in the fifth round 2015. He struggled to find his footing his rookie season and was, essentially, benched for Arian Foster in 2016. He notched a handful of solid performances in Miami, but those same injury concerns lingered and he made his debut in Philly with a touchdown in his very first game.

It would be easy for Ajayi to find the whole thing overwhelming. He doesn’t. Why? He’s got, at least, one full-time fan – his mom.

“My mother — she always told me, ‘Stay hungry and humble’ and that’s something I kind of used as my go to throughout my whole career, just with adversity and challenges,” Ajayi told CSB Sports. “Stay humble, hungry and you always have that chip and that edge to try and chase your goal and chase your dream.”

Ajayi seems to have hit his stride with the Eagles. He rushed for 408 yards in seven regular-season games and chipped in 197 yards on 38 postseason carries.

4. Ajayi’s Mother Was Excited With His Trade to Philly

It all worked out pretty well.

The Dolphins traded Ajayi to the Eagles on October 31, 2017 – for a fourth-round draft pick – just before the NFL trade deadline expired. Miami, reportedly, sent Ajayi packing because the team was worried about knee issues stemming from a significant 2011 surgery, but Eagles GM Howie Roseman refuted the claim, telling ESPN, “I’m not concerned about any reports other than the ones given to us.”

And there was one person in particular who was especially excited with Ajayi’s trade – his mother.

Jay Ajayi said his mother has always been an #Eagles fan despite growing up in the Dallas area. Said she really liked Donovan McNabb.

Ajayi was especially excited to square off against the Cowboys after being traded to the NFC East. He grew up in Texas and, with a mom cheering for the Eagles, was well aware of just how deep that rivalry runs. He told the Eagles website in November 2017: ““This is a special one for me. I won’t lie. Growing up in Texas in my household the Cowboys were on the TV quite a bit. It’s funny my mom’s actually an Eagles fan so she was super psyched when I got here. I’ve got a lot of people that are going to be at this game.”

Football talent runs in the family.

Ajayi’s younger brother, Solomon, started his college career as linebacker at Bakersfield College in Long Beach, California before transferring to Liberty University in April, 2017. Solomon notched time in ten games during his freshman season and racked up 50 tackles.

Of course, Solomon is also a big-time fan of his brother’s.

He watches as many games as he can during the season and did his best to get to as many games as he could when Ajayi was still playing in college at Boise State. In fact, the two have a pre-game signal for each other. “It’s an unspoken brotherly thing,” Solomon told the Los Angeles Times. “We make eye contact and kind of nod our heads, because it’s like, ‘You know what you’ve got to do. It goes both ways, because every time he’s at one of my games, we make eye contact and he makes sure I know it’s time to go.”