Getty Mikaela Shiffrin has her eyes on multiple medals.

Mikaela Shiffrin headed into the 2018 Winter Olympics aiming to prove her debut 2014 performance in Sochi was not a fluke. Shiffrin is no one-hit wonder, as she followed up her 2014 gold medal in slalom with another gold in the 2018 giant slalom. Shiffrin has two gold medals, but her eye is on a few more as she heads into her final three events.

In 2014, just hours after being the youngest Olympian to ever win a gold medal in a slalom, Shiffrin was already looking to this Olympics, and casually stated she wanted to win five medals.

“Right now, I’m dreaming of the next Olympics (and) winning five gold medals, which sounds really crazy,” Shiffrin told the Boston Globe. “I’m sorry I just admitted that to you all.”

As the 2018 Olympics were set to begin, Shiffrin did little to back away from her youthful exuberance.

“I’m not going to take back what I said,” Shiffrin told Bleacher Report. “This year, if I go and race in four events, it’s because I believe I can medal in four events. Whether that happens or not, we’ll see what happens. But it’s more about giving myself that opportunity, whether it’s three events or four events. I believe in my ability, and I have a team around me that also believes in my ability, which allows me to stand behind that statement, even if it was almost ignorant in a way.”

Shiffrin will not get the opportunity to win five medals as she had to drop out of Friday’s Super-G race. Shiffrin had wanted to give the event a try, but she experienced weather delays two times in three days. The delays pushed together her events, meaning she will be competing three straight days. Her mother (and coach) Eileen Shiffrin explained to the USA Today that Mikaela needs a day of rest before continuing her Olympic run.

“She will have raced and trained – or tried to race – for six days in a row,” Eileen Shiffrin told USA Today. “She has to have a day off.”

After the February 15 slalom event, Shiffrin will get some much needed time off. She is not expected to compete again until February 21 for the downhill, and finish up her 2018 run at the alpine on February 23. This would give Shiffrin an opportunity to win four medals at the 2018 Winter Olympics. Shiffrin spoke with Yahoo Sports about her opening gold medal run in Pyeongchang.

“The Olympics is not about protecting the lead,” Shiffrin told Yahoo Sports. “It’s about putting your best on the line. You see what happens. … I was feeling the hill. I was feeling the mountain and feeling my skis. I was really letting it go as much as I could in that second run.”

Prior to winning her most recent gold medal, Shiffrin spoke with Bleacher Report on the idea of winning multiple medals.

“The image of having an opportunity to walk away from an Olympics with four gold medals, or four medals of any kind, that’s a very nice image,” Shiffrin told Bleacher Report. 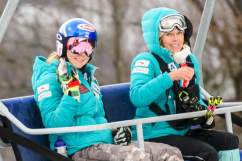