Derrius Guice is a junior at Louisiana State University. He is the school’s lead running back and has been called “the most motivated player in college football.” Expected to be a first or second round pick, Guice has drawn comparisons to Marshawn Lynch.

The 5’11”,  218-pound footballer hails from Baton Rouge, Louisiana. He attended Catholic High School before enrolling at LSU, where he studied sport administration for three years.

Guice, 20, attended the 2018 NFL Combine. During one of his interviews, he was asked a couple of questions that many feel were inappropriate.

1. He Was Asked if He Was Gay & if His Mom Was a Prostitute During the NFL Combine After Being Told to ‘Come Prepared’

Guice was part of the 2018 NFL Combine, which concluded earlier this week. During one of his interviews, he said that an NFL team asked him flat out if he was gay and if his mom was a prostitute.

“It was pretty crazy. Some people are really trying to get in your head and test your reaction. … I go in one room, and a team will ask me do I like men, just to see my reaction. I go in another room, they’ll try to bring up one of my family members or something and tell me, ‘Hey, I heard your mom sells herself. How do you feel about that?'” Guice said in an interview on the SiriusXM NFL show Late Hits.

Guice didn’t seem offended by the questions, however, and said that he was told to “come prepared.”

“It went exactly how everyone told me it would be. It’s exhausting. … It was a great experience. You’re being watched and tested the whole time,” he said.

According to NBC Sports’ Pro Football Talk, these sort of questions aren’t all that uncommon, despite the fact that the NFL has said they are “clearly inappropriate.”

“Two years ago, cornerback Eli Apple faced that question in a pre-draft interview with the Falcons. The NFL dubbed the question ‘disappointing and clearly inappropriate,’ and the league vowed to look into it. Three years before that, a team asked tight end Nick Kasa if he likes girls. The league dubbed the topic impermissible and said that persons asking such questions would be subject to discipline,” the site reports.

2. He Is Projected by Some to Be Selected in the First Round of the 2018 NFL Draft, But an Injury Could Cost Him

The Most Motivated Player In College Football | Derrius Guice LSU Highlights ᴴᴰ(Reupload) Official Derrius Guice Career Highlights #2018Draft #Like&Share [*Disclaimer* ] The Footage belongs to Stanford, Fox , ESPN The Video is Edited so it qualifies for Fair use. *Copyright Disclaimer Under Section 107 of the Copyright Act 1976, allowance is made for "fair use" for purposes such as criticism, comment, news reporting, teaching, scholarship, and…2017-12-17T21:39:40.000Z

Whether Guice’s draft stock takes a hit as a result of the above revelation remains to be seen. What is known is that some analysts have projected him to go in the first round. USA Today’s Nate Davis projected Guice to go 20th overall, selected by the Detroit Lions, in his recent mock draft.

“[Leonard] Fournette’s former backup at LSU could be just the physical presence needed by a Detroit team that has ranked 28th or worse running the ball over the past four seasons and was dead last in 2015 and ’17,” the report reads, in part.

One mock draft from CBS Sports speculated that Guice could be taken much later in the round.

“With LeGarrette Blount and Darren Sproles headed for free agency, Guice, who has drawn comparisons to Marshawn Lynch, would seem like a natural fit. Yes, Jay Ajayi and Super Bowl hero Corey Clement return (along with Wendell Smallwood) but as Blount proved in 2017, you can never have too many talented backs in a game where injuries can derail a season,” writer Ryan Wilson said.

But other analysts have dropped Guice to the second and third rounds. A “nagging injury” he suffered in 2017 limited his participation in the season, according to the Times-Picayune.

3. He’s Leaving LSU Ahead of His Senior Year After Three Seasons on the School’s Football Team

In his three seasons with LSU, Guice has put up some mixed numbers. In 2015, he had a mere 51 rush attempts, but converted 436 yards for an 8.5-yard average per rush, according to ESPN.

His longest run was good for 50 yards and he scored three touchdowns. Guice also had 5 receptions good for 20 yards.

LSU’s 2016 season was Guice’s breakout year. He carried the ball 183 times for 1,387 yards, averaging 7.6 yards per touch. According to his LSU bio, Guice’s longest run of 2016 was a 96-yard touchdown, an LSU record, against the Arkansas Razorbacks. He set the LSU record for rushing yards in a single game with 285 in the November 24 game against Texas A&M. Guice finished the season with 15 rushing touchdowns; he also had 9 receptions for 106 yards and one receiving touchdown.

Guice lost his dad, Derrick Guice, when he was only 6 years old. According to Bleacher Report, the elder Guice was “gunned down in a Dennys.”

At the time, Derrius watched the news report that showed his father’s dead body on the ground.

“You see that stuff when you’re [that young]…that takes a huge toll on you. That sticks with you forever,” he told Bleacher Report in December 2016.

Derrius’ older brother, named Derrick after their late father, was arrested in 2016, suspected of attempted murder. He was booked at Parish Prison, “as a principal to two counts of aggravated criminal damage to property and one count of principal to attempted second-degree murder, illegal use of a weapon, and simple criminal damage to property,” according to The Advocate.

“Two cars, including a Nissan driven by Guice, passed in front of the residence two times at about 9:50 a.m. Thursday, and on the third time the two shooters jumped out of the car after it stopped and began firing their guns. Bullets did hit the Nebraska Street house, where another person was inside. In addition, an unoccupied car was hit by gunfire… After the shooting ended, the two shooters jumped back into the car and Guice – who did not get out of the car while the shooting took place – drove away, police reported.”

Derrick Guice, Jr. was released on bond. According to WAFB 9, he was arrested again in November on unrelated charges.

“Guice was booked on charges of resisting an officer, possession of stolen firearm, and possession of marijuana,” the site reported.

In 2017, Derrius told The Advocate that his brother has been “in and out of prison” and that he was recently in the hospital getting treated for gunshot wounds.

His mom, Beulah, raises her youngest son, C.J., 6, in Louisiana.

Many people have described Derrius Guice’s running style as “angry.”

“People tell me, ‘Man, you run angry. If you grew up where I grew up, and you knew this game was the only thing that can get you and your family out, you’d run angry, too. Every damn time you touched the ball,” he told Bleacher Report.

5. He Already Has a Steady Fanbase

Santa called me and I had to deliver a special gift this Christmas ?? Merry Christmas Alexis?

In December, Guice got word that a very sweet little girl named Alexis Palermo wished for something very special this past Christmas. Alexis wrote a letter to Santa, telling him that she is a huge fan of LSU football and that Derrius Guice is her favorite player, “by far.” The only thing that Alexis told Santa that she wanted for Christmas was an autographed football.

“I really love LSU football and my favorite player by far is Derrius Guice. Did you know he broke a record last week? If you can get him to sign a football for me, then it would be the best gift I could ask for,” Alexis wrote.

Santa was able to pull through for Alexis, and Guice was happy to make her Christmas wish come true.

“I’m crying right now as a type this message on the way back home from New Orleans finally meeting Alexis and personally delivering her Christmas gift! I never in a million years from south Baton Rouge ever expected to be a 10 year old’s Christmas gift! You really opened my eyes little sister! Love you and had a great time hanging with you and your family,” Guice posted on Instagram on Christmas Day. 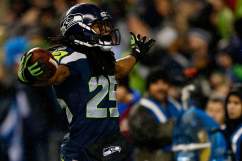 Read More
5 Fast Facts, College Fooball, Football, Louisiana, LSU, NFL
Derrius Guice will likely be a first or second round draft pick in the NFL. He is a running back for LSU and was asked inappropriate questions at the combine. Here's what you need to know.