Duke’s quest for its sixth national championship begins Thursday afternoon, when the second-seeded Blue Devils take on 15th-seeded Iona in the first round of the NCAA tournament’s Midwest region.

The game is scheduled to start at 2:45 p.m. Eastern time and will be broadcast nationally on CBS. If you don’t have cable or can’t get to a TV, you can watch the game live on your computer, phone or streaming device by signing up for one of the following cable-free, live-TV streaming services:

CBS All Access: This service lets you watch a live stream of your local CBS channel (most markets included), as well as all of CBS’ on-demand library. It’s ultimately the same as the above option, only you’re watching through CBS’ digital platform rather than Amazon’s. You can sign up for a free 7-day trial, and then you can watch on your computer via the CBS website, or on your phone, tablet or streaming device via the CBS app.

Hulu With Live TV: If you want an extensive Netflix-like on-demand streaming library in addition to live TV, Hulu now also offers a bundle of live channels, including CBS (live in select markets). You can sign up for “Hulu with Live TV” right here, and you can then watch a live stream of CBS on your computer via the Hulu website, or on your phone, tablet or streaming device via the Hulu app.

Note: You can also watch any tournament game on your computer via the March Madness Live website, or on your phone, tablet or streaming device via the March Madness Live app. To watch these streams, you’ll have a free preview before needing to sign in to a TV provider to keep watching, but if you don’t have cable, you can do this by logging in with your Hulu credentials.

The Blue Devils, among the favorites to cut down the nets next month in San Antonio, are making their 23rd straight NCAA tournament appearance, and their 10th straight as a top 4 seed.

Iona, which beat Fairfield last week to win its third straight MAAC title, is no stranger to the Big Dance, either. The Gaels are making their fifth tournament appearance in the last seven years — a stretch that included an at-large bid in 2012.

As you’d expect given where the teams are seeded, both computer models and oddsmakers have Duke (26-7) as a heavy favorite. Fivethirtyeight’s model gives the Devils a 96 percent chance to win. Villanova, which the model says has a 98 percent chance to beat Radford, is the only team in action Thursday that’s considered more of a shoo-in to advance. Sportsbooks monitored by OddsShark.com have Duke as a massive 20.5-point favorite.

Duke fans, though, know not to take games like these for granted. The Devils have been ousted in the Round of 64 twice in the past six years, first by 15th-seeded Lehigh in 2012, then by 14th-seeded Mercer in 2014.

The Gaels (20-13) finished fourth in the MAAC during the regular season. But when the top three seeds in the conference tournament were all eliminated in the quarterfinals, Iona took advantage, beating ninth-seeded Saint Peter’s in the semifinal and sixth-seeded Fairfield in the final. 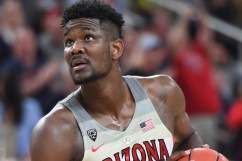