Instagram/bcartwright24 Kyron Cartwright has had the support of his family throughout his basketball career.

Kyron Cartwright has settled into the spotlight this season.

The Providence guard is the unquestioned leader of the Friars, a playmaker on both ends of the court and a sparkplug the squad is hoping will lead to a national championship run. Of course, Cartwright has the support of his team, but he’s also got a big-time support system off the court as well.

Here’s everything you need to know about Cartwright’s family:

1. He Grew up in Compton, California & Said It’s Hard to Be Away From Family

Cartwright grew up in Compton, California and he’s well aware of the connotations that go along with that particular hometown. He’s heard every question, every time someone’s used “Straight out of Compton” to describe his game, but he’s also relished the chance to shine a light on the city that shaped him – as well as several other big-name basketball players across the college and professional game.

Still, when Cartwright was deciding where to take his talents, it was difficult to commit to a program nearly three-thousand miles away from home. He told the Big East website:

Yeah it kind of is. They can make it out here maybe once a year but my dad makes it maybe two or three times. But we try and find ways to stay in contact because our schedules don’t really match up (due to the three-hour time difference). Usually when I’m getting out of class they’re still at work and by the time they get out of work it’s usually late at night here and it’s the time I’m going to sleep. So I just talk to them whenever I can.

Cartwright has got his sights set on leading the Friars to a national championship, but he’s never forgotten where he came from. Particularly when there’s plenty of reason for him to be proud of everything he accomplished. The guard averaged 18 points and nine assists in his senior year and graduated high school ranked No. 45 in the country in his position by ESPN.

2. Cartwright Credits His Father for His Interest in Basketball

Cartwright grew up on the basketball court, but he’s quick to point out that his success on the hardwood is because of one person – his father.

Anthony Cartwright did his best to keep both of his sons on the right path while they were growing up and, as far as he was concerned, that meant playing as much basketball as possible. And for good reason. Anthony also grew up in Compton and knew the road plenty of his friends had gone down. In fact, when asked if he saw the film Straight Out of Compton, he replied with a very simple answer: “I lived it.”

So, Cartwright kept playing, competing with his father as his AAU coach and focusing on getting better every single day. “I never had time to do anything else,” he told the Providence Journal. “I was always playing.”

3. His Father Worked for Compton’s Parks and Recreation department 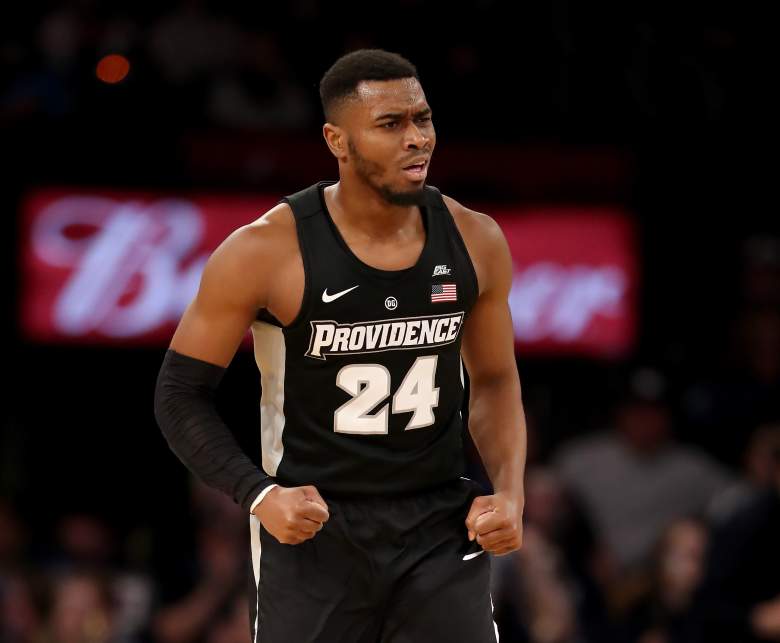 Cartwright almost always had a basketball in his hand when he was a kid, but he also always had a place to play. His father, Anthony, works as a recreation supervisor for the Compton Parks and Recreation Department and made sure his son had a hoop at his disposal whenever he wanted to fine-tune his jump shot.

Anthony worked, primarily, at Lueders Park in Compton, but was able to get his son access to just about any gym in the city.  And the work all paid off in the end, for both father and son.

“I always told him to never be satisfied and always continue to work hard,” Anthony told The Grunion. “He’s one of the most gifted players I’ve seen and he’s got so much untapped potential even as good as he is.”

Cartwright isn’t the only basketball star in the family.

His older brother Bryce also competed at the Division I level, playing for Iowa from 2010 to 2012. Prior to competing for the Hawkeyes, Bryce also spent a season at Fresno State and a year at Paris Junior College.

It was at Iowa, however, that he truly hit his stride, particularly in his senior season of play. Bryce played in 32 games his final season on the hardwood, serving as the team’s co-captain and averaging six points, 2.4 rebounds and a team-best 4.8 assists.

Bryce is still heavily involved in basketball and while his playing days are behind him, he is the founder and executive director at Make Room Basketball and Training. The company, per its website, is “devoted to teaching skills and instilling integrity and hard work into young men and women through the sport of basketball. Our program offers youth in Southern California a high standard of athletic programming.”

5. Cartwright & His Family Originally Wanted Him to Play College Hoops in California

Cartwright was a solid player at Compton High School, but he went, relatively, unnoticed by many of the big-name college basketball programs in the area – including USC. The future Providence star and his family both hoped he would be able to stay close to home, but the Trojans passed on Cartwright and he’s used that his advantage for the past few seasons.

In fact, when the Friars squared off against USC in the first round oft he NCAA Tournament last year, Cartwright told the Los Angeles Times he was excited at the prospect of taking on a team he had, at one point hoped to play for. He said:

I was kind of overlooked. Obviously, growing up in Southern California it would be nice to be recruited from a school like USC. Unfortunately it didn’t happen, but I’m happy at Providence and very excited to play there.

Cartwright had offers from Cal State Fullerton, Loyola Marymount, New Mexico, San Diego and Providence coming out of college and realized, in the end, the Friars were the perfect fit.